Primitive AchondriteAchondrite with an almost chondritic composition with age similar to the primordial chondrites. These should be better classified as "metachondrites"., ungroupedModifying term used to describe meteorites that are mineralogically and/or chemically unique and defy classification into the group or sub-group they most closely resemble. Some examples include Ungrouped Achondrite (achondrite-ung), Ungrouped Chondrite (chondrite-ung), Ungrouped Iron (iron-ung), and Ungrouped Carbonaceous (C-ung).
(impact melt rockRock that has been made temporarily molten as a result of the energy released by the impact of a large colliding body. Impact melts include small particles, known as "impact melt spherules" that are splashed out of the impact crater, and larger pools and sheets of melt that collect in)

Found February 2003
no coordinates disclosed A 221.33 g, fusion-crusted, partly broken stone was found in the Sahara Desert by the French team of Caillou Noir under the organization of Michel Franco. A 21.36 g section of Sahara 03500 was provided to the Université Pierre & Marie Curie in Paris (A. Jambon and O. Boudoma; #5272) for analysis, and a smaller 2.0 g sample to the Université Blaise Pascal in Clermont–Ferrand (B. Devouard).

Centimeter-size raised metallic clasts are present over the regmaglypted surface, the result of selective ablationGradual removal of the successive surface layers of a material through various processes. • The gradual removal and loss of meteoritic material by heating and vaporization as the meteoroid experiences frictional melting during its passage through the atmosphere. The resulting plasma ablates the meteor and, in cases where a meteor processes on the rounded metal–sulfide globules that occur throughout (~16 vol%). Inside these pyrrhotiteIron sulfide group of minerals whose composition ranges widely between its end members pyrrhotite (Fe7S8) whose crystal structure is monoclinic, and troilite (FeS) whose crystal structure is hexagonal. Its general formula is Fe1−xS (where x = 0 to 0.17). The troilite phase is found mainly in meteorites and in the globules there is a visible texture resulting from dendritic exsolutionSegregation, during cooling, of a homogeneous solid solution into two or more different solids. of kamaciteMore common than taenite, both taenite and kamacite are Ni-Fe alloys found in iron meteorites. Kamacite, α-(Fe,Ni), contains 4-7.5 wt% Ni, and forms large body-centered cubic crystals that appear like broad bands or beam-like structures on the etched surface of a meteorite; its name is derived from the Greek word or taeniteLess common than kamacite, both taenite and kamacite are Ni-Fe alloys found in iron meteorites. Taenite, γ-(Fe,Ni), has 27-65 wt% Ni, and forms small crystals that appear as highly reflecting thin ribbons on the etched surface of a meteorite; the name derives from the Greek word for "ribbon.". Smaller globules and sub-mm-sized FeNi-metal grains have associated phosphides. The meteoriteWork in progress. A solid natural object reaching a planet’s surface from interplanetary space. Solid portion of a meteoroid that survives its fall to Earth, or some other body. Meteorites are classified as stony meteorites, iron meteorites, and stony-iron meteorites. These groups are further divided according to their mineralogy and exhibits an unusual light gray-green color. The silicateThe most abundant group of minerals in Earth's crust, the structure of silicates are dominated by the silica tetrahedron, SiO44-, with metal ions occurring between tetrahedra). The mesodesmic bonds of the silicon tetrahedron allow extensive polymerization and silicates are classified according to the amount of linking that occurs between the matrixFine grained primary and silicate-rich material in chondrites that surrounds chondrules, refractory inclusions (like CAIs), breccia clasts and other constituents. is composed of olivineGroup of silicate minerals, (Mg,Fe)2SiO4, with the compositional endpoints of forsterite (Mg2SiO4) and fayalite (Fe2SiO4). Olivine is commonly found in all chondrites within both the matrix and chondrules, achondrites including most primitive achondrites and some evolved achondrites, in pallasites as large yellow-green crystals (brown when terrestrialized), in the silicate portion and orthopyroxeneOrthorhombic, low-Ca pyroxene common in chondrites. Its compositional range runs from all Mg-rich enstatite, MgSiO3 to Fe-rich ferrosilite, FeSiO3. These end-members form an almost complete solid solution where Mg2+ substitutes for Fe2+ up to about 90 mol. % and Ca substitutes no more than ~5 mol. % (higher Ca2+ contents occur and has an igneous texture consistent with impact-melting and rapid cooling at the surface (Jambon et al., 2005). Small feldspathic glassy shock veins are scattered throughout the meteorite. The bulk composition of Sahara 03500 is similar to that of LL chondritesChondrites are the most common meteorites accounting for ~84% of falls. Chondrites are comprised mostly of Fe- and Mg-bearing silicate minerals (found in both chondrules and fine grained matrix), reduced Fe/Ni metal (found in various states like large blebs, small grains and/or even chondrule rims), and various refractory inclusions (such, but with a higher K/Na ratio, an enrichment in LREE, and a depletion in siderophile elements. An oxygenElement that makes up 20.95 vol. % of the Earth's atmosphere at ground level, 89 wt. % of seawater and 46.6 wt. % (94 vol. %) of Earth's crust. It appears to be the third most abundant element in the universe (after H and He), but has an abundance only isotopeOne of two or more atoms with the same atomic number (Z), but different mass (A). For example, hydrogen has three isotopes: 1H, 2H (deuterium), and 3H (tritium). Different isotopes of a given element have different numbers of neutrons in the nucleus. analysis is currently underway which could help resolve the nature of its parent bodyThe body from which a meteorite or meteoroid was derived prior to its ejection. Some parent bodies were destroyed early in the formation of our Solar System, while others like the asteroid 4-Vesta and Mars are still observable today.. Sahara 03500 exhibits minor terrestrial weathering (W1) in the form of carbonateMineral or compound containing carbon and oxygen (i.e. calcium carbonate, CaCO3, calcite). veins. The specimen of Sahara 03500 shown above is a 0.80 g ultrathin part slice. Two views of the complete slice from which this specimen was removed can be seen below; the magnified view shows the coarse exsolution (graphic) texture of the large metal–sulfide globules. A photo of the main massLargest fragment of a meteorite, typically at the time of recovery. Meteorites are commonly cut, sliced or sometimes broken thus reducing the size of the main mass and the resulting largest specimen is called the "largest known mass". as found is shown courtesy of Michel Franco. 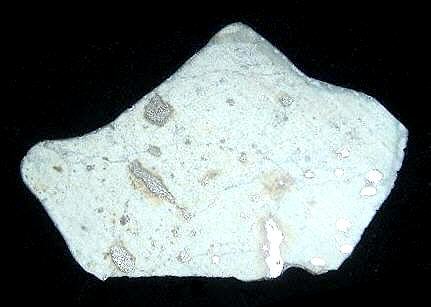 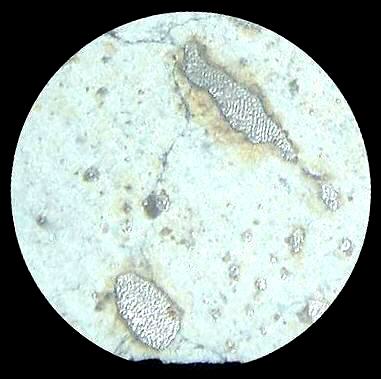 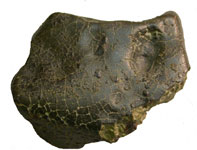