AchondriteAn achondrite is a type of stony meteorite whose precursor was of chondritic origin and experienced metamorphic and igneous processes. They have a planetary or differentiated asteroidal origin where the chondritic parent body reached a sufficient size that through heating due to radioactive decay of 26Al (aluminum isotope) and gravitational, ungroupedModifying term used to describe meteorites that are mineralogically and/or chemically unique and defy classification into the group or sub-group they most closely resemble. Some examples include Ungrouped Achondrite (achondrite-ung), Ungrouped Chondrite (chondrite-ung), Ungrouped Iron (iron-ung), and Ungrouped Carbonaceous (C-ung).
Olivine-orthopyroxenite
(possibly winonaite-related) 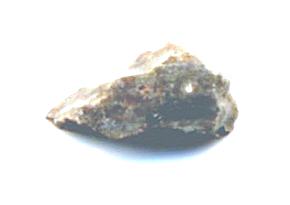 Found November 15, 2002
19° 24.3′ N., 54° 34.7′ E. A single moderately weathered meteoriteWork in progress. A solid natural object reaching a planet’s surface from interplanetary space. Solid portion of a meteoroid that survives its fall to Earth, or some other body. Meteorites are classified as stony meteorites, iron meteorites, and stony-iron meteorites. These groups are further divided according to their mineralogy and weighing 17 g was found in the Dhofar region of Oman. Dhofar 732 was classified at the Vernadsky Institute, Russia (S. Demidova) and the Naturhistorisches Museum, Austria (G. Kurat) as an ungrouped achondrite. Dhofar 732 is an olivineGroup of silicate minerals, (Mg,Fe)2SiO4, with the compositional endpoints of forsterite (Mg2SiO4) and fayalite (Fe2SiO4). Olivine is commonly found in all chondrites within both the matrix and chondrules, achondrites including most primitive achondrites and some evolved achondrites, in pallasites as large yellow-green crystals (brown when terrestrialized), in the silicate portion orthopyroxeniteA rock composed primarily of orthopyroxene. Non-terrestrial orthopyoxenites include diogenites and a single martian meteorite, ALH 84001, that was found in the Allan Hills region of Antarctica in 1984. ALH 84001 is a cumulate rock consisting of 97% coarse-grained, Mg-rich orthopyroxene, with small amounts of plagioclase, chromite, and carbonate. It petrographically similar to the aubritesAubrites are named for the Aubres meteorite that fell in 1836 near Nyons, France. They are an evolved achondrite that is Ca-poor and composed mainly of enstatite (En100) and diopside (En50Wo50) with minor amounts of olivine (Fa0) and traces of plagioclase (An2-8).  They contain large white crystals of enstatite as, diogenitesDiogenites belong to the evolved achondrite HED group that also includes howardites and eucrites. They are named after the Greek philosopher Diogenes of Apollonia, of the 5th century BCE, who was the first to suggest that meteorites come from outer space (a realization forgotten for over 2,000 years). They are, and the unique martian ALH 84001, but it is unlike any of these orthopyroxenite meteorites in its mineralogical, chemical, and O-isotopic compositions. It is composed of 68 vol% lath-shaped orthopyroxeneOrthorhombic, low-Ca pyroxene common in chondrites. Its compositional range runs from all Mg-rich enstatite, MgSiO3 to Fe-rich ferrosilite, FeSiO3. These end-members form an almost complete solid solution where Mg2+ substitutes for Fe2+ up to about 90 mol. % and Ca substitutes no more than ~5 mol. % (higher Ca2+ contents occur grains (enstatiteA mineral that is composed of Mg-rich pyroxene, MgSiO3. It is the magnesium endmember of the pyroxene silicate mineral series - enstatite (MgSiO3) to ferrosilite (FeSiO3)., up to 0.8 mm), 16 vol% olivine grains (up to 0.3 mm), and 16 vol% mesostasisLast material to crystallize/solidify from a melt. Mesostasis can be found in both chondrules, in the matrix around chondrules, and in achondrites as interstitial fine-grained material such as plagioclase, and/or as glass between crystalline minerals.   (consisting of Ca–Al-rich, Na-poor glass, Cr–Al–Ti-rich clinopyroxene [augite], and silicaSilicon dioxide, SiO2.). Accessory chromiteBrownish-black oxide of chromium and iron (Cr-Fe oxide), Cr2FeO4, found in many meteorite groups., troiliteBrass colored non-magnetic mineral of iron sulfide, FeS, found in a variety of meteorites., and FeNi-metal are also present. The rock contains abundant round voids throughout. The very low Fe/Mn value of orthopyroxene distinguishes Dhofar 732 from diogenites, including Dhofar 700 which was found in the same vicinity on the same day.

Greenwood et al. (2007) report that O-isotope and mineralogical data suggest a possible relationship might exist between Dhofar 732 and winonaites, as it plots along an extension of the trend line of the silicateThe most abundant group of minerals in Earth's crust, the structure of silicates are dominated by the silica tetrahedron, SiO44-, with metal ions occurring between tetrahedra). The mesodesmic bonds of the silicon tetrahedron allow extensive polymerization and silicates are classified according to the amount of linking that occurs between the component of the winonaite–IAB iron complex meteorites (see diagram below).

Diagram credit: Greenwood et al., Chemie der Erde, vol. 77, p. 23 (2017)
‘Melting and differentiationA process by which a generally homogeneous chondritic body containing mostly metal, silicates and sulfides will melt and form distinct (differentiated) layers of different densities.   When the melting process continues for a long enough period of time, the once chondritic body will re-partition into layers of different composition including of early-formed asteroids: The perspective from high precision oxygenElement that makes up 20.95 vol. % of the Earth's atmosphere at ground level, 89 wt. % of seawater and 46.6 wt. % (94 vol. %) of Earth's crust. It appears to be the third most abundant element in the universe (after H and He), but has an abundance only isotopeOne of two or more atoms with the same atomic number (Z), but different mass (A). For example, hydrogen has three isotopes: 1H, 2H (deuterium), and 3H (tritium). Different isotopes of a given element have different numbers of neutrons in the nucleus. studies’
(open access: http://dx.doi.org/10.1016/j.chemer.2016.09.005) However, the low Na content of Dhofar 732 cannot be reconciled with this or any other known meteorite groups. It was suggested by Demidova et al. (2004) that this meteorite could represent a cumulateIgneous rock composed of crystals that have grown and accumulated (often by gravitational settling) in a cooling magma chamber. that was derived from a melt source initially accreted from isolated forsteritePure* magnesium end-member (Mg2SiO4) of the olivine solid solution series and an important mineral in meteorites. When magnesium (Mg) is completely substituted by iron, it yields the the pure Fe-olivine end member, fayalite (Fe2SiO4). The various Fe and Mg substitutions between these two end-members are described based on their forsteritic (Fo) and enstatite grains, components which have been identified in some CM and CR chondritesChondrites are the most common meteorites accounting for ~84% of falls. Chondrites are comprised mostly of Fe- and Mg-bearing silicate minerals (found in both chondrules and fine grained matrix), reduced Fe/Ni metal (found in various states like large blebs, small grains and/or even chondrule rims), and various refractory inclusions (such. Indeed, O-isotopic ratios similar to those in Dhofar 732 have been established for CR chondrites as well. The specimen shown above is a small 8 mg partial slice of Dhofar 732. The photo below shows the main massLargest fragment of a meteorite, typically at the time of recovery. Meteorites are commonly cut, sliced or sometimes broken thus reducing the size of the main mass and the resulting largest specimen is called the "largest known mass". of this meteorite in situ. 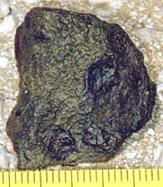