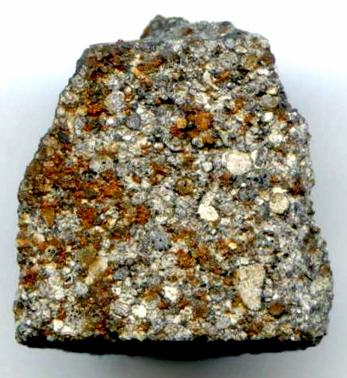 Fell July 15, 1878
49° 36′ N., 17° 7′ E. A single 27.4 kg stone was seen and heard to fallMeteorite seen to fall. Such meteorites are usually collected soon after falling and are not affected by terrestrial weathering (Weathering = 0). Beginning in 2014 (date needs confirmation), the NomComm adopted the use of the terms "probable fall" and "confirmed fall" to provide better insight into the meteorite's history. If at 1:45 in the afternoon in Prostejov, Jihomoravsky, Czechoslovakia. Analysis was conducted at the Museum of the Technical High School of Brünn, and Tieschitz was classified as an unbrecciated, unequilibrated ordinary chondriteWork in Progress Ordinary chondrites (OCs) are the largest meteorite clan, comprising approximately 87% of the global collection and 78% of all falls (Meteoritical Society database 2018)1. Meteorites & the Early Solar System: page 581 section 6.1 OC of type 5 or 6 with an apparent shock stage of S1, with a shock stageA petrographic assessment, using features observed in minerals grains, of the degree to which a meteorite has undergone shock metamorphism. The highest stage observed in 25% of the indicator grains is used to determine the stage. Also called "shock level".               of S1/S2. This meteoriteWork in progress. A solid natural object reaching a planet’s surface from interplanetary space. Solid portion of a meteoroid that survives its fall to Earth, or some other body. Meteorites are classified as stony meteorites, iron meteorites, and stony-iron meteorites. These groups are further divided according to their mineralogy and has preserved the early record of large-grained, pristine chondritesChondrites are the most common meteorites accounting for ~84% of falls. Chondrites are comprised mostly of Fe- and Mg-bearing silicate minerals (found in both chondrules and fine grained matrix), reduced Fe/Ni metal (found in various states like large blebs, small grains and/or even chondrule rims), and various refractory inclusions (such.

Diagram credit: M. Szurgot, 47th LPSC, #2180 (2016)
Amean based on chemical composition (Eq. 1), Fe/Si atomic ratio (Eq. 2), and grain density (Eq. 3) A hypothesis was presented by Trigo-Rodríguez and Williams (2016) to explain the notable coincidence in the timing of the four known H/L chondrite falls—all occurring within a three month period: Bremervorde on May 13, 1855; Famenin on June 27, 2015; Cali on July 6, 2007; and Tieschitz on July 15, 1878. The probability that all of the H/L meteorite falls would occur within this specific timeframe completely by chance was calculated to be only 6%. Trigo-Rodríguez and Williams (2016) consider that these H/L chondrites could be associated with the Bejar bolideA very bright fireball that breaks apart in the atmosphere with a minimum brightness approximately equivalent to the full moon. that was tracked by the Spanish MeteorHow long Sonic booms Of the several 10s of tons of cosmic material entering Earth's atmosphere each day, only about one ton reaches the surface. An object's chance of survival depends on its initial mass, speed and angle of entry, and friability (tendency to break up). Micrometeoroids radiate heat so Network above Salamanca, Spain on July 11, 2008, and also fortuously photographed from Madrid by Javier Pérez Vallejo. Based on the available data, an orbital solution was constructed for this bolide which is consistent with a high-inclination orbitThe elliptical path of one body around another, typically the path of a small body around a much larger body. However, depending on the mass distribution of the objects, they may rotate around an empty spot in space • The Moon orbits around the Earth. • The Earth orbits around, and it is considered that it could represent material from the disruption of cometConglomeration of frozen water and gases (methane, ammonia, CO2) and silicates that that formed in the outer solar system and orbits the Sun. In recent years, the description of comets has shifted from dirty snowballs to snowy dirtballs with more dust than ice. However, the ratio is less than 10-to-1. C/1919 Q2 Metcalf (see diagram below). They also propose that the Bejar bolide along with the H/L chondrites could be associated with the Omicron Draconids meteor streamRelatively narrow band of meteoroids stretched out along the orbital path of a comet. It consists of dust released from the nucleus of a comet during its perihelion passage. The dust grains escape the weak gravity of the nucleus and travel on their own independent, heliocentric orbits. Although these orbits which was shown by A. Cook to follow a similar orbit as comet C/1919 Q2 Metcalf. As demonstrated by Martínez-Jiménez et al. (2016) in their study of the Cali meteorite, not all H/L chondrites show such obvious features of aqueous alteration as those present in Tieschitz. Therefore, the H/L parent asteroid could be heterogeneous with respect to aqueous alteration, or alternatively, it could be a rubble pile composed of a broad diversity of material with variable densitiesMass of an object divided by its volume. Density is a characteristic property of a substance (rock vs. ice, e.g.). Some substances (like gases) are easily compressible and have different densities depending on how much pressure is exerted upon them. The Sun is composed of compressible gases and is much and metamorphic histories.

Diagram credit: Josep M. Trigo-Rodríguez/SPMN Other meteorites assigned to this intermediate chondrite group include Famenin [3.8–3.9], Bremervörde [3.9], NWA 1955 [3–4], Haxtun [4], Yamato 74645 [4], Cali [4], and Yamato 8424; initial studies of Dhofar 008 indicate that it might also belong to this group. The specimen of Tieschitz shown above is a 4.8 g interior cut fragment, and the bottom image is an excellent petrographic thin sectionThin slice or rock, usually 30 µm thick. Thin sections are used to study rocks with a petrographic microscope. micrograph of Tieschitz, shown courtesy of Peter Marmet.