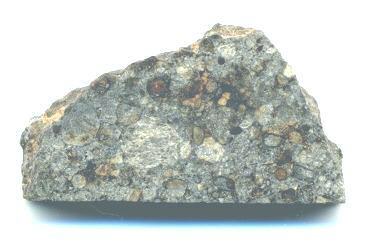 Found October 2002
no coordinates recorded A single meteoriteWork in progress. A solid natural object reaching a planet’s surface from interplanetary space. Solid portion of a meteoroid that survives its fall to Earth, or some other body. Meteorites are classified as stony meteorites, iron meteorites, and stony-iron meteorites. These groups are further divided according to their mineralogy and weighing 68.2 g was purchased by a team of American collectors in Safsaf, Morocco. This ordinary chondriteWork in Progress Ordinary chondrites (OCs) are the largest meteorite clan, comprising approximately 87% of the global collection and 78% of all falls (Meteoritical Society database 2018)1. Meteorites & the Early Solar System: page 581 section 6.1 OC of type 5 or 6 with an apparent shock stage of S1, is a monomict brecciaType of breccia whose clasts are composed of a single (mono-) rock type, possibly all from a single rock unit (e.g., L6 with L6). Monomict breccias are rare on the Moon because meteoroid impacts tend to mix different kinds of rocks. The example is a terrestrial granite breccia. Image Source: that belongs to the LL chondriteOrdinary chondrites ("low Fe" / "low metal") with only 1 to 3% free metal. Their olivine is more Fe-rich than in the other ordinary chondrites (Fa27-32), implying that the LL types must have formed under more oxidizing conditions than their H or L cousins. Orthopyroxene compositions are also Fe-the rich group. It has a low shock stageA petrographic assessment, using features observed in minerals grains, of the degree to which a meteorite has undergone shock metamorphism. The highest stage observed in 25% of the indicator grains is used to determine the stage. Also called "shock level".               of S1 and a weathering grade of W1/2. A thorough analysis of NWA 1756 was conducted at Northern Arizona University (T. Bunch and J. Wittke). Based on texture and TL sensitivity data, though the latter method has shortcomings in distinguishing between types 3.0 and 3.1, it was determined that NWA 1756 is consistent with a LL3.0 subtype. ChondrulesRoughly spherical aggregate of coarse crystals formed from the rapid cooling and solidification of a melt at  ~1400 ° C. Large numbers of chondrules are found in all chondrites except for the CI group of carbonaceous chondrites. Chondrules are typically 0.5-2 mm in diameter and are usually composed of olivine in NWA 1756 are closely similar to those in the highly unequilibrated LL chondriteChondrites are the most common meteorites accounting for ~84% of falls. Chondrites are comprised mostly of Fe- and Mg-bearing silicate minerals (found in both chondrules and fine grained matrix), reduced Fe/Ni metal (found in various states like large blebs, small grains and/or even chondrule rims), and various refractory inclusions (such Semarkona with respect to compositions, zoning profiles, and textures. 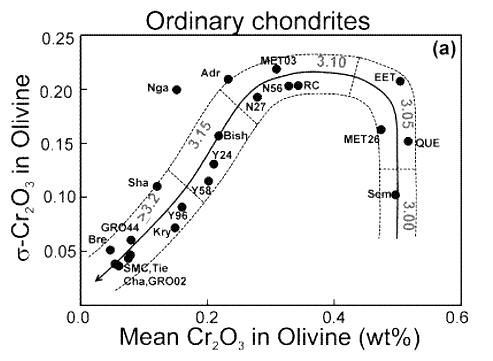 Image credit: J. N. Grossman & A. J. Brearley
MAPS, vol. 40, #1, p. 87 (2005)
‘The onset of metamorphism in ordinary and carbonaceous chondrites’
(http://dx.doi.org/10.1111/j.1945-5100.2005.tb00366.x) Following the scheme of J. Grossman and A. Brearley (2005), the LL chondrite Semarkona, the L chondriteOrdinary chondrites low in free Ni-Fe metal (4 to 10 vol. %), containing olivine (Fa22-26) and the orthopyroxene hypersthene (Fs19-22). Average chondrule diameters (0.7 mm) are larger than those in H chondrites. The asteroid 433 Eros is suspected as a parent body, based on reflectance spectra, but most L chondrites NWA 7731, and the ungrouped (probably CO-related; Simon and Grossman, 2015) carbonaceous chondrite Acfer 094 (Kimura et al., 2006), have been assigned to the least equilibrated subtype 3.00; however, Semarkona has more recently been determined to represent a petrologic subtype of 3.01. This specific metamorphic type for Semarkona is also consistent with findings based on the FeNi-metal component, the features of which provide one of the most sensitive indicators for the onset of thermal metamorphism. The technique reveals that primary martensite decomposes to fine-grained plessiteA fine-grained intergrowth of kamacite and taenite that fills in the wedges between wide kamacite and taenite bands in octahedrites. The name derives from the Greek word for "filling." during very low degrees of thermal metamorphism in Semarkona, but which did not occurred in Acfer 094 (Kimura et al., 2008). Furthermore, they found that metal in and around Semarkona chondrules does not show a solar ratio of Co/Ni like that in Acfer 094, reflecting the greater degree of metamorphism that affected Semarkona. Moreover, low temperature aqueous alteration has occurred in Semarkona as attested by the presence of secondary alteration products such as smectite. Kimura et al. (2008) also argue for the inclusionFragment of foreign (xeno-) material enclosed within the primary matrix of a rock or meteorite. of the carbonaceous chondrites of groups CR, CH, CB, and CM as 3.00 type specimens, notwithstanding their general designation as type 2 due to aqueous alteration features. In light of this petrologic typing paradox, they propose that a separate scale be adopted to describe aqueous alteration distinct from that which describes thermal metamorphism. Other work has shown that the CO-group meteorite ALHA77307 is consistent with a type 3.03, while three ordinary chondrites—QUE 97008, MET 00526, and EET 90161—have been assigned the next lowest petrologic subtype of 3.05; several meteorites share the less rigorously defined 3.1 subtype. Northwest Africa 1756 is a highly unequilibrated primitive chondrite which is among the very few to have escaped significant metamorphic processes on their parent bodies, and which preserve their primordial features. In a study of unequilibrated ordinary chondrites, Metzler (2011) found cm-sized clasts in NWA 1756 and other UOCs which exhibit low matrix abundances and have features of deformation consistent with hot, plastic collisions which occurred over a short interval during the earliest chondrule formation events in the protoplanetary diskFlattened and rotating disk of dense gas and dust/solids orbiting a young star from which planets can eventually form.  . He has named these primary accretionary clasts ‘cluster chondrites’, and has demonstrated that the chondrule apparent size is inversely correlated with the degree of deformation. Utilizing the MIT Magellan telescope in Chile and NASA’s Infrared Telescope Facility in Hawaii, a compositional analysis of the ~270 m diameter near-Earth asteroidAsteroids with orbits that bring them within 1.3 AU (195 million km) of the Sun. NEAs are a dynamically young population whose orbits evolve on 100-million-year time scales because of collisions and gravitational interactions with the Sun and the terrestrial planets. These asteroids are probably ejected from the main belt Apophis was obtained (Binzel et al., 2007). These results have been shown to be comparable to the composition measured for LL chondrites measured in the lab. The photo above shows a 1.16 g specimen of NWA 1756.