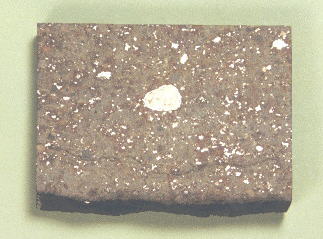 Found 1937
36° 13′ N., 103° 39′ W. Many individual stones and fragments of this meteoriteWork in progress. A solid natural object reaching a planet’s surface from interplanetary space. Solid portion of a meteoroid that survives its fall to Earth, or some other body. Meteorites are classified as stony meteorites, iron meteorites, and stony-iron meteorites. These groups are further divided according to their mineralogy and were recovered in township 25, range 30E., in Union County, New Mexico, which is a very arid region. The total recovered weight was 44.4 kg.

The L-chondrite parent bodyThe body from which a meteorite or meteoroid was derived prior to its ejection. Some parent bodies were destroyed early in the formation of our Solar System, while others like the asteroid 4-Vesta and Mars are still observable today. experienced a catastrophic breakup event 470 (±6) m.y. ago. This refined age estimate was determined by utilizing multiple 40Ar–39Ar isochrons to successfully resolve the various trapped components and then correct for any excess Ar (Korochantseva et al., 2007). This violent planetesimal breakup resulted in the loss of a primordial gas component, after which a period of slow cooling ensued which may be indicative of its re-accretion into a rubble-pile asteroid. Evidence attesting to this disruption has been found in the form of a high abundance of relict, fossil meteorites (101 found to date; Schmitz et al., 2014) in mid-Ordovician marine (seafloor) limestoneA common form of calcium carbonate (CaCO3). Other common forms of CaCO3 include chalk and marble. quarries, including the Thorsberg quarry in southern Sweden (e.g., Österplana), the Hällekis quarry, the Gullhögen quarry in southern Sweden, and the Gäde quarry in central Sweden (e.g., Brunflo). Sediment-dispersed extraterrestrial chromiteBrownish-black oxide of chromium and iron (Cr-Fe oxide), Cr2FeO4, found in many meteorite groups. grains have been found in these quarries, as well as in coincident sediment beds from the Puxi River in south-central China and the Lynna River in Russia; some of these chromite grains have been demonstrated to be regolith-derived (Meier et al., 2013). It was ascertained that the elemental and O-isotopic compositions of the surviving chromite grains from the fossil meteorites were most consistent with an L-group chondritic parent body, and remnant chondruleRoughly spherical aggregate of coarse crystals formed from the rapid cooling and solidification of a melt at  ~1400 ° C. Large numbers of chondrules are found in all chondrites except for the CI group of carbonaceous chondrites. Chondrules are typically 0.5-2 mm in diameter and are usually composed of olivine abundances, textures, and mean diameters are consistent with this finding (Bridges et al., 2007 and references therein). The O-isotopic composition of the sediment-dispersed extraterrestrial chromite grains was determined by Heck et al. (2009) through a SIMS study. Measurements of several fossil meteorites, along with numerous chromite grains obtained from various quarries, have oxygenElement that makes up 20.95 vol. % of the Earth's atmosphere at ground level, 89 wt. % of seawater and 46.6 wt. % (94 vol. %) of Earth's crust. It appears to be the third most abundant element in the universe (after H and He), but has an abundance only three-isotope values most consistent with modern L chondritesChondrites are the most common meteorites accounting for ~84% of falls. Chondrites are comprised mostly of Fe- and Mg-bearing silicate minerals (found in both chondrules and fine grained matrix), reduced Fe/Ni metal (found in various states like large blebs, small grains and/or even chondrule rims), and various refractory inclusions (such, but overlap with LL chondrites. The size range of the chromite grains was established on the parent body by means of varying degrees of metamorphism, and this range was shown to have a direct correspondence to the petrologic typeMeasure of the degree of aqueous alteration (Types 1 and 2) and thermal metamorphism (Types 3-6) experienced by a chondritic meteorite. Type 3 chondrites are further subdivided into 3.0 through 3.9 subtypes. of the fossil meteorites as follows:

Diagram credit: Binzel et al., 47th LPSC, #1352 (2016) Thereafter, L chondrite material would have been delivered to the more efficient, albeit slower, 3:1 mean motion resonance at 2.50 AU (and the less important ν6 secular resonance) where transfer to Earth occurred over an extended period of millions of years. In consideration of such factors as pre-breakup size, breakup age, and shock-darkening history of the parent asteroid, they contend that the Ino asteroid family may be a more plausible source than the Gefion family (see the Park Forest page for further details).

Diagram credit: Meier et al., MAPS, vol. 52, p. 1569 (2017)
‘Park Forest (L5) and the asteroidal source of shocked L chondrites’
(http://dx.doi.org/10.1111/maps.12874) At least one further impact event on the L-chondrite parent body is recorded ~20 m.y. ago, which produced abundant fragments and caused severe shock effects and significant radiogenic gas loss. A portion of the fragments eventually found their way into Earth-crossing resonances, and they are currently one of the most well represented meteorite groups seen to fallMeteorite seen to fall. Such meteorites are usually collected soon after falling and are not affected by terrestrial weathering (Weathering = 0). Beginning in 2014 (date needs confirmation), the NomComm adopted the use of the terms "probable fall" and "confirmed fall" to provide better insight into the meteorite's history. If. The specimen of Beenham shown above is a 29.0 g partial slice with a large troiliteBrass colored non-magnetic mineral of iron sulfide, FeS, found in a variety of meteorites. inclusion at its center. For additional information on these fossil meteorites, read these PSRD articles:
‘Tiny Traces of a Big Asteroid Breakup‘, by Linda M. V. Martel, March 2004
‘Searching for Ancient Solar System Materials on the Moon, Earth, and Mars‘, by G. Jeffrey Taylor, November 2016