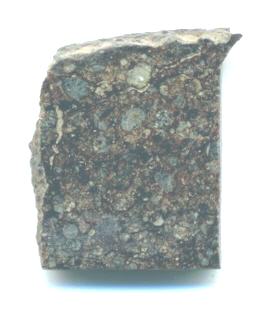 purchased
no coordinates recorded A 125.39 g meteoriteWork in progress. A solid natural object reaching a planet’s surface from interplanetary space. Solid portion of a meteoroid that survives its fall to Earth, or some other body. Meteorites are classified as stony meteorites, iron meteorites, and stony-iron meteorites. These groups are further divided according to their mineralogy and was found in the Sahara Desert and later purchased by American collector N. Oakes. A sample was submitted to Arizona State University, Center for Meteorite Studies (G. Huss), and NWA 3132 was determined to be a rare EL3 chondriteChondrites are the most common meteorites accounting for ~84% of falls. Chondrites are comprised mostly of Fe- and Mg-bearing silicate minerals (found in both chondrules and fine grained matrix), reduced Fe/Ni metal (found in various states like large blebs, small grains and/or even chondrule rims), and various refractory inclusions (such composed almost entirely of orthopyroxeneOrthorhombic, low-Ca pyroxene common in chondrites. Its compositional range runs from all Mg-rich enstatite, MgSiO3 to Fe-rich ferrosilite, FeSiO3. These end-members form an almost complete solid solution where Mg2+ substitutes for Fe2+ up to about 90 mol. % and Ca substitutes no more than ~5 mol. % (higher Ca2+ contents occur. Although almost no metalElement that readily forms cations and has metallic bonds; sometimes said to be similar to a cation in a cloud of electrons. The metals are one of the three groups of elements as distinguished by their ionization and bonding properties, along with the metalloids and nonmetals. A diagonal line drawn or sulfide is present, vestigial signs of metal can be seen throughout the meteorite. This enstatite chondriteType of meteorite high in the mineral enstatite and also referred to as E-chondrites. Although they contain substantial amounts of Fe, it is in the form of Ni-Fe metal or sulfide rather than as oxides in silicates. Their highly reduced nature indicates that they formed in an area of the has a shock stageA petrographic assessment, using features observed in minerals grains, of the degree to which a meteorite has undergone shock metamorphism. The highest stage observed in 25% of the indicator grains is used to determine the stage. Also called "shock level".               of S2 and a weathering grade of W4. An unequilibrated petrologic typeMeasure of the degree of aqueous alteration (Types 1 and 2) and thermal metamorphism (Types 3-6) experienced by a chondritic meteorite. Type 3 chondrites are further subdivided into 3.0 through 3.9 subtypes. 3 sample is quite rare among EL-group members, and is thus far represented primarily by Antarctic meteorites including ALH 85119, A-881314, A-882067, EET 90299/90992, MAC 88136 pairing group, MAC 02635, MAC 02837/02839, QUE 93351 pairing group, LAP 03930, and PCA 91020, along with EL3 xenoliths identified in the carbonaceous chondriteCarbonaceous chondrites represent the most primitive rock samples of our solar system. This rare (less than 5% of all meteorite falls) class of meteorites are a time capsule from the earliest days in the formation of our solar system. They are divided into the following compositional groups that, other than Kaidun (designated Kaidun IV) and in the ureilite Almahata Sitta.

With the exception of the transitional EH/L chondrite Y-793225, E chondritesChondrites are the most common meteorites accounting for ~84% of falls. Chondrites are comprised mostly of Fe- and Mg-bearing silicate minerals (found in both chondrules and fine grained matrix), reduced Fe/Ni metal (found in various states like large blebs, small grains and/or even chondrule rims), and various refractory inclusions (such have been historically assigned to one of two distinct groups—a high-Fe, high-siderophile (EH) group, and a low-Fe, low-siderophile (EL) group. Surprisingly, it has been demonstrated by Macke et al. (2009) that these two groups do not actually differ in their iron content, and that they are indistinguishable in densityMass of an object divided by its volume. Density is a characteristic property of a substance (rock vs. ice, e.g.). Some substances (like gases) are easily compressible and have different densities depending on how much pressure is exerted upon them. The Sun is composed of compressible gases and is much, porosityThe volume percentage of a rock that consists of void space. Vesicular porosity is a type of porosity resulting from the presence of vesicles, or gas bubbles, in igneous rock such as the pumice presented here. Vesicular porosity is very rare in meteorites and is often associated with slag, one, and magnetic susceptibility as well. However, differences in siderophile, chalcophile, and other mineralogical abundances can be employed to distinguish the two groups. From comparisons of elemental abundance ratios between the EH and EL groups, it has been demonstrated that values for all elements except the refractory siderophiles are consistently lower in the EL group than in the EH group. Certain elemental ratios (e.g. La/Sm, Sb/Ir) easily resolve the two groups. Furthermore, the following mineralogical relationships are diagnostic of their distinct parent bodies:

In addition, both Fe- and Zn-isotope compositions are fractionated to different degrees between EL and EH chondrites; EL chondrites are isotopically heavier than EH chondrites, indicating EL chondrites experienced higher volatilization due to its formation closer to the SunOur parent star. The structure of Sun's interior is the result of the hydrostatic equilibrium between gravity and the pressure of the gas. The interior consists of three shells: the core, radiative region, and convective region. Image source: http://eclipse99.nasa.gov/pages/SunActiv.html. The core is the hot, dense central region in which the (Mullane et al., 2005), or alternatively, due to elemental fractionationConcentration or separation of one mineral, element, or isotope from an initially homogeneous system. Fractionation can occur as a mass-dependent or mass-independent process. during impact-shock events (Rubin et al., 2009). Studies into the origins of EL chondrites conducted by Goresy et al. (2012) determined that petrologic evidence, including the occurrence within FeNi-metal nodules of repeated sinoite–graphiteOpaque form of carbon (C) found in some iron and ordinary chondrites and in ureilite meteorites. Each C atom is bonded to three others in a plane composed of fused hexagonal rings, just like those in aromatic hydrocarbons. The two known forms of graphite, α (hexagonal) and β (rhombohedral), have condensation events associated with oldhamiteMn-Ca sulfide, (Mn,Ca)S, is a pale to dark brown accessory mineral found in minor amounts in highly reduced meteorites such as many enstatite chondrites, and some aubrites and enstatite achondrites. Oldhamite in enstatite chondrites likely formed by solar nebular gas condensation. CaS Oldhamite was also found in the most fresh (CaS) in the sequence CaS ⇒ sinoite ⇒ graphite, was indicative of a nebular condensateIn the solar nebula, product of a chemical condensation reaction where a mineral phase precipitates (condenses) directly from a cooling vapor. origin for these chondrites rather than their formation as an impact-melt brecciaWork in Progress ... A rock that is a mechanical mixture of different minerals and/or rock fragments (clasts). A breccia may also be distinguished by the origin of its clasts: (monomict breccia: monogenetic or monolithologic, and polymict breccia: polygenetic or polylithologic). The proportions of these fragments within the unbrecciated material of preexisting proto-asteroids. Still, later incidences of impact-shock for EL chondrites are attested by the higher prevalence of impact-melt breccias among the more metamorphosed members, as well as by the occurrence of sinoite crystallized from a melt.

Other comparisons demonstrate that EH group chondrites have smaller average chondrule diameters (220 µm vs. 550 µm; Rubin et al., 2000) and smaller average metal diameters than EL-group members as shown in the table below: The disparity in the size and Na content of chondrulesRoughly spherical aggregate of coarse crystals formed from the rapid cooling and solidification of a melt at  ~1400 ° C. Large numbers of chondrules are found in all chondrites except for the CI group of carbonaceous chondrites. Chondrules are typically 0.5-2 mm in diameter and are usually composed of olivine within the EH and EL groups can be reconciled by several possible scenarios, including the one proposed by Schneider et al., 2002: Chondrules from both groups were formed from similar precursor material in the same nebular region. During accretionAccumulation of smaller objects into progressively larger bodies in the solar nebula leading to the eventual formation of asteroids, planetesimals and planets. The earliest accretion of the smallest particles was due to Van der Waals and electromagnetic forces. Further accretion continued by relatively low-velocity collisions of smaller bodies in the, the chondrules underwent a size sorting process induced by volatile flows within the regolithMixture of unconsolidated rocky fragments, soil, dust and other fine granular particles blanketing the surface of a body lacking an atmosphere. Regolith is the product of "gardening" by repeated meteorite impacts, and thermal processes (such as repeated heating and cooling cycles).  , or alternatively, by the abundance of dust in the prospective accretion regions and by the number of chondrule remelting episodes (Rubin, 2010). Photophoresis, utilizing pressure and particle-size dependence, was also a likely size sorting mechanism of chondrules (Hesse et al.,2011). This resulted in the larger EL chondrules becoming more deeply buried than the smaller EH chondrules on their respective parent bodies. It has been reported that EL3 chondrites usually exhibit a preferred orientation of chondrules and other constituents. The deep burial conditions would support such a foliation as the result of continued impact deformation processes. After burial, lithification of the chondrules into bulk rock was quickly achieved. The shallower EH material experienced more rapid cooling, and thus retained more of its volatile component such as Na, while volatiles were lost during a more extended cooling period in the more deeply buried EL material. In an attempt to model the precursor material of Earth, it was calculated that approximately 55% of the precursor component could have been of EL chondrite composition, which is the meteoritic material that provides the best match to the Earth in O-isotope composition, bulk Fe/Al weight ratio, and bulk FeO concentration (T. Burbine and K. O’Brien, 2004). However, it was not possible to model the Earth’s precursor based solely on known chondrites. Alternatively, the Earth could have been formed from chondritic material that subsequently underwent differentiationA process by which a generally homogeneous chondritic body containing mostly metal, silicates and sulfides will melt and form distinct (differentiated) layers of different densities.   When the melting process continues for a long enough period of time, the once chondritic body will re-partition into layers of different composition including and loss of a basaltic component, or that had a significant Si component sequestered into the coreIn the context of planetary formation, the core is the central region of a large differentiated asteroid, planet or moon and made up of denser materials than the surrounding mantle and crust. For example, the cores of the Earth, the terrestrial planets and differentiated asteroids are rich in metallic iron-nickel. or lower mantleMain silicate-rich zone within a planet between the crust and metallic core. The mantle accounts for 82% of Earth's volume and is composed of silicate minerals rich in Mg. The temperature of the mantle can be as high as 3,700 °C. Heat generated in the core causes convection currents in. Based on isotopic studies, the meteorites of the EL3 group, as opposed to the EL6 group, are thought to be the best candidates for the building blocks of Earth (Boyet et al., 2018). Further information on the classification and petrogenesis of the E chondrites can be found on the Saint-Sauveur page. The specimen of NWA 3132 shown above is a 0.8 g partial slice. The photo below shows the main massLargest fragment of a meteorite, typically at the time of recovery. Meteorites are commonly cut, sliced or sometimes broken thus reducing the size of the main mass and the resulting largest specimen is called the "largest known mass".. 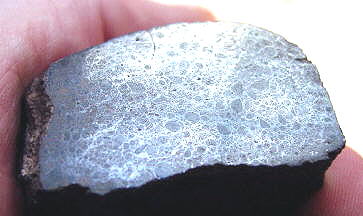