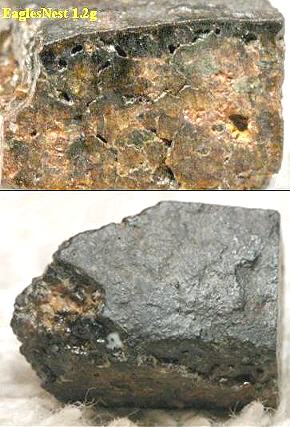 Found Summer of 1960
no coordinates recorded A well-oriented, fusion-crusted meteoriteWork in progress. A solid natural object reaching a planet’s surface from interplanetary space. Solid portion of a meteoroid that survives its fall to Earth, or some other body. Meteorites are classified as stony meteorites, iron meteorites, and stony-iron meteorites. These groups are further divided according to their mineralogy and weighing 154 g was found in Central Australia lying next to an eagle’s nest. Although the type specimen Brachina was found in central South Australia, differences between it and Eagles Nest in mineralogy, chemistry, and average grain size indicate that they are not fall-related. Analysis and classification of Eagles Nest was conducted at the University of Arizona, Lunar and Planetary Laboratory (W. V. Boynton), and a classification of brachinite was proposed. Eagles Nest shows some differences to most brachinites including its lack of fine-grained assemblages of orthopyroxeneOrthorhombic, low-Ca pyroxene common in chondrites. Its compositional range runs from all Mg-rich enstatite, MgSiO3 to Fe-rich ferrosilite, FeSiO3. These end-members form an almost complete solid solution where Mg2+ substitutes for Fe2+ up to about 90 mol. % and Ca substitutes no more than ~5 mol. % (higher Ca2+ contents occur and opaques lining various olivineGroup of silicate minerals, (Mg,Fe)2SiO4, with the compositional endpoints of forsterite (Mg2SiO4) and fayalite (Fe2SiO4). Olivine is commonly found in all chondrites within both the matrix and chondrules, achondrites including most primitive achondrites and some evolved achondrites, in pallasites as large yellow-green crystals (brown when terrestrialized), in the silicate portion grain boundaries. Goodrich (2010) described reductionOxidation and reduction together are called redox (reduction and oxidation) and generally characterized by the transfer of electrons between chemical species, like molecules, atoms or ions, where one species undergoes oxidation, a loss of electrons,  while another species undergoes reduction, a gain of electrons. This transfer of electrons between reactants features that exist on such assemblages in some brachinites, but which are absent in Eagles Nest. It was conjectured that Eagles Nest might have originated from a different brachinite-like parent bodyThe body from which a meteorite or meteoroid was derived prior to its ejection. Some parent bodies were destroyed early in the formation of our Solar System, while others like the asteroid 4-Vesta and Mars are still observable today..

click on image for a magnified view Diagram credit: Beard et al., 81st MetSoc, #6170 (2018) It has been argued that GRA 06128/9 possibly represents a lower crustal cumulateIgneous rock composed of crystals that have grown and accumulated (often by gravitational settling) in a cooling magma chamber. developed after 10–30% partial meltingAn igneous process whereby rocks melt and the resulting magma is comprised of the remaining partially melted rock (sometimes called restite) and a liquid whose composition differs from the original rock. Partial melting occurs because nearly all rocks are made up of different minerals, each of which has a different melting of a chondritic source on the brachinite parent body. An estimated cooling rate of 10–20°C/year was derived (University of Tokyo; Miyamoto), consistent with a near-surface burial at a depth of 15–20 m. This is contrasted with the deep, ultramaficTerm used for silicate minerals with cations predominantly Mg and/or Fe. Mafic minerals are dominated by plagioclase and pyroxene, and also contain smaller amounts of olivine. mantleMain silicate-rich zone within a planet between the crust and metallic core. The mantle accounts for 82% of Earth's volume and is composed of silicate minerals rich in Mg. The temperature of the mantle can be as high as 3,700 °C. Heat generated in the core causes convection currents in region from which typical brachinites are thought to have formed as residues of partial melting (Ash et al., 2008). It can be inferred from petrological, geochemical, and mineralogical data that GRA 06128/9, and thus all brachinites, originated on a large partially differentiated planetary body distinct from the Earth, Moon, or Mars; interestingly, speculation has surfaced about a possible origin on Venus (Shearer et al., 2008). Nevertheless, in light of its isotopic, chemical, and mineralogical similarities to IAB complex irons such as Caddo County, which similarly contains inclusions of albitic plagioclase (Ab84 mol%), it was considered plausible that this iron asteroid could be the parental source of the brachinites (Nyquist et al., 2009). However, a comparison between brachinites and IAB irons utilizing nucleosynthetic isotopeOne of two or more atoms with the same atomic number (Z), but different mass (A). For example, hydrogen has three isotopes: 1H, 2H (deuterium), and 3H (tritium). Different isotopes of a given element have different numbers of neutrons in the nucleus. anomalies (Mo systematics) shows them to be unrelated.