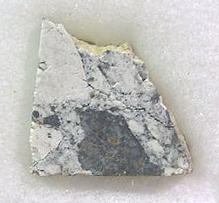 Fell April 9, 1919
36° 50′ N., 84° 21′ W. Several stones fell in Whitley County, Kentucky at noon after the appearance of a fireballA fireball is another term for a very bright meteor, generally brighter than magnitude -4, which is about the same magnitude of the planet Venus as seen in the morning or evening sky. A bolide is a special type of fireball which explodes in a bright terminal flash at its end, often with visible fragmentation. and sonic booms. The largest fragment recovered was estimated to weigh 31 pounds. As with most aubritesAubrites are named for the Aubres meteorite that fell in 1836 near Nyons, France. They are an evolved achondrite that is Ca-poor and composed mainly of enstatite (En100) and diopside (En50Wo50) with minor amounts of olivine (Fa0) and traces of plagioclase (An2-8).  They contain large white crystals of enstatite as, Cumberland Falls is a polymict brecciaGeneral term for all breccias that are neither monomict nor dimict. Modified from image source: http://www.saharamet.com/meteorite/gallery/HED/index.html. composed of chalky-white enstatiteA mineral that is composed of Mg-rich pyroxene, MgSiO3. It is the magnesium endmember of the pyroxene silicate mineral series - enstatite (MgSiO3) to ferrosilite (FeSiO3). fragments, along with accessory metalElement that readily forms cations and has metallic bonds; sometimes said to be similar to a cation in a cloud of electrons. The metals are one of the three groups of elements as distinguished by their ionization and bonding properties, along with the metalloids and nonmetals. A diagonal line drawn, iron sulfide, and graphiteOpaque form of carbon (C) found in some iron and ordinary chondrites and in ureilite meteorites. Each C atom is bonded to three others in a plane composed of fused hexagonal rings, just like those in aromatic hydrocarbons. The two known forms of graphite, α (hexagonal) and β (rhombohedral), have. Siderophile elementLiterally, "iron-loving" element that tends to be concentrated in Fe-Ni metal rather than in silicate; these are Fe, Co, Ni, Mo, Re, Au, and PGE. These elements are relatively common in undifferentiated meteorites, and, in differentiated asteroids and planets, are found in the metal-rich cores and, consequently, extremely rare on patterns in Cumberland Falls metal provide evidence of a fractionationConcentration or separation of one mineral, element, or isotope from an initially homogeneous system. Fractionation can occur as a mass-dependent or mass-independent process. process. This process has been characterized as occurring either through quenching of an impact-produced metallic melt, or through crystallizationPhysical or chemical process or action that results in the formation of regularly-shaped, -sized, and -patterned solid forms known as crystals. within a magmaMolten silicate (rock) beneath the surface of a planetary body or moon. When it reaches the surface, magma is called lava. chamber (van Acken et al., 2010).

Diagram credit: Pourkhorsandi et al., GCA, vol. 218, p. 109 (2017)
‘The ungrouped chondrite El Médano 301 and its comparison with other reducedOxidation and reduction together are called redox (reduction and oxidation) and generally characterized by the transfer of electrons between chemical species, like molecules, atoms or ions, where one species undergoes oxidation, a loss of electrons,  while another species undergoes reduction, a gain of electrons. This transfer of electrons between reactants ordinary chondrites’
(https://doi.org/10.1016/j.gca.2017.09.013) The pre-atmospheric diameter of Cumberland Falls, as calculated from cosmogenic production rates, was 160–200 cm—quite large by aubrite standards. Just as all aubrites exhibit complex irradiation histories, both on the parent body and in space, Cumberland Falls presents a cosmic-ray exposure ageTime interval that a meteoroid was an independent body in space. In other words, the time between when a meteoroid was broken off its parent body and its arrival on Earth as a meteorite - also known simply as the "exposure age." It can be estimated from the observed effects range of 49 (±10) m.y., based on 81Kr–Kr, to 60.9 m.y. This CRE age is consistent with a possible cluster that might include Pesynoe (~40 m.y.), (Bishopville (52 ±3 m.y.), Bustee (52.6 m.y.), Khor Temiki (53.9 m.y.), Y-793592 (55.0 m.y.), and LEW 87007 (58.5 m.y.), while Pena Blanca Spring (75 ±11 m.y.) and LAP 02233 (78 ±12 m.y.) are only slightly higher. However, since pre-irradiation within the regolith of the parent body likely accounts for a component of these exposure ages, doubts are raised concerning the likelihood of their common ejection (Lorenzetti et al., 2003). It has been suggested that a minimum of four, and as many as nine breakup events occurred on the aubrite parent body. In light of their higher than average neutron-capture-produced noble gas components, Cumberland Falls and Bishopville are considered to have resided near the surface of the aubrite parent body. For additional information on the formation of the aubrite group visit the Mayo Belwa page. The photo above shows a 1.22 g partial slice sectioned through a black chondritic inclusionFragment of foreign (xeno-) material enclosed within the primary matrix of a rock or meteorite.. The top photo below shows a closeup view of a chondritic inclusion in a large mass curated at the National Museum of Natural History, Smithsonian Institution. The bottom photo is an excellent petrographic thin sectionThin slice or rock, usually 30 µm thick. Thin sections are used to study rocks with a petrographic microscope. micrograph of Cumberland Falls, shown courtesy of Peter Marmet.