Iron, IIIE, octahedriteMost Common type of iron meteorite, composed mainly of taenite and kamacite and named for the octahedral (eight-sided) shape of the kamacite crystals. When sliced, polished and etched with an acid such as nitric acid, they display a characteristic Widmanstätten pattern. Spaces between larger kamacite and taenite plates are often 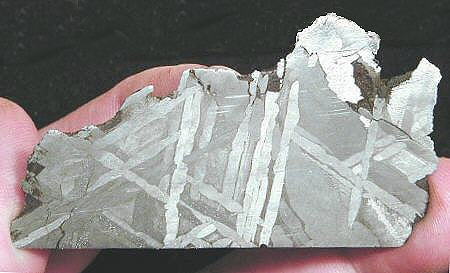 Found 1860
36° 26′ N., 87° 0′ W. A single wedge-shaped iron meteoriteMeteorite composed mainly of iron (Fe) and nickel (Ni) in the form of two alloys, kamacite and taenite. Due to their metallic makeup and extraordinary weight, iron meteorites are easily distinguished from ordinary rocks. Also, because they rarely break up in the air and suffer much less from the effects weighing 16.8 kg was found by Mr. D. Crockett near Coopertown, Tennessee, and was sent to a professor for analysis (Buchwald, 1975). The fusion crustMelted exterior of a meteorite that forms when it passes through Earth’s atmosphere. Friction with the air will raise a meteorite’s surface temperature upwards of  4800 K (8180 °F) and will melt (ablate) the surface minerals and flow backwards over the surface as shown in the Lafayette meteorite photograph below. and heat-affected zone have been completely removed by terrestrial corrosion leaving an oxidizedOxidation and reduction together are called redox (reduction and oxidation) and generally characterized by the transfer of electrons between chemical species, like molecules, atoms or ions, where one species undergoes oxidation, a loss of electrons,  while another species undergoes reduction, a gain of electrons. This transfer of electrons between reactants crustOutermost layer of a differentiated planet, asteroid or moon, usually consisting of silicate rock and extending no more than 10s of km from the surface. The term is also applied to icy bodies, in which case it is composed of ices, frozen gases, and accumulated meteoritic material. On Earth, the, while the interior is still well preserved.

Etched sections of Coopertown exhibit a coarse Thomson (Widmansttätten) structure composed of short, swollen kamaciteMore common than taenite, both taenite and kamacite are Ni-Fe alloys found in iron meteorites. Kamacite, α-(Fe,Ni), contains 4-7.5 wt% Ni, and forms large body-centered cubic crystals that appear like broad bands or beam-like structures on the etched surface of a meteorite; its name is derived from the Greek word lamellae having a bandwidth of 1.5 mm, 10–20% wider than would be expected based on its chemical composition (Buchwald, 1975). The Ni content is 8.47%, with P occurring throughout as schreibersiteNi-Fe phosphide mineral, (Fe,Ni)3P, yellowish in color and predominantly found in iron and stony-iron meteorites. Schreibersite can also be found in a variety of other meteorites including some acapulcoites, aubrites, enstatite chondrites and achondrites, lunars, ureilites, winonaites and a smattering of other meteorite types like CM, CO and CB. Schreibersite grains and rhabdites. PlessiteA fine-grained intergrowth of kamacite and taenite that fills in the wedges between wide kamacite and taenite bands in octahedrites. The name derives from the Greek word for "filling." fields constitute about 30% of the area and contain aggregates of the the very hard, white-colored carbide haxoniteIron-nickel carbide, (Fe,Ni)23C6, found in iron meteorites.; haxonite has been partially or fully decomposed to graphiteOpaque form of carbon (C) found in some iron and ordinary chondrites and in ureilite meteorites. Each C atom is bonded to three others in a plane composed of fused hexagonal rings, just like those in aromatic hydrocarbons. The two known forms of graphite, α (hexagonal) and β (rhombohedral), have in those IIIE irons with more intense impact shock histories (Breen et al., 2015). Inclusions of troiliteBrass colored non-magnetic mineral of iron sulfide, FeS, found in a variety of meteorites. occur sparsely throughout, while hard, needle-shaped inclusions of the nitride carlsbergite are distributed in the matrixFine grained primary and silicate-rich material in chondrites that surrounds chondrules, refractory inclusions (like CAIs), breccia clasts and other constituents.. Resolution of this magmatic group from the similar IIIAB group is based on several factors including the swollen kamacite lamellae, the abundance of inclusions of carbide haxonite, the presence of carlsbergite normally associated with lower Ni levels, the unique Ga,Ge/Ni and Ga,Co/Au plots compared to other IIIAB members, and the cosmic-ray exposure ageTime interval that a meteoroid was an independent body in space. In other words, the time between when a meteoroid was broken off its parent body and its arrival on Earth as a meteorite - also known simply as the "exposure age." It can be estimated from the observed effects. However, strong similarities between these two iron groups, including N, C, and particularly Cu isotopic compositions (Bishop et al., 2012), indicate a genetic relationship exists between them indicating accretionAccumulation of smaller objects into progressively larger bodies in the solar nebula leading to the eventual formation of asteroids, planetesimals and planets. The earliest accretion of the smallest particles was due to Van der Waals and electromagnetic forces. Further accretion continued by relatively low-velocity collisions of smaller bodies in the in close proximity to each other in the early solar nebulaThe primitive gas and dust cloud around the Sun from which planetary materials formed.. Only fifteen iron meteorites have been classified to date as members of the IIIE group. Breen et al. (2015) initially assigned each of these irons to five separate categories based on degree of shock—weak, moderate, intermediate, strong, and severe, corresponding to the proximity of each meteoriteWork in progress. A solid natural object reaching a planet’s surface from interplanetary space. Solid portion of a meteoroid that survives its fall to Earth, or some other body. Meteorites are classified as stony meteorites, iron meteorites, and stony-iron meteorites. These groups are further divided according to their mineralogy and from the point of impact. In a subsequent study involving all of the IIIE irons except two which have been artificially heated (Burlington and Paneth ’s Iron), Breen et al. (2016) distinguished only four shock categories—weak, moderate, strong, and severe—based on improved textural and compositional (sulfide, metalElement that readily forms cations and has metallic bonds; sometimes said to be similar to a cation in a cloud of electrons. The metals are one of the three groups of elements as distinguished by their ionization and bonding properties, along with the metalloids and nonmetals. A diagonal line drawn, and C-rich phases) parameters; Coopertown is assigned to the weakly shocked category. The photo above shows a 42.9 g etched partial slice of Coopertown.