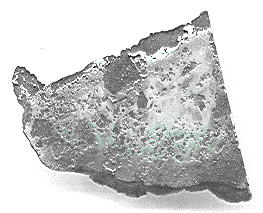 Fell spring 1927
7° 57′ N., 8° 5′ E. A 103 kg mass was seen and heard to fallMeteorite seen to fall. Such meteorites are usually collected soon after falling and are not affected by terrestrial weathering (Weathering = 0). Beginning in 2014 (date needs confirmation), the NomComm adopted the use of the terms "probable fall" and "confirmed fall" to provide better insight into the meteorite's history. If in the daytime near the Benue River in Nigeria. The Geological Survey of Nigeria learned of the event in 1935 when the mass was recovered from a shallow hole six miles west of the railway station at Udei and 23 miles north of Makurdi. Some reports state that a second mass exists.

Diagram credit: Hunt et al., EPSL, vol. 482, pp. 497 (2018, open access link)
‘Late metal–silicate separation on the IAB parent asteroid: Constraints from combined W and Pt isotopes and thermal modelling’
(https://doi.org/10.1016/j.epsl.2017.11.034)’ Dey et al. (2019) employed 17O and ε54Cr values for several irons and their associated silicates/oxides to investigate i) if each iron and its associated phases originated on a common parent body (i.e., an endogenous mixture of core and mantleMain silicate-rich zone within a planet between the crust and metallic core. The mantle accounts for 82% of Earth's volume and is composed of silicate minerals rich in Mg. The temperature of the mantle can be as high as 3,700 °C. Heat generated in the core causes convection currents in vs. an exogenous mixture through impact), and ii) if any genetic connection exists between the irons and other meteoriteWork in progress. A solid natural object reaching a planet’s surface from interplanetary space. Solid portion of a meteoroid that survives its fall to Earth, or some other body. Meteorites are classified as stony meteorites, iron meteorites, and stony-iron meteorites. These groups are further divided according to their mineralogy and groups (e.g., IAB with winonaites, IIE with H chondritesChondrites are the most common meteorites accounting for ~84% of falls. Chondrites are comprised mostly of Fe- and Mg-bearing silicate minerals (found in both chondrules and fine grained matrix), reduced Fe/Ni metal (found in various states like large blebs, small grains and/or even chondrule rims), and various refractory inclusions (such, and Eagle Station pallasites with CK chondrites). Three IAB irons were employed in the study, and it was demonstrated on a coupled diagram that although the ε54Cr values for the iron component plot in the winonaitea partially differentiated asteroid that was disrupted just as it began to form an Fe core and a silicate-rich crust. This disrupting impact mixed silicates into molten Ni-Fe metal forming the silicated IAB irons, and mixed olivine-rich residues of partial melts into unmelted silicates, forming the winonaites. A few winonaites field, values for the silicate component plot in a distinct region on an O–Cr coupled diagram (see diagram below). From these results they ascertained that the the IAB silicated irons formed through an impact-generated mixture comprising iron from a winonaite-related parent body and silicate from an unrelated and otherwise unsampled parent body. Incorporation of the silicates into the FeNi-metal host took place at a depth greater than 2 km, allowing time for a Thomson (Widmanstätten) structure to develop during a long cooling phase. Fractional crystallizationA crystallization process in which minerals crystallizing from a magma are isolated from contact with the liquid. It is a key process in the formation of igneous rocks during the process of magmatic differentiation. Also known as crystal fractionation. occurred in some large molten metal pools, followed by very slow cooling, to produce the broad range of features found in certain IAB meteorites (e.g., silicate-poor, graphite–troilite-rich inclusions and extremely high Ni contents). Other results from their study can be found on the Miles and Eagle Station pages. 17O vs. ε54Cr for Irons and Pallasites

click on photo for a magnified view Diagrams credit: Dey et al., 50th LPSC, #2977 (2019)
Udei Station has a Cl–Ar-based CRE age of 123 m.y. (Albrecht et al., 2000). It plots as an anomalous member of group IAB in several regards. It contains a clastA mineral or rock fragment embedded in another rock. best described as a peridotite, composed of the most Fe-rich maficOne of the two broad categories of silicate minerals, the other being felsic, based on its magnesium (Mg) and/or iron (Fe) content. Mafic indicates silicate minerals that are predominantly comprised of Mg and/or Fe.The term is derived from those major constituents: Magnesium + Ferrum (Latin for iron) + ic (having minerals found among IAB irons. Some variability in appearance is apparent in some members of this grouplet, as can be seen in the Four Corners meteorite. The specimen shown above is a 26.3 g partial slice exhibiting a high content of silicates.