Martian ShergottiteIgneous stony meteorite with a Martian origin consisting mainly of plagioclase (or a shocked glass of plagioclase composition) and pyroxene. They are the most abundant type of SNC meteorites and the type member is the Shergotty meteorite, which fell in India in 1865. Shergottites are igneous rocks of volcanic or
augite-rich ∗
(depleted, maficOne of the two broad categories of silicate minerals, the other being felsic, based on its magnesium (Mg) and/or iron (Fe) content. Mafic indicates silicate minerals that are predominantly comprised of Mg and/or Fe.The term is derived from those major constituents: Magnesium + Ferrum (Latin for iron) + ic (having) 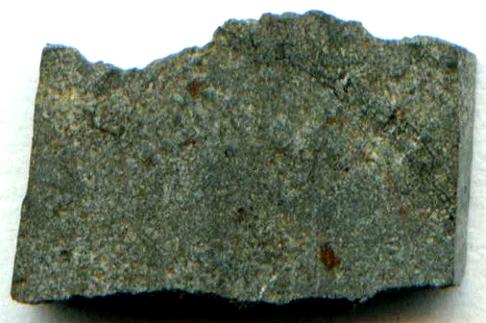 Found 2013
no coordinates recorded At the 2013 Denver Gem and MineralInorganic substance that is (1) naturally occurring (but does not have a biologic or man-made origin) and formed by physical (not biological) forces with a (2) defined chemical composition of limited variation, has a (3) distinctive set of of physical properties including being a solid, and has a (4) homogeneous Show, meteoriteWork in progress. A solid natural object reaching a planet’s surface from interplanetary space. Solid portion of a meteoroid that survives its fall to Earth, or some other body. Meteorites are classified as stony meteorites, iron meteorites, and stony-iron meteorites. These groups are further divided according to their mineralogy and dealer Blaine Reed was asked by a fellow meteorite dealer (S. Tutorow) to sort through a box of at least a hundred ‘likely terrestrial’ rocks remaining in a bulk shipment sent from a Moroccan dealer (B. Tahiri). During his examination he noticed a small 149.4 g stone with visible shock veins and thought it was probably a eucriteMost common type of achondrite meteorite and a member of the HED group. Eucrites are basalts composed primarily of pigeonite and anorthite (An60-98). Eucrites have been placed into three subgroups based on mineralogical and chemical differences. • Non-cumulate eucrites represent the upper crust that solidified on a magma ocean after; however, an XRF probe on a cut face indicated that the meteorite was possibly martian. The owner subsequently brought this stone to the University of New Mexico (C. Agee) for analysis and classification, and NWA 8159 was determined to be a new martian type—augite-rich basaltBasalt is the most common extrusive igneous rock on the terrestrial planets. For example, more than 90% of all volcanic rock on Earth is basalt. The term basalt is applied to most low viscosity dark silicate lavas, regardless of composition. Basalt is a mafic, extrusive and fine grained igneous rock. For his part in recovering this rare meteorite, Mr. Reed was kindly given a 2.2 g section.

mouseover the time machine set to 230 t.y. before present For additional information on the crystallization and ejection age of NWA 7635 and similar shergottites, read the PSRD article by G. Jeffrey Taylor: ‘Two Billion Years of Magmatism in One Place on Mars‘, May 2017. Further evidence supporting a unique martian source region for NWA 8159 was presented by Kayzar et al. (2015) through a coupled Nd–W diagram, and by Herd et al. (2015) through a coupled O–Cr diagram; these clearly demonstrate that NWA 8159 is resolved from other martian mantle reservoirs (see below). 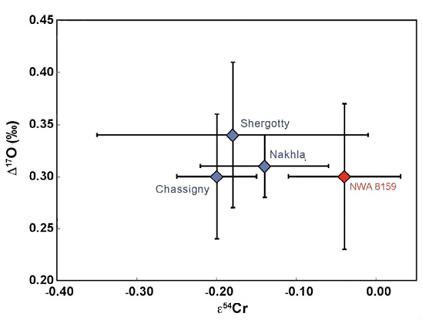 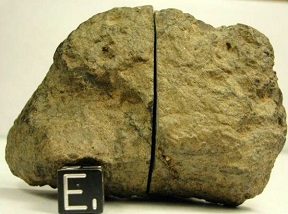