Over 30 of the meteorites found on Earth almost certainly came from Mars (see http://www.imca.cc/mars/martian-meteorites.htm and http://www2.jpl.nasa.gov/snc/). All but one belongs to the group known as SNC meteorites, which includes the shergottitesIgneous stony meteorite with a Martian origin consisting mainly of plagioclase (or a shocked glass of plagioclase composition) and pyroxene. They are the most abundant type of SNC meteorites and the type member is the Shergotty meteorite, which fell in India in 1865. Shergottites are igneous rocks of volcanic or, nakhlites, and chassignitesThe group is part of the SNC martian trio and named after the meteorite seen to fall in Chassigny, France, in 1815. Its subsequent recovery led to it being one of the first meteorites to be recognized as a genuine rock from space. Chassigny resembles a terrestrial dunite - a. SNC meteorites contain minerals that crystallized within the past 1.35 to 0.15 Ga, making them much younger than any other known achondrites. The one oddball is an orthopyroxeniteA rock composed primarily of orthopyroxene. Non-terrestrial orthopyoxenites include diogenites and a single martian meteorite, ALH 84001, that was found in the Allan Hills region of Antarctica in 1984. ALH 84001 is a cumulate rock consisting of 97% coarse-grained, Mg-rich orthopyroxene, with small amounts of plagioclase, chromite, and carbonate. It. Trapped gases within several SNC meteorites exactly match the composition of the Martian atmosphere as measured by the Viking landers, confirming its place of origin. 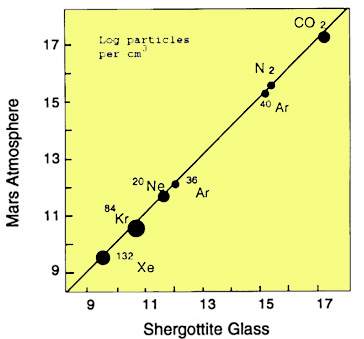 Oddly, the orthopyroxenite, ALH 84001, became the center of controversy in 1996 when a group of NASA scientists claimed it contained fossil bacteria. It represents a deeper part of Mars, and has a much older crystallizationPhysical or chemical process or action that results in the formation of regularly-shaped, -sized, and -patterned solid forms known as crystals. age of 4 Ga. The Lafayette meteoriteWork in progress. A solid natural object reaching a planet’s surface from interplanetary space. Solid portion of a meteoroid that survives its fall to Earth, or some other body. Meteorites are classified as stony meteorites, iron meteorites, and stony-iron meteorites. These groups are further divided according to their mineralogy and, a nakhliteOne of the Martian SNC meteorites, nakhlites are basaltic cumulate clinopyroxenite rocks, and most all are comprised mainly of sub-calcic augite with approximately 10% Fe-rich olivine (giving the augite a green color) that are set in a very fine-grained matrix (mesostasis) comprised of plagioclase, K-feldspar, clinopyroxene, Fe-Ti oxide (Ti-magnetite), sulfide,, contains the highest percentage of water of all Martian rocks.