Lunar MareBroad low plains surrounded by basin-forming mountains, originally thought to be a sea (pl. maria). This term is applied to the basalt-filled impact basins common on the face of the Moon visible from Earth.   BasaltBasalt is the most common extrusive igneous rock on the terrestrial planets. For example, more than 90% of all volcanic rock on Earth is basalt. The term basalt is applied to most low viscosity dark silicate lavas, regardless of composition. Basalt is a mafic, extrusive and fine grained igneous rock
unbrecciated, low-Ti 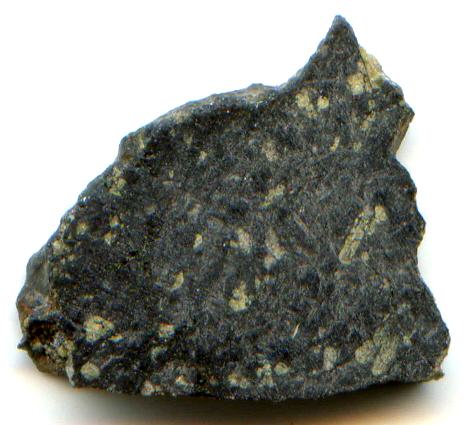 Found October 1999
near 30° 22′ N., 5° 3′ W. A small 300 g stone was found by an association of European collectors at a location west of the Kem Kem plateau in Morocco. A second stone weighing 156 g and designated NWA 479 was recovered a year later. It is both chemically and petrographically indistinguishable from NWA 032, and the two stones are obviously paired. Northwest Africa 032 is a previously-unsampled, unbrecciated, interior mare basalt that was not exposed to solar windSupersonic flow of high-speed charged particles continuously blowing off a star (mostly e- and p+). When originating from stars other than the Sun, it is sometimes called a "stellar" wind. The solar wind may be viewed as an extension of the corona into interplanetary space. The solar wind emanates radially implanted gases.

Photo by Walt Radomsky
Courtesy of R. A. Langheinrich Meteorites 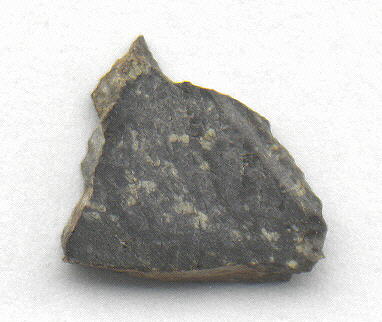 For more information on the lunar basalt NWA 032, read the PSRD article by G. Jeffrey Taylor—’The Growing Diversity of Lunar Basalts’, Sept. 2009, from this link. In addition, extensive information can be found on the lunar meteorite website of the Department of Earth Sciences, Washington University. Additional details about the linkage of NWA 032, NWA 4734, and the LAP pairing group mare basalts can be found on the NWA 4734 page.