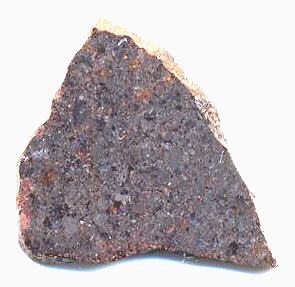 Purchased August 2004
no coordinates recorded Twelve individual fragments constituting a single meteoriteWork in progress. A solid natural object reaching a planet’s surface from interplanetary space. Solid portion of a meteoroid that survives its fall to Earth, or some other body. Meteorites are classified as stony meteorites, iron meteorites, and stony-iron meteorites. These groups are further divided according to their mineralogy and, with a combined total weight of 392 g, were visually distinguished by Greg Hupé from an assortment of meteorites he had purchased in Morocco. Samples from different stones were sent for analysis to Northern Arizona University (T. Bunch and J. Wittke) and the University of Washington in Seattle (A. Irving and S. Kuehner). A preliminary analysis found similarities to known angrites, and a sample was sent to the Carnegie Institute, Washington D.C. (D. Rumble III) for O-isotopic analysis. By this method it was verified that these meteorites were in fact a new sampling of the angriteType of evolved achondrite meteorite that represent some of the earliest stages of asteroidal differentiation and magmatism in our solar system. Angrites are named for the Angra dos Reis meteorite, which fell in Rio de Janeiro, Brazil, in early 1869. They are basaltic (mafic) rocks, often containing porous areas, and parent bodyThe body from which a meteorite or meteoroid was derived prior to its ejection. Some parent bodies were destroyed early in the formation of our Solar System, while others like the asteroid 4-Vesta and Mars are still observable today.. Because of the importance and uniqueness of this findMeteorite not seen to fall, but recovered at some later date. For example, many finds from Antarctica fell 10,000 to 700,000 years ago., a sample from each of the twelve fragments was submitted for analysis. Numerous other pairings have been independently analyzed and given separate NWA series numbers, with the total combined weight of this pairing group being ~7.8 kg.

Diagram credit: Nakashima et al., MAPS, vol. 53, #5, p. 965 (2018)
‘Noble gasesElement occurring in the right-most column of the periodic table; also called "inert" gases. In these gases, the outer electron shell is completely filled, making them very unreactive. in angrites Northwest Africa 1296, 2999/4931, 4590, and 4801: Evolution history inferred from noble gas signatures’
(http://dx.doi.org/10.1111/maps.13039) Taken together, all of the anomalous characteristics observed for the NWA 2999 pairing group could be attributed to contamination through exotic impact event(s), or as speculated by some, it could be that the NWA 2999 pairing group might even represent a unique parent body with similar O-isotopic values to those measured for the angrite PB. The specimen of NWA 2999 shown above is a 0.228 g partial slice. The photo below is an excellent petrographic thin sectionThin slice or rock, usually 30 µm thick. Thin sections are used to study rocks with a petrographic microscope. micrograph of the pairing NWA 6291, shown courtesy of Peter Marmet.