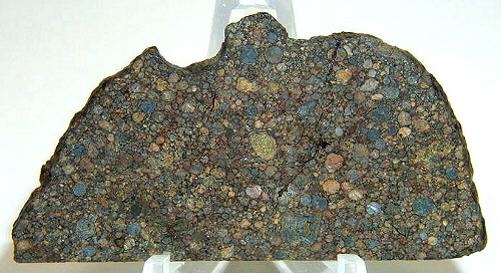 Purchased October 2007
no coordinates recorded A single weathered (W3) meteoriteWork in progress. A solid natural object reaching a planet’s surface from interplanetary space. Solid portion of a meteoroid that survives its fall to Earth, or some other body. Meteorites are classified as stony meteorites, iron meteorites, and stony-iron meteorites. These groups are further divided according to their mineralogy and Click on Term to Read More weighing 1,276 g was found in Algeria and sold to a meteorite dealer in Erfoud, Morocco. Analysis and classification of the stone was conducted at Northern Arizona University (T. Bunch and J. Wittke), and it was determined that NWA 5206 is a very weakly shocked (S2), terrestrially weathered (W3), highly unequilibrated LL3.05 (or possibly lower) chondriteChondrites are the most common meteorites accounting for ~84% of falls. Chondrites are comprised mostly of Fe- and Mg-bearing silicate minerals (found in both chondrules and fine grained matrix), reduced Fe/Ni metal (found in various states like large blebs, small grains and/or even chondrule rims), and various refractory inclusions (such Click on Term to Read More. 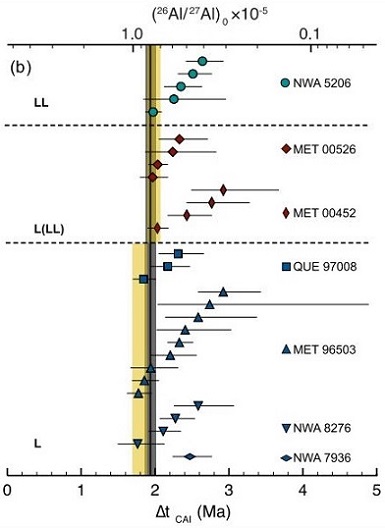 Diagram credit: Pape et al., GCA, vol. 244, p. 429 (2019)
‘Time and duration of chondrule formation: Constraints from 26Al-26Mg ages of individual chondrules’
(https://doi.org/10.1016/j.gca.2018.10.017) Very few ordinary chondrites have been classified as petrologic subtype 3.05 or lower, and NWA 5206 is the only LL chondriteOrdinary chondrites ("low Fe" / "low metal") with only 1 to 3% free metal. Their olivine is more Fe-rich than in the other ordinary chondrites (Fa27-32), implying that the LL types must have formed under more oxidizing conditions than their H or L cousins. Orthopyroxene compositions are also Fe-the rich Click on Term to Read More designated as such. A comprehensive pictorial review of NWA 5206 can be found on the Meteorites Australia page showing examples of the many chondrule types and exotic components such as metallic chondrules armored with troiliteBrass colored non-magnetic Fe sulfide, FeS, found in a variety of meteorites., xenolithic chondrule fields, and dark inclusions. The specimen of NWA 5206 shown above is a 7.47 g partial slice. The photo below shows a view of the main massLargest fragment of a meteorite, typically at the time of recovery. Meteorites are commonly cut, sliced or sometimes broken thus reducing the size of the main mass and the resulting largest specimen is called the "largest known mass". Click on Term to Read More, courtesy of M. Cimala. 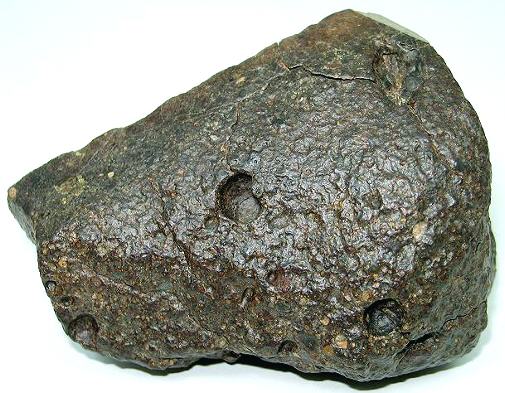