EL3/6, impact-melt brecciaWork in Progress ... A rock that is a mechanical mixture of different minerals and/or rock fragments (clasts). A breccia may also be distinguished by the origin of its clasts: (monomict breccia: monogenetic or monolithologic, and polymict breccia: polygenetic or polylithologic). The proportions of these fragments within the unbrecciated material
‘Fossil’ or ‘Paleo’ MeteoriteWork in progress. A solid natural object reaching a planet’s surface from interplanetary space. Solid portion of a meteoroid that survives its fall to Earth, or some other body. Meteorites are classified as stony meteorites, iron meteorites, and stony-iron meteorites. These groups are further divided according to their mineralogy and
(EL6/7 in MetBull 91; aubriteAubrites are named for the Aubres meteorite that fell in 1836 near Nyons, France. They are an evolved achondrite that is Ca-poor and composed mainly of enstatite (En100) and diopside (En50Wo50) with minor amounts of olivine (Fa0) and traces of plagioclase (An2-8).  They contain large white crystals of enstatite as pairing in MetBull 92)
Revised classifications have been submitted to NomCom and MetBull 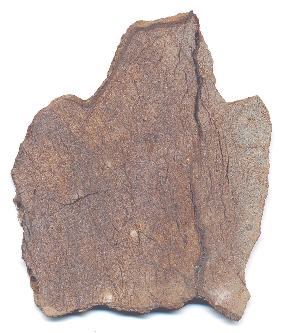 click on photo for an enlarged view Purchased August 2005
27° 30′ N., 12° 30′ W. Numerous individual pieces of an extensively weathered ‘relict’* or fossil meteoriteThe textural, mineralogical or compositional remnant within a sedimentary rock of a meteorite that fell millions of years ago and found in Ordovician limestone from Sweden. Read Tiny Traces of a Big Asteroid Breakup for a complete writeup on this subject. In picture to the left a nautiloid shell is, weighing together as much as 3,000 kg, were found in Western Sahara, reportedly near the village of Al Haggounia. Stones of various sizes were found both on top of the surface and buried under the soil in geological strataOriginally horizontal layers of rock. associated with both quaternary limestones and cretaceous limestones. This is evidence that the fallMeteorite seen to fall. Such meteorites are usually collected soon after falling and are not affected by terrestrial weathering (Weathering = 0). Beginning in 2014 (date needs confirmation), the NomComm adopted the use of the terms "probable fall" and "confirmed fall" to provide better insight into the meteorite's history. If occurred later than the deposition of these strata (Chennaoui et al., 2007). The 14C age of this meteorite was determined by Chennaoui–Aoudjehane et al. (2009) to be 23 (±2) t.y., in agreement with geological evidence. 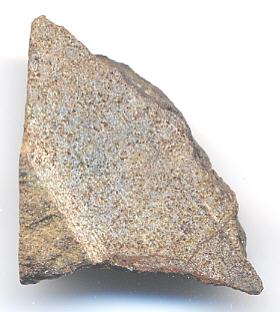