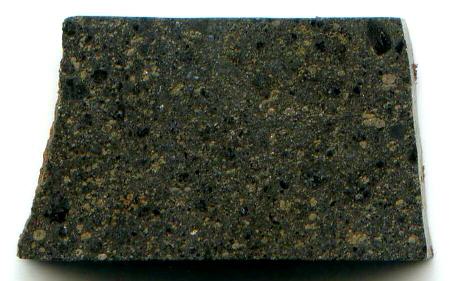 Fell April 7, 1891
39° 45′ N., 46° 40′ E. At 8:10 P.M., people in Azerbaydzhan, SSR, USSR, witnessed a fireballA fireball is another term for a very bright meteor, generally brighter than magnitude -4, which is about the same magnitude of the planet Venus as seen in the morning or evening sky. A bolide is a special type of fireball which explodes in a bright terminal flash at its end, often with visible fragmentation. accompanied by detonations. The next morning, a single 27 kg stone was recovered. Indarch has experienced minimal impact alteration, exhibiting weak shock metamorphismMetamorphism produced by hypervelocity impact between objects of substantial size moving at cosmic velocity (at least several kilometers per second). Kinetic energy is converted into seismic and heat energy almost instantaneously, yielding pressures and temperatures far in excess those in normal terrestrial metamorphism. On planetary bodies with no atmosphere, smaller (S3) at shock pressures of 5–10 GPa. This produced planar fractures in olivineGroup of silicate minerals, (Mg,Fe)2SiO4, with the compositional endpoints of forsterite (Mg2SiO4) and fayalite (Fe2SiO4). Olivine is commonly found in all chondrites within both the matrix and chondrules, achondrites including most primitive achondrites and some evolved achondrites, in pallasites as large yellow-green crystals (brown when terrestrialized), in the silicate portion and twinned clinoenstatite, along with metallic shock veins.

A few other E chondrites with intermediate mineralogy have also been identified, including LAP 031220 (EH4), QUE 94204 (EH7), Y-793225 (E-an), LEW 87223 (E-an), and PCA 91020 (possibly related to LEW 87223). Studies have determined that these meteorites were not derived from the EH or EL source through any metamorphic processes, and some or all of them could represent separate E chondrite asteroids. The revised E chondrite classification scheme of Weyrauch et al. (2018) including selected examples from their 80-sample study can be found here. It was determined that Indarch is a member of the EHa subgroup.