LL3.10, metal-poor
(possible ungroupedModifying term used to describe meteorites that are mineralogically and/or chemically unique and defy classification into the group or sub-group they most closely resemble. Some examples include Ungrouped Achondrite (achondrite-ung), Ungrouped Chondrite (chondrite-ung), Ungrouped Iron (iron-ung), and Ungrouped Carbonaceous (C-ung). ordinary chondriteWork in Progress Ordinary chondrites (OCs) are the largest meteorite clan, comprising approximately 87% of the global collection and 78% of all falls (Meteoritical Society database 2018)1. Meteorites & the Early Solar System: page 581 section 6.1 OC of type 5 or 6 with an apparent shock stage of S1,) 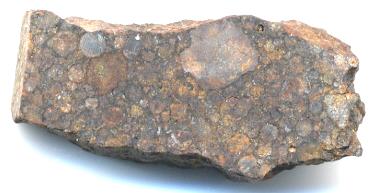 Purchased October 2002
no coordinates recorded A single stone weighing 487 g was found in the Sahara Desert and sold to A. and G. Hupé in Safsaf, Morocco in October 2002. This meteoriteWork in progress. A solid natural object reaching a planet’s surface from interplanetary space. Solid portion of a meteoroid that survives its fall to Earth, or some other body. Meteorites are classified as stony meteorites, iron meteorites, and stony-iron meteorites. These groups are further divided according to their mineralogy and is very weakly shocked to stage S2 and heavily weathered to grade W3. Through analyses conducted at Northern Arizona University (T. Bunch and J. Wittke) and the U.S. Geological Survey in Reston, Virginia (J. Grossman), it was determined that NWA 3127 is a polymict chondriteChondrites are the most common meteorites accounting for ~84% of falls. Chondrites are comprised mostly of Fe- and Mg-bearing silicate minerals (found in both chondrules and fine grained matrix), reduced Fe/Ni metal (found in various states like large blebs, small grains and/or even chondrule rims), and various refractory inclusions (such consisting of an LL3.1 host with LL4 and LL5 xenoliths.

Studies of the compositional, textural, and other petrographic features of chondrulesRoughly spherical aggregate of coarse crystals formed from the rapid cooling and solidification of a melt at  ~1400 ° C. Large numbers of chondrules are found in all chondrites except for the CI group of carbonaceous chondrites. Chondrules are typically 0.5-2 mm in diameter and are usually composed of olivine in NWA 3127 revealed that it had close similarities to those of the LL3.0 Semarkona and the LL3.1 NWA 1756 chondritesChondrites are the most common meteorites accounting for ~84% of falls. Chondrites are comprised mostly of Fe- and Mg-bearing silicate minerals (found in both chondrules and fine grained matrix), reduced Fe/Ni metal (found in various states like large blebs, small grains and/or even chondrule rims), and various refractory inclusions (such. As a sensitive indicator of petrologic subtype (Grossman, 2004; Grossman and Bearley, 2005), the olivineGroup of silicate minerals, (Mg,Fe)2SiO4, with the compositional endpoints of forsterite (Mg2SiO4) and fayalite (Fe2SiO4). Olivine is commonly found in all chondrites within both the matrix and chondrules, achondrites including most primitive achondrites and some evolved achondrites, in pallasites as large yellow-green crystals (brown when terrestrialized), in the silicate portion chromiteBrownish-black oxide of chromium and iron (Cr-Fe oxide), Cr2FeO4, found in many meteorite groups. contents of NWA 3127 were measured and found to have values (ave. 0.38 wt%) consistent with an LL3.10 classification. After further analyses conducted by Grossman and Brearley (2007), a reclassification was made for NWA 3127 providing a refined subtype of LL3.10. Northwest Africa 3127 has a very low metalElement that readily forms cations and has metallic bonds; sometimes said to be similar to a cation in a cloud of electrons. The metals are one of the three groups of elements as distinguished by their ionization and bonding properties, along with the metalloids and nonmetals. A diagonal line drawn abundance, which was found to be a primary feature rather than an effect of terrestrial weathering. After the publication of NWA 3127 in MetBull 89 as an LL3.1 chondrite, Rumble III et al. (2007) conducted a survey of the O-isotopic composition of this meteorite and several other metal-poor, ungrouped chondrites in the NWA-series: 960 [ung], 2040 [LL], 2041 [L], 3114 [L], 3127 [LL], 3157 [L], 4294 [LL], 4298 [LL], 4486 [L], and 4531 [LL]. It is demonstrated in the oxygenElement that makes up 20.95 vol. % of the Earth's atmosphere at ground level, 89 wt. % of seawater and 46.6 wt. % (94 vol. %) of Earth's crust. It appears to be the third most abundant element in the universe (after H and He), but has an abundance only three-isotope diagram below that these meteorites plot far away from the trend lines for the H, L, and LL ordinary chondrite groups, and they probably represent several previously unrecognized parent asteroids (Irving et al., 2014, #5332). See further details about this ‘supra-TFL’ grouping of meteorites on the HaH 180 page. 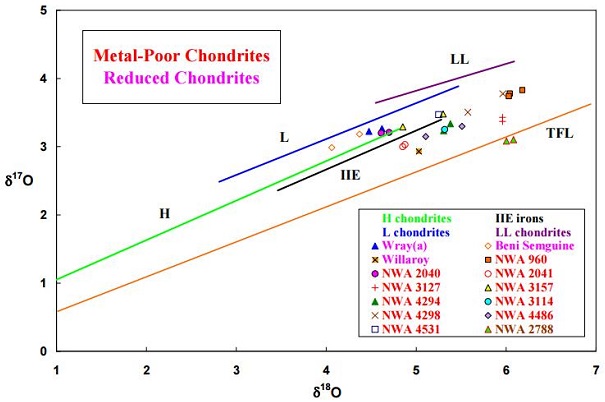