Iron with silicateThe most abundant group of minerals in Earth's crust, the structure of silicates are dominated by the silica tetrahedron, SiO44-, with metal ions occurring between tetrahedra). The mesodesmic bonds of the silicon tetrahedron allow extensive polymerization and silicates are classified according to the amount of linking that occurs between the inclusions, ungroupedModifying term used to describe meteorites that are mineralogically and/or chemically unique and defy classification into the group or sub-group they most closely resemble. Some examples include Ungrouped Achondrite (achondrite-ung), Ungrouped Chondrite (chondrite-ung), Ungrouped Iron (iron-ung), and Ungrouped Carbonaceous (C-ung).
(CO–CV clan related)

Found 1999
no coordinates recorded A rare Saharan iron meteoriteMeteorite composed mainly of iron (Fe) and nickel (Ni) in the form of two alloys, kamacite and taenite. Due to their metallic makeup and extraordinary weight, iron meteorites are easily distinguished from ordinary rocks. Also, because they rarely break up in the air and suffer much less from the effects weighing 2 kg was found near the border of Morocco and Algeria. The mass was obtained by G. Cintron of Island Meteorites, and a portion was sent for study to several institutions, including the Hawaii Institute of Geophysics & Planetology, the Institute of Geophysics and Planetary Physics in Los Angeles, the Enrico Fermi Institute in Chicago, the Universitat Bern in Switzerland, and Washington University in St. Louis. This meteoriteWork in progress. A solid natural object reaching a planet’s surface from interplanetary space. Solid portion of a meteoroid that survives its fall to Earth, or some other body. Meteorites are classified as stony meteorites, iron meteorites, and stony-iron meteorites. These groups are further divided according to their mineralogy and contains sub-mm- to cm-sized, rounded, greenish-yellow, silicate inclusions dispersed throughout the metalElement that readily forms cations and has metallic bonds; sometimes said to be similar to a cation in a cloud of electrons. The metals are one of the three groups of elements as distinguished by their ionization and bonding properties, along with the metalloids and nonmetals. A diagonal line drawn host constituting ~44 vol%. Some of the silicates are aligned along shear planes that were probably created during an impact event.

Northwest Africa 176 is nearly identical to the meteorite Bocaiuva in elemental abundances, oxygenElement that makes up 20.95 vol. % of the Earth's atmosphere at ground level, 89 wt. % of seawater and 46.6 wt. % (94 vol. %) of Earth's crust. It appears to be the third most abundant element in the universe (after H and He), but has an abundance only isotopeOne of two or more atoms with the same atomic number (Z), but different mass (A). For example, hydrogen has three isotopes: 1H, 2H (deuterium), and 3H (tritium). Different isotopes of a given element have different numbers of neutrons in the nucleus. composition, and petrographic features, and both were likely derived from the same parent body—an asteroid with a composition similar to the CO–CV clan. Although the O-isotopic composition for both NWA 176 (Δ17O = –5.2‰) and Bocaiuva is similar to that of the IAB iron complex, they are clearly resolved from that group both by their significantly lower AuThe astronomical unit for length is described as the "mean" distance (average of aphelion and perihelion distances) between the Earth and the Sun. Though most references state the value for 1 AU to be approximately 150 million kilometers, the currently accepted precise value for the AU is 149,597,870.66 km. The and As values (Wasson, 2011) and Mo isotope systematics (Budde et al., 2016). This O-isotopic value is also similar to the pallasites of the Eagle Station grouplet (see top diagram below), but the Ge and Ga contents are higher in these silicated irons which suggests an origin from similar chondritic material in the same region of the protoplanetary diskFlattened and rotating disk of dense gas and dust/solids orbiting a young star from which planets can eventually form.  . Notably, utilizing a coupled Δ17O vs. ε54Cr diagram (see bottom diagram below), Sanborn et al. (2018) have demonstrated that Eagle Station plots closer to the CK (or CO) chondriteChondrites are the most common meteorites accounting for ~84% of falls. Chondrites are comprised mostly of Fe- and Mg-bearing silicate minerals (found in both chondrules and fine grained matrix), reduced Fe/Ni metal (found in various states like large blebs, small grains and/or even chondrule rims), and various refractory inclusions (such group. It could be inferred that both the CV and CK planetesimalsHypothetical solid celestial body that accumulated during the last stages of accretion. These bodies, from ~1-100 km in size, formed in the early solar system by accretion of dust (rock) and ice (if present) in the central plane of the solar nebula. Most planetesimals accreted to planets, but many – experienced a similar petrogenetic history in a similar isotopic reservoir of the nascent Solar SystemThe Sun and set of objects orbiting around it including planets and their moons and rings, asteroids, comets, and meteoroids.. 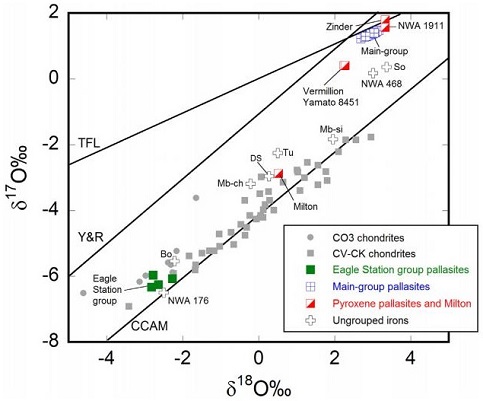 click on diagram for a magnified view Diagram credit: Sanborn et al., 49th LPSC, #1780 (2018) Northwest Africa 176 and Bocaiuva, along with the Eagle Station group pallasites, are resolved from the main-group pallasites and the major iron groups by their higher Ge/Ga ratios, higher Cu and Ir contents, and lower Au, As, and Sb contents. For those few irons that do have Ge/Ga ratios similar to NWA 176, in particular, the irons of group IIF and certain ungrouped irons such as the silicated iron Mbosi, their elemental abundance ratios rule against a genetic relationship with NWA 176 and its relatives. Nevertheless, it is likely they all originated from similar chondritic precursor material in the carbonaceous reservoir beyond Jupiter. A multi-stage formation history is proposed for NWA 176 in which an initial impact generated enough heat (~1100°C) to form a melt pool. This was followed by gravitational differentiation that was sustained above ~500°C for a significant time. Differentiation resulted in a lower metallic layer with a cumulateIgneous rock composed of crystals that have grown and accumulated (often by gravitational settling) in a cooling magma chamber. silicate layer above. A subsequent impact event shattered the silicate layer and mobilized metal forcing it into existing cracks in the silicate layer, while initiating a rapid cooling phase at a rate of 1000°C/m.y. This cooling data would be consistent with a small body of only a few km in radius, or possibly reflects the breakup phase of a much larger object. Extended annealing at depth led to the rounding of the corners on silicate grains, a thermodynamic process acting to minimize the surface energy. Several factors support this origin rather than the core–mantleMain silicate-rich zone within a planet between the crust and metallic core. The mantle accounts for 82% of Earth's volume and is composed of silicate minerals rich in Mg. The temperature of the mantle can be as high as 3,700 °C. Heat generated in the core causes convection currents in interface origin commonly envisioned for the main-group pallasites. The nearly chondritic silicate composition with its relatively low proportion of olivineGroup of silicate minerals, (Mg,Fe)2SiO4, with the compositional endpoints of forsterite (Mg2SiO4) and fayalite (Fe2SiO4). Olivine is commonly found in all chondrites within both the matrix and chondrules, achondrites including most primitive achondrites and some evolved achondrites, in pallasites as large yellow-green crystals (brown when terrestrialized), in the silicate portion is more consistent with an impact-melt model than for a core–mantle interface origin. Moreover, the heat-generating radiogenic isotopes present in the later-forming carbonaceous chondriteCarbonaceous chondrites represent the most primitive rock samples of our solar system. This rare (less than 5% of all meteorite falls) class of meteorites are a time capsule from the earliest days in the formation of our solar system. They are divided into the following compositional groups that, other than parent bodies would be insufficient to produce melts that could form pallasitic compositions. Furthermore, the shear forces that produced the deformation features, as well as the loss of alkali volatiles, can be reconciled through impact mixing processes. Finally, the low Ir content of NWA 176 and its relatives is not consistent with fractional crystallizationA crystallization process in which minerals crystallizing from a magma are isolated from contact with the liquid. It is a key process in the formation of igneous rocks during the process of magmatic differentiation. Also known as crystal fractionation. processes necessary for a core–mantle origin. One possible alternative origin proposed for this meteorite is that the precursor was a metal-rich, highly metamorphosed, chondritic asteroid. Further details about possible origins of NWA 176 can be found on the Allende page. Northwest Africa 176 has an absolute I–Xe age, calculated relative to Shallowater (4.5623 [±0.0004] b.y.), of ~4.544 (±0.007) b.y., indicating a relatively late formation, probably through impact processes (Bogard and Garrison, 2009). The meteorite has a remarkably high Ar–Ar age of 4.524 (±0.013) b.y. The CRE age of 41 (±12) m.y. calculated for NWA 176 is low compared to other iron meteorites. A portion of the information above was gleaned from the paper ‘Bocaiuva—A Silicate-Inclusion Bearing Iron Meteorite Related To The Eagle-Station Pallasites’ (Malvin, Wasson, Clayton, Mayeda, & Curvello), MeteoriticsScience involved in the study of meteorites and related materials. Meteoritics are closely connected to cosmochemistry, mineralogy and geochemistry. A scientist that specializes in meteoritics is called a meteoriticist., vol. 20, #2, Part 1 (1985). The specimen of NWA 176 pictured above is an 8.07 g partial slice displaying rounded silicate inclusions. It’s fresh dark fusion crustMelted exterior of a meteorite that forms when it passes through Earth’s atmosphere. Friction with the air will raise a meteorite’s surface temperature upwards of  4800 K (8180 °F) and will melt (ablate) the surface minerals and flow backwards over the surface as shown in the Lafayette meteorite photograph below. attests to a recent arrival.