Massive stars at an advanced stage of stellar evolutionChanges in a stars luminosity and temperature over its lifetime; conventionally, plotted on an Hertzsprung-Russell (HR) diagram. All stars, irrespective of their mass spend most of their lifetime on the main sequence. The more massive a star, the more luminous and hotter it is. As all stars age, they enter, losing mass at a very high rate (right). They have masses typically >25 Msun and brief lifetimes. About 220 are known in our own GalaxyConcentration of 106 to 1012 stars, dust and gas, that are gravitationally bound. Our galaxy contains ~2 × 1011 stars. There are four main types of galaxies: • Elliptical
• Lenticular
• Spiral
• Irregular
out of an estimated 1,000-2,000 such objects; most are hidden by dust. Wolf-rayet stars have average temperatures >25,000 K and luminosities up to 106 Lsun. Powerful stellar winds driven by intense radiation pressureMinute pressure exerted by electromagnetic radiation (such as but not limited to light from the sun) on everything it encounters. This can be thought of as the transfer of momentum from photons as they strike the surface of the object. In the environs of stars such pressure can become important, eject ~10 Msun per million years at speeds up to 3,000 km/s. These speeds result in broad emission lines in the spectra. 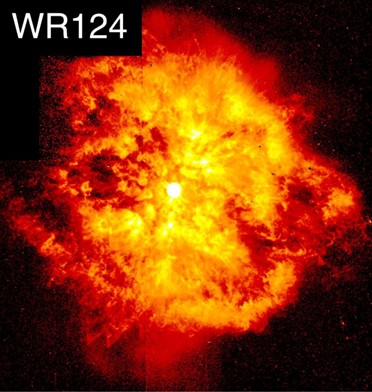 These stars probably descend from O stars that have lost their H envelopes, revealing a He coreIn the context of planetary formation, the core is the central region of a large differentiated asteroid, planet or moon and made up of denser materials than the surrounding mantle and crust. For example, the cores of the Earth, the terrestrial planets and differentiated asteroids are rich in metallic iron-nickel.. They may be subclassified into 2 main types: WN stars dominated by He and N  and nitrogenPrincipal constituent of the Earth’s atmosphere (78.08 vol. % at ground level). Nitrogen is the fifth most abundant element in the universe by atom abundance. Nitrogen comprises only 3.5 vol. % of the atmosphere of Venus and 2.7 vol. % of Mars’s atmosphere. Nitrogen has two isotopes: 14N (99.632 %) and 15N emission lines, but containing some C, and  WC stars lacking N and dominated by He, C, and O emission lines. About 50% of Wolf-Rayet stars occur in binary systems; proposed companions include another Wolf-Rayet starSelf-luminous object held together by its own self-gravity. Often refers to those objects which generate energy from nuclear reactions occurring at their cores, but may also be applied to stellar remnants such as neutron stars., or a black holeMaximally gravitationally collapsed object predicted to exist by the theory of general relativity, from which no material object, light or signal of any kind can escape. Many black holes form when a high mass supergiant star explodes in a supernova explosion at the end of its life. A star probably or neutron starDense ball of neutrons that remains at the core of a star after a supernova explosion has destroyed the rest of a star with mass 8-18 (?) Msun. A neutron star has mass ~2-3 Msun, density ~1014 g/cm3, and is supported by neutron degeneracy pressure. Typical neutron stars are 10-20. The only confirmed Wolf-Rayet companions so identified are other massive stars. Wolf-Rayet stars probably end their lives as either Type Ib or Type Ic supernovae.