PyroxeneA class of silicate (SiO3) minerals that form a solid solution between iron and magnesium and can contain up to 50% calcium. Pyroxenes are important rock forming minerals and critical to understanding igneous processes. For more detailed information, please read the Pyroxene Group article found in the Meteoritics & Classification category. PallasiteOne of two main classes of stony-iron meteorite, the other being mesosiderites. Pallasites are igneous in nature and characterized by crystals of olivine, sometimes peridot (green gem quality clear olivine crystals), embedded in a matrix of Fe-Ni metal. The type specimen, weighing 680 kg, was found in the mountains near
Vermillion grouplet 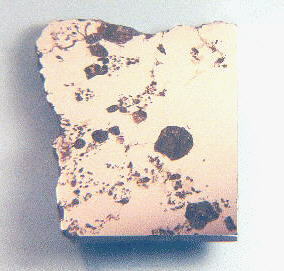 Found May, 1991, recognized 1995
39° 44.18′ N., 96° 21.68′ W. A 34.36 kg mass was found by M. and G. Farrell while planting in a grain field in Marshall County, Kansas, in the vicinity of the Black Vermillion River. This was purchased by a dealer with the belief that it was a Brenham mass. Upon cutting, it was discovered to be unique from Brenham. Vermillion consists of ~86 vol% FeNi-metal and ~14 vol% silicates with grains much smaller than normal (Boesenberg et al., 1995). The silicates consist of olivineGroup of silicate minerals, (Mg,Fe)2SiO4, with the compositional endpoints of forsterite (Mg2SiO4) and fayalite (Fe2SiO4). Olivine is commonly found in all chondrites within both the matrix and chondrules, achondrites including most primitive achondrites and some evolved achondrites, in pallasites as large yellow-green crystals (brown when terrestrialized), in the silicate portion (~93 vol%), orthopyroxeneOrthorhombic, low-Ca pyroxene common in chondrites. Its compositional range runs from all Mg-rich enstatite, MgSiO3 to Fe-rich ferrosilite, FeSiO3. These end-members form an almost complete solid solution where Mg2+ substitutes for Fe2+ up to about 90 mol. % and Ca substitutes no more than ~5 mol. % (higher Ca2+ contents occur (~5 vol%), chromiteBrownish-black oxide of chromium and iron (Cr-Fe oxide), Cr2FeO4, found in many meteorite groups. (~1.5 vol%), and merrillite (~0.5 vol%). Vermillion was compared to the pallasite Yamato 8451 (54.9 g) which has a very similar silicateThe most abundant group of minerals in Earth's crust, the structure of silicates are dominated by the silica tetrahedron, SiO44-, with metal ions occurring between tetrahedra). The mesodesmic bonds of the silicon tetrahedron allow extensive polymerization and silicates are classified according to the amount of linking that occurs between the composition consisting of olivine (~94 vol%), orthopyroxene (~4.8 vol%), clinopyroxene (~1.1 vol%), and merrillite (~0.1 vol%) reported by Yanai and Kojima (1995). Pyroxene accounts for ~0.7 and ~1.6 vol% of the silicate fraction of Vermillion and Y-8451 respectively, the remainder being mostly olivine. By comparison, the main-group pallasites contain all olivine with only trace amounts of pyroxene. The coexistence of both olivine and pyroxene in these two pallasites might indicate a lower crystallizationPhysical or chemical process or action that results in the formation of regularly-shaped, -sized, and -patterned solid forms known as crystals. temperature. In light of the compositional and isotopic similarities between Vermillion and Y-8451, Boesenberg et al. (1995) proposed they be recognized as a grouplet.

Subsequent studies have determined that Vermillion shares a similar pyroxene composition, mineralogy, O-isotope composition, and REEOften abbreviated as “REE”, these 16 elements include (preceded by their atomic numbers): 21 scandium (Sc), 39 Yttrium (Y) and the 14 elements that comprise the lanthanides excluding 61 Promethium, an extremely rare and radioactive element. These elements show closely related geochemical behaviors associated with their filled 4f atomic orbital. pattern not only with Yamato 8451, but also with the more recently discovered pyroxene pallasite Choteau (8,474 g), and it was proposed by Gregory et al. (2016) that these three pyroxene pallasites be recognized as members of a new pyroxene-pallasite grouplet termed ‘Vermillion pallasites’. 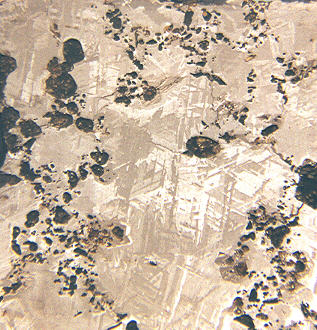