Winonaitea partially differentiated asteroid that was disrupted just as it began to form an Fe core and a silicate-rich crust. This disrupting impact mixed silicates into molten Ni-Fe metal forming the silicated IAB irons, and mixed olivine-rich residues of partial melts into unmelted silicates, forming the winonaites. A few winonaites (evolved)*
(ungroupedModifying term used to describe meteorites that are mineralogically and/or chemically unique and defy classification into the group or sub-group they most closely resemble. Some examples include Ungrouped Achondrite (achondrite-ung), Ungrouped Chondrite (chondrite-ung), Ungrouped Iron (iron-ung), and Ungrouped Carbonaceous (C-ung). achondriteAn achondrite is a type of stony meteorite whose precursor was of chondritic origin and experienced metamorphic and igneous processes. They have a planetary or differentiated asteroidal origin where the chondritic parent body reached a sufficient size that through heating due to radioactive decay of 26Al (aluminum isotope) and gravitational in MetBull 91) 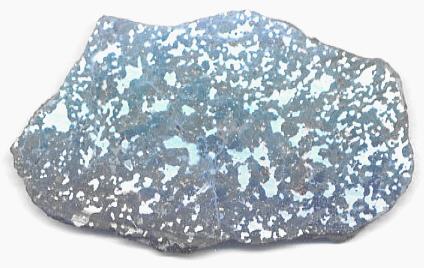 Found June 2006
no coordinates recorded A fresh, fusion-crusted, 625 g stone was found in the Algerian desert in June of 2006; shortly thereafter it was purchased by a collector (A. Aaronson) in Erfoud, Morocco, and a portion of the meteoriteWork in progress. A solid natural object reaching a planet’s surface from interplanetary space. Solid portion of a meteoroid that survives its fall to Earth, or some other body. Meteorites are classified as stony meteorites, iron meteorites, and stony-iron meteorites. These groups are further divided according to their mineralogy and was submitted for analysis and classification to Northern Arizona University (T. Bunch and J. Wittke) and the University of Washington in Seattle (A. Irving). The meteorite was subsequently sold to another collector (S. Turecki). The section of NWA 2993 under analysis was found to consist of 37 vol% orthopyroxeneOrthorhombic, low-Ca pyroxene common in chondrites. Its compositional range runs from all Mg-rich enstatite, MgSiO3 to Fe-rich ferrosilite, FeSiO3. These end-members form an almost complete solid solution where Mg2+ substitutes for Fe2+ up to about 90 mol. % and Ca substitutes no more than ~5 mol. % (higher Ca2+ contents occur, 32 vol% olivineGroup of silicate minerals, (Mg,Fe)2SiO4, with the compositional endpoints of forsterite (Mg2SiO4) and fayalite (Fe2SiO4). Olivine is commonly found in all chondrites within both the matrix and chondrules, achondrites including most primitive achondrites and some evolved achondrites, in pallasites as large yellow-green crystals (brown when terrestrialized), in the silicate portion, and 30 vol% FeNi-metal (kamacite-rimmed taeniteLess common than kamacite, both taenite and kamacite are Ni-Fe alloys found in iron meteorites. Taenite, γ-(Fe,Ni), has 27-65 wt% Ni, and forms small crystals that appear as highly reflecting thin ribbons on the etched surface of a meteorite; the name derives from the Greek word for "ribbon." with occasional plessiteA fine-grained intergrowth of kamacite and taenite that fills in the wedges between wide kamacite and taenite bands in octahedrites. The name derives from the Greek word for "filling." cores), along with minor sulfide.

While a preliminary petrographic examination of a cut face revealed the texture and composition of a coarse-grained (0.3–3.4 mm), plagioclase-depleted, metal-rich lodraniteRare type of primitive achondrite named after the Lodran meteorite that fell in Pakistan in 1868. Initially, lodranites were grouped with the stony-iron meteorites because they contain silicates (olivine, orthopyroxene, and minor plagioclase) and Fe-Ni metal in nearly equal proportions. However, since discovery of the closely related acapulcoite group, lodranites, subsequent O-isotopic analyses conducted at Carnegie Institute (D. Rumble, III) showed that it actually plots on an extension of the trend line for the winonaite/IAB-iron complex meteorites; it is also notable that NWA 2993 plots very close to the pyroxeneA class of silicate (SiO3) minerals that form a solid solution between iron and magnesium and can contain up to 50% calcium. Pyroxenes are important rock forming minerals and critical to understanding igneous processes. For more detailed information, please read the Pyroxene Group article found in the Meteoritics & Classification category. pallasiteOne of two main classes of stony-iron meteorite, the other being mesosiderites. Pallasites are igneous in nature and characterized by crystals of olivine, sometimes peridot (green gem quality clear olivine crystals), embedded in a matrix of Fe-Ni metal. The type specimen, weighing 680 kg, was found in the mountains near Vermillion (see Figure 3 in the 38th LPSC abstract #2211 [2007]). To help discriminate between the winonaite and acapulcoite–lodranite groups, a plot of Δ17O (‰) with olivine Fa content (mol%) was found to be a useful technique (Rumble III et al., 2005). Northwest Africa 2993 plots nearest to the winonaite field, but since it has the largest values for both parameters, it plots in a unique location along an extension of the winonaite trend line slightly distant from the main winonaite concentration (see diagrams below).

A similar distinction could be made among the winonaites in our collections, although there is not yet an analog of the IAB complex irons for the acapulcoite/lodranite PB. Northwest Africa 1463 (and pairing group) ranks as the most primitive member of the winonaites, containing intact chondrulesRoughly spherical aggregate of coarse crystals formed from the rapid cooling and solidification of a melt at  ~1400 ° C. Large numbers of chondrules are found in all chondrites except for the CI group of carbonaceous chondrites. Chondrules are typically 0.5-2 mm in diameter and are usually composed of olivine comparable to a petrologic typeMeasure of the degree of aqueous alteration (Types 1 and 2) and thermal metamorphism (Types 3-6) experienced by a chondritic meteorite. Type 3 chondrites are further subdivided into 3.0 through 3.9 subtypes. 5 chondriteChondrites are the most common meteorites accounting for ~84% of falls. Chondrites are comprised mostly of Fe- and Mg-bearing silicate minerals (found in both chondrules and fine grained matrix), reduced Fe/Ni metal (found in various states like large blebs, small grains and/or even chondrule rims), and various refractory inclusions (such (Benedix et al., 2003). However, most winonaites experienced extensive thermal metamorphism involving incipient sulfide melting and exhibit highly recrystallized textures, characteristics analogous to the ‘typical’ acapulcoites. Metamorphic progression in other winonaites led to partial loss of the low-melting phases FeS and plagioclase, and these are designated as a ‘transitional’ stage in the acapulcoite/lodranite metamorphic continuum. Those winonaites which experienced the highest temperatures ultimately crystallized from residual melt material, and they exhibit significant depletions in FeS, FeNi-metal, and plagioclase (including plagiophile trace elements). Samples representing this advanced metamorphic stage are known as lodranites in the acapulcoite/lodranite metamorphic sequence, while the term ‘evolved’ could be used to represent a similar metamorphic stage in the winonaite group (e.g., Tierra Blanca; Hunt et al., 2017). Northwest Africa 2993 represents the first known coarse-grained, plutonicGeology: Igneous intrusive body that forms when magma is injected into host rocks and solidifies. Plutons occur in the crust of asteroids undergoing differentiation or planets. Named after Pluto, the Roman god of the underworld. Plutonic rocks are the rocks found within a pluton. Astronomy: Category of planet including all sampling from the winonaite/IAB-iron complex parent bodyThe body from which a meteorite or meteoroid was derived prior to its ejection. Some parent bodies were destroyed early in the formation of our Solar System, while others like the asteroid 4-Vesta and Mars are still observable today., and is chemically and texturally analogous to the lodranites of the ACA–LOD parent body. Determination of the exact petrogenetic history which led to the formation of this unique meteorite is ongoing, and further details about the winonaite group can be found on the Tierra Blanca page. The photo of NWA 2993 shown above is a 8.93 g slice, while that below is a view of the main massLargest fragment of a meteorite, typically at the time of recovery. Meteorites are commonly cut, sliced or sometimes broken thus reducing the size of the main mass and the resulting largest specimen is called the "largest known mass". in the possession of the owner. 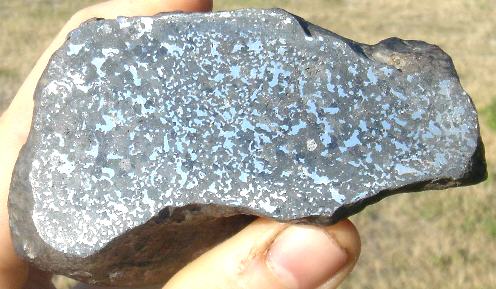