Primitive AchondriteAchondrite with an almost chondritic composition with age similar to the primordial chondrites. These should be better classified as "metachondrites"., ungroupedModifying term used to describe meteorites that are mineralogically and/or chemically unique and defy classification into the group or sub-group they most closely resemble. Some examples include Ungrouped Achondrite (achondrite-ung), Ungrouped Chondrite (chondrite-ung), Ungrouped Iron (iron-ung), and Ungrouped Carbonaceous (C-ung).
(Brachinite-like; Brachinite in MetBull 86) 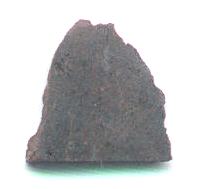 Purchased November 9, 2000
no coordinates recorded A small, highly weathered (W3/4), but complete stone, weighing 196 g was purchased in M’hamid, Morocco and given the name Northwest Africa 595. Northwest Africa 595 is an olivine-rich primitive achondriteAn achondrite is a type of stony meteorite whose precursor was of chondritic origin and experienced metamorphic and igneous processes. They have a planetary or differentiated asteroidal origin where the chondritic parent body reached a sufficient size that through heating due to radioactive decay of 26Al (aluminum isotope) and gravitational with subchondritic chemistry and mineralogy, and despite some anomalous features like more magnesian silicates, has been grouped by some investigators with the brachinites. Its matrixFine grained primary and silicate-rich material in chondrites that surrounds chondrules, refractory inclusions (like CAIs), breccia clasts and other constituents. constituents include minor troiliteBrass colored non-magnetic mineral of iron sulfide, FeS, found in a variety of meteorites. and chromiteBrownish-black oxide of chromium and iron (Cr-Fe oxide), Cr2FeO4, found in many meteorite groups..

click on image for a magnified view Diagram credit: Beard et al., 81st MetSoc, #6170 (2018) A transmitted light view of a petrographic thin sectionThin slice or rock, usually 30 µm thick. Thin sections are used to study rocks with a petrographic microscope. of NWA 595 can be seen on John Kashuba’s page. The specimen of NWA 595 shown above is a 0.81 g partial slice.