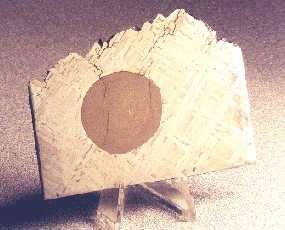 Found 1818
76° 8′ N., 64° 56′ W. At least 8 masses of this meteoriteWork in progress. A solid natural object reaching a planet’s surface from interplanetary space. Solid portion of a meteoroid that survives its fall to Earth, or some other body. Meteorites are classified as stony meteorites, iron meteorites, and stony-iron meteorites. These groups are further divided according to their mineralogy and have been recovered from the glacial region of Greenland having a total weight of 58 tons, the largest combined mass of any other recovered meteorite. The most recent found mass was a 20-ton mass named Agpalilik found in 1963. It has undergone 0.5 mm of corrosion on the above ground portion with more than 2 mm of the surface lost on portions below the soil line. Chlorides are a significant invasive elementSubstance composed of atoms, each of which has the same atomic number (Z) and chemical properties. The chemical properties of an element are determined by the arrangement of the electrons in the various shells (specified by their quantum number) that surround the nucleus. In a neutral atom, the number of contributing to the deterioration.