Iron, IIAB, coarsest octahedriteMost Common type of iron meteorite, composed mainly of taenite and kamacite and named for the octahedral (eight-sided) shape of the kamacite crystals. When sliced, polished and etched with an acid such as nitric acid, they display a characteristic Widmanstätten pattern. Spaces between larger kamacite and taenite plates are often
(Compositionally related to group IIG) 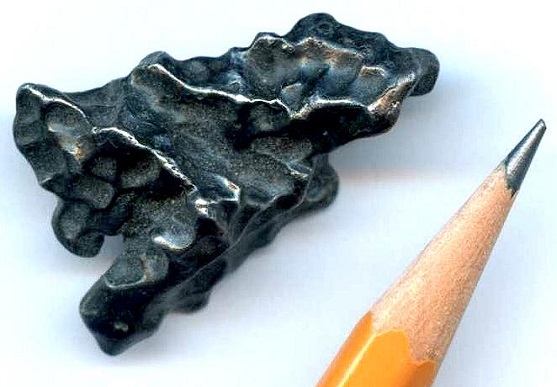 Fell February 12, 1947
46° 9′ 36′ N., 134° 39′ 12′ E. At 10:38 A.M. in the Sikhote-Alin Mountains of eastern Siberia, people witnessed the largest single meteoriteWork in progress. A solid natural object reaching a planet’s surface from interplanetary space. Solid portion of a meteoroid that survives its fall to Earth, or some other body. Meteorites are classified as stony meteorites, iron meteorites, and stony-iron meteorites. These groups are further divided according to their mineralogy and fallMeteorite seen to fall. Such meteorites are usually collected soon after falling and are not affected by terrestrial weathering (Weathering = 0). Beginning in 2014 (date needs confirmation), the NomComm adopted the use of the terms "probable fall" and "confirmed fall" to provide better insight into the meteorite's history. If ever recorded. The brilliant bolideA very bright fireball that breaks apart in the atmosphere with a minimum brightness approximately equivalent to the full moon. approached from the north accompanied by echoed detonations and ended in a huge roar as it exploded in the atmosphere, sending thousands of fragments to the frozen ground of the snow-covered taiga forest.

A subsequent search resulted in the discovery of over 100 impact pits and the recovery of over 30 tons of material within an ellipse having dimensions of 12 × 4 km. It is calculated that an initial mass of between 200 and 500 tons having a velocity of ~14.5 km/s experienced multiple fragmentations at low altitude from 28 to 16 km or less. Consequently, fragments fell at relatively low velocities, below 3.5 km/s, and developed both smooth, regmaglypted surfaces and ragged, twisted surfaces. The shock waveAbrupt perturbation in the temperature, pressure and density of a solid, liquid or gas, that propagates faster than the speed of sound. from the explosion was felt hundreds of miles away, while a dark funnel-shaped smoke trail visible from over 300 km away lingered in the sky until that evening. An artist by the name of Medvedev witnessed the dramatic event and captured the moment on canvas (see photo below). Through eyewitness reports, the orbital elements were calculated; the asteroid had a semi-major axis of 2.162 A.U. Of the estimated 100 tons of material that reached the Earth, most was in the form of ablationGradual removal of the successive surface layers of a material through various processes. • The gradual removal and loss of meteoritic material by heating and vaporization as the meteoroid experiences frictional melting during its passage through the atmosphere. The resulting plasma ablates the meteor and, in cases where a meteor dust. The largest single mass recovered weighs 1,745 kg and has an oriented, shield-like shape. Shrapnel-type fragments were found imbedded in nearby trees while regmaglypted individuals, some adorned with their own miniature impact craters, were found around many craters; the largest craterBowl-like depression ("crater" means "cup" in Latin) on the surface of a planet, moon, or asteroid. Craters range in size from a few centimeters to over 1,000 km across, and are mostly caused by impact or by volcanic activity, though some are due to cryovolcanism. measuring 28 meters across and 6 meters deep. Sikhote-Alin has a coarsest octahedrite Thomson (Widmanstätten) structure and is a typical member of the chemical class IIAB. At an earlier time, a division of the similar magmatic irons into the IIA and IIB groups was made based on this structure, but because there is no compositional hiatus between these groups, such a division is considered arbitrary and is no longer recognized (Wasson et al., 2007). Based on the Pb–Ag isochron, one group of IIAB irons with higher Ir contents gives a younger age of 8.9 m.y. after CAIsSub-millimeter to centimeter-sized amorphous objects found typically in carbonaceous chondrites and ranging in color from white to greyish white and even light pink. CAIs have occasionally been found in ordinary chondrites, such as the L3.00 chondrite, NWA 8276 (Sara Russell, 2016). CAIs are also known as refractory inclusions since they, while another group with lower Ir contents crystallized later at 10.9 m.y. after CAIs (Theis et al., 2011). The age of Sikhote Alin suggests an even later crystallizationPhysical or chemical process or action that results in the formation of regularly-shaped, -sized, and -patterned solid forms known as crystals. or perhaps that it experienced a resetting event. However, results of age studies conducted by Kruijer et al. (2012, 2013), utilizing noble gasElement occurring in the right-most column of the periodic table; also called "inert" gases. In these gases, the outer electron shell is completely filled, making them very unreactive. and Hf–W chronometry for those IIAB irons that have the lowest CRE ages, indicate coreIn the context of planetary formation, the core is the central region of a large differentiated asteroid, planet or moon and made up of denser materials than the surrounding mantle and crust. For example, the cores of the Earth, the terrestrial planets and differentiated asteroids are rich in metallic iron-nickel. formation occurred ~1.0–1.5 m.y. after CAIs, predating the accretionAccumulation of smaller objects into progressively larger bodies in the solar nebula leading to the eventual formation of asteroids, planetesimals and planets. The earliest accretion of the smallest particles was due to Van der Waals and electromagnetic forces. Further accretion continued by relatively low-velocity collisions of smaller bodies in the of most chondriteChondrites are the most common meteorites accounting for ~84% of falls. Chondrites are comprised mostly of Fe- and Mg-bearing silicate minerals (found in both chondrules and fine grained matrix), reduced Fe/Ni metal (found in various states like large blebs, small grains and/or even chondrule rims), and various refractory inclusions (such parent bodies. Furthermore, they determined that iron from groups IIIAB and IVA began segregating ~1.5–2.0 m.y. after CAIs, while segregation in groups IVB and IID occurred still later, ~2.0–3.0 m.y. after CAIs. Recently, it was argued by Wasson and Choe (2009) that group IIG irons are chemically similar to those of the IIAB iron group, forming extensions to IIAB trends on element–AuThe astronomical unit for length is described as the "mean" distance (average of aphelion and perihelion distances) between the Earth and the Sun. Though most references state the value for 1 AU to be approximately 150 million kilometers, the currently accepted precise value for the AU is 149,597,870.66 km. The diagrams. They suggest that the formation of IIG irons occurred inside isolated P-rich cavities which remained after crystallization of an evolved IIAB magmaMolten silicate (rock) beneath the surface of a planetary body or moon. When it reaches the surface, magma is called lava. (see the Tombigbee River page for more complete details). The specimen shown above is a baby thumbprinted individual weighing 17.5 g.