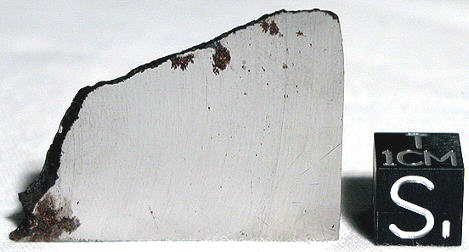 Found 1859
32° 14′ N., 88° 12′ W. The Tombigbee River meteoriteWork in progress. A solid natural object reaching a planet’s surface from interplanetary space. Solid portion of a meteoroid that survives its fall to Earth, or some other body. Meteorites are classified as stony meteorites, iron meteorites, and stony-iron meteorites. These groups are further divided according to their mineralogy and comprises a number of masses that fell over a 14 km ellipse aligned almost in a north–south direction (the largest masses to the south) in Choctaw County, near Jachin, Alabama. Although a meteorHow long Sonic booms Of the several 10s of tons of cosmic material entering Earth's atmosphere each day, only about one ton reaches the surface. An object's chance of survival depends on its initial mass, speed and angle of entry, and friability (tendency to break up). Micrometeoroids radiate heat so that was seen over most of Alabama in early 1848 was reported in newspapers from cities in the region of Jachin, the high level of oxidationOxidation and reduction together are called redox (reduction and oxidation) and generally characterized by the transfer of electrons between chemical species, like molecules, atoms or ions, where one species undergoes oxidation, a loss of electrons,  while another species undergoes reduction, a gain of electrons. This transfer of electrons between reactants exhibited by the Tombigbee iron masses make an association doubtful. The first of these masses, weighing 757 g, was discovered in 1859 by Mr. Ben Johnson. This first mass, along with five of the larger masses weighing ~ 15.0, 12.0, 9.2, 3.6, and 3.3 kg, were sold to the mineralInorganic substance that is (1) naturally occurring (but does not have a biologic or man-made origin) and formed by physical (not biological) forces with a (2) defined chemical composition of limited variation, has a (3) distinctive set of of physical properties including being a solid, and has a (4) homogeneous dealer A. E. Foote in 1899.