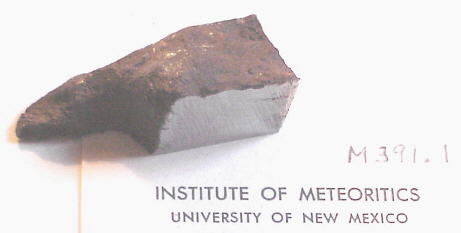 Found 1981
32° 53′ N., 101° 53′ W. A single mass of 16.9 kg was found 16 km north and 3 km west of Lamesa, Dawson County, Texas. It is was previously resolved to be a member of the small IIIC iron group based on its lower Ni content and higher contents of Ga, Ge, and Ir. Recently, a taxonomic revision was proposed by Wasson and Kallemeyn (2002) that includes iron meteorites from the IAB–IIICD group, along with numerous IAB-related meteorites. On a Ni-Au diagram, Lamesa and the other former IIIC members resolve a low-Au, medium-Ni subgroup (sLM), while the former IIID members resolve a low-Au, high-Ni subgroup (sLH). 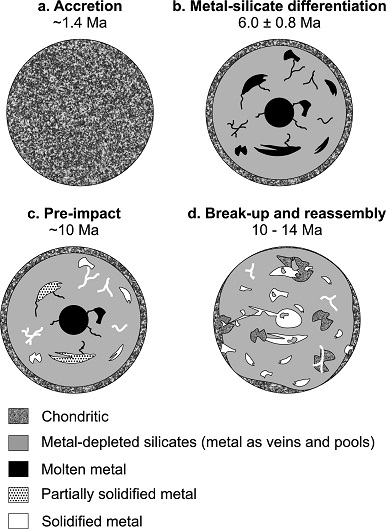 Diagram credit: Worsham et al., Earth and Planetary Science Letters, vol. 467, p. 164 (2017)
‘Characterizing cosmochemical materials with genetic affinities to the Earth: Genetic and chronological diversity within the IAB iron meteoriteMeteorite composed mainly of iron (Fe) and nickel (Ni) in the form of two alloys, kamacite and taenite. Due to their metallic makeup and extraordinary weight, iron meteorites are easily distinguished from ordinary rocks. Also, because they rarely break up in the air and suffer much less from the effects Click on Term to Read More complex’
(https://doi.org/10.1016/j.epsl.2017.02.044) Most of the IAB complex members contain reducedOxidation and reduction together are called redox (reduction and oxidation) and generally characterized by the transfer of electrons between chemical species, like molecules, atoms or ions, where one species undergoes oxidation, a loss of electrons,  while another species undergoes reduction, a gain of electrons. This transfer of electrons between reactants Click on Term to Read More, near-chondritic silicates containing planetary-type rare gases, and these are closely related to the chondritic winonaites. Based on the similar silicate textures, reduced mineralInorganic substance that is (1) naturally occurring (but does not have a biologic or man-made origin) and formed by physical (not biological) forces with a (2) defined chemical composition of limited variation, has a (3) distinctive set of of physical properties including being a solid, and has a (4) homogeneous Click on Term to Read More chemistry, and O and Mo isotopes, it is presumed that the winonaites and the IAB complex irons originated on a common parent body. Utilizing a Ge/Ni vs. AuThe astronomical unit for length is described as the "mean" distance (average of aphelion and perihelion distances) between the Earth and the Sun. Though most references state the value for 1 AU to be approximately 150 million kilometers, the currently accepted precise value for the AU is 149,597,870.66 km. The Click on Term to Read More/Ni coupled diagram, Hidaka et al. (2015) determined that FeNi-metal in the winonaitea partially differentiated asteroid that was disrupted just as it began to form an Fe core and a silicate-rich crust. This disrupting impact mixed silicates into molten Ni-Fe metal forming the silicated IAB irons, and mixed olivine-rich residues of partial melts into unmelted silicates, forming the winonaites. A few winonaites Click on Term to Read More Y-8005 plots in the field of the sLL subgroup of the IAB complex irons. Moreover, the metal in Y-8005 retains a near chondritic composition likely representative of the precursor material of the parent body. In view of these findings, Hidaka et al. (2015) suggest that the sLL subgroup rather than the MG represents the primitive metal of the IAB–winonaite parent body, with the MG possibly representing a partial melt of the sLL subgroup. In a subsequent analysis of the IAB iron complex, Worsham et al. (2017) demonstrated that the Mo isotopeOne of two or more atoms with the same atomic number (Z), but different mass (A). For example, hydrogen has three isotopes: 1H, 2H (deuterium), and 3H (tritium). Different isotopes of a given element have different numbers of neutrons in the nucleus. Click on Term to Read More data for the two winonaites they studied, Winona and HaH 193, also attest to a common parent body for winonaites and the MG/sLL irons. Dey et al. (2019) employed 17O and ε54Cr values for several irons and their associated silicates/oxides to investigate i) if each iron and its associated phases originated on a common parent body (i.e., an endogenous mixture of coreIn the context of planetary formation, the core is the central region of a large differentiated asteroid, planet or moon and made up of denser materials than the surrounding mantle and crust. For example, the cores of the Earth, the terrestrial planets and differentiated asteroids are rich in metallic iron-nickel. Click on Term to Read More and mantleMain silicate-rich zone within a planet between the crust and metallic core. The mantle accounts for 82% of Earth's volume and is composed of silicate minerals rich in Mg. The temperature of the mantle can be as high as 3,700 °C. Heat generated in the core causes convection currents in Click on Term to Read More vs. an exogenous mixture through impact), and ii) if any genetic connection exists between the irons and other meteoriteWork in progress. A solid natural object reaching a planet’s surface from interplanetary space. Solid portion of a meteoroid that survives its fall to Earth, or some other body. Meteorites are classified as stony meteorites, iron meteorites, and stony-iron meteorites. These groups are further divided according to their mineralogy and Click on Term to Read More groups (e.g., IAB with winonaites, IIE with H chondritesChondrite meteorites are the most common accounting for 83.6% of falls. Chondrites are comprised mostly of Fe- and Mg-bearing silicate minerals (found in both chondrules and fine grained matrix), free Fe/Ni metal (found in various states like large blebs, small grains and/or even chondrule rims), and various refractory inclusions (such Click on Term to Read More, and Eagle Station pallasites with CK chondrites). Three IAB irons were employed in the study, and it was demonstrated on a coupled diagram that although the ε54Cr values for the iron component plot in the winonaite field, values for the silicate component plot in a distinct region on an O–Cr coupled diagram (see diagram below). From these results they ascertained that the the IAB silicated irons formed through an impact-generated mixture comprising iron from a winonaite-related parent body and silicate from an unrelated and otherwise unsampled parent body. Incorporation of the silicates into the FeNi-metal host took place at a depth greater than 2 km, allowing time for a Thomson (Widmanstätten) structure to develop during a long cooling phase. Fractional crystallization occurred in some large molten metal pools, followed by very slow cooling, to produce the broad range of features found in certain IAB meteorites (e.g., silicate-poor, graphite–troilite-rich inclusions and extremely high Ni contents). Other results from their study can be found on the Miles and Eagle Station pages. 17O vs. ε54Cr for Irons and Pallasites

click on photo for a magnified view Diagrams credit: Dey et al., 50th LPSC, #2977 (2019)
Members of the medium- and high-Ni subgroups are best resolved from the low-Ni IAB members based on Ir/Ni relationships, since Ir shows more variation at lower Ni concentrations. This resolves the two subgroups well at higher Ni concentrations but fails to resolve them at the lower concentrations. The occurrence of certain very-high-Ni members within the resolved IAB complex can be explained by limited fractional crystallization in small, meter-sized, Ni-rich impact-melt pools. New members of the sLM subgroup of the IAB complex have been found in Northwest Africa, including NWA 968, 2680, 4024, and 5980, the latter two classified as winonaites (Wasson, 2011). The specimen of Lamesa shown above is a 40.6 g partial slice with oxidizedOxidation and reduction together are called redox (reduction and oxidation) and generally characterized by the transfer of electrons between chemical species, like molecules, atoms or ions, where one species undergoes oxidation, a loss of electrons,  while another species undergoes reduction, a gain of electrons. This transfer of electrons between reactants Click on Term to Read More fusion crustMelted exterior of a meteorite that forms when it passes through Earth’s atmosphere. Friction with the air will raise a meteorite’s surface temperature upwards of  4800 K (8180 °F) and will melt (ablate) the surface minerals and flow backwards over the surface as shown in the Lafayette meteorite photograph below. Click on Term to Read More. This specimen was previously part of the Oscar Monnig Collection at Texas Christian University, Fort Worth, Texas.

Login with your Social ID
Follow Us
Iron Types:
Irons for Sale
Resources
Do NOT follow this link or you will be banned from the site!
×