LodraniteRare type of primitive achondrite named after the Lodran meteorite that fell in Pakistan in 1868. Initially, lodranites were grouped with the stony-iron meteorites because they contain silicates (olivine, orthopyroxene, and minor plagioclase) and Fe-Ni metal in nearly equal proportions. However, since discovery of the closely related acapulcoite group, lodranites
anomalous, metal-rich
(previously classified as Iron, IAB complex, NWA 468 duo)

Purchased before January, 2000
no coordinates recorded A relatively fresh (W1) silicated iron meteoriteMeteorite composed mainly of iron (Fe) and nickel (Ni) in the form of two alloys, kamacite and taenite. Due to their metallic makeup and extraordinary weight, iron meteorites are easily distinguished from ordinary rocks. Also, because they rarely break up in the air and suffer much less from the effects weighing 6,100 g was purchased from a Moroccan dealer by Dr. D. Gregory in Tucson, Arizona. The Moroccan dealer had previously purchased the meteoriteWork in progress. A solid natural object reaching a planet’s surface from interplanetary space. Solid portion of a meteoroid that survives its fall to Earth, or some other body. Meteorites are classified as stony meteorites, iron meteorites, and stony-iron meteorites. These groups are further divided according to their mineralogy and in Alnif, Morocco. MineralInorganic substance that is (1) naturally occurring (but does not have a biologic or man-made origin) and formed by physical (not biological) forces with a (2) defined chemical composition of limited variation, has a (3) distinctive set of of physical properties including being a solid, and has a (4) homogeneous analyses and classification of the type specimen of NWA 468 was completed at UCLA by J. Wasson and A. Rubin. The main massLargest fragment of a meteorite, typically at the time of recovery. Meteorites are commonly cut, sliced or sometimes broken thus reducing the size of the main mass and the resulting largest specimen is called the "largest known mass". remains with the purchaser, while a 185 g specimen is maintained at the Royal Ontario Museum in Toronto, Canada.

Diagram credit: Sanborn et al., 77th Meteoritical Society Meeting #5169 (2014) In their study of the fossil meteoriteThe textural, mineralogical or compositional remnant within a sedimentary rock of a meteorite that fell millions of years ago and found in Ordovician limestone from Sweden. Read Tiny Traces of a Big Asteroid Breakup for a complete writeup on this subject. In picture to the left a nautiloid shell is Österplana 065, Schmitz et al. (2016) included oxygen and chromium isotopic data for NWA 468 in a coupled Δ17O vs. ε54Cr diagram (shown below). This higher resolution diagram also clearly demonstrates that this meteorite plots within the acapulcoite–lodranite region in isotope space. Chromium vs. Oxygen Isotope Plot

click on image for a magnified view Diagram credit: Schmitz, B. et al., Nature Communications, vol. 7, p. 4 (2016, open access link)
‘A new type of solar-system material recovered from Ordovician marine limestoneA common form of calcium carbonate (CaCO3). Other common forms of CaCO3 include chalk and marble. ‘
(https://doi.org/10.1038/ncomms11851) A comprehensive study of the H4 chondrite Grove Mountains (GRV) 020043 was conducted by Li et al. (2018). They demonstrated that the mineralogy, geochemistry, and O- and Cr-isotopic compositions of this meteorite support the reclassification to ‘Acapulcoite chondrite’, representing the chondritic, unmelted, outermost layer of the acapulcoite–lodranite parent body. They also provided clear evidence for the origination of NWA 468 on the ACA–LOD parent body, which, along with the metal-rich lodranite GRA 95209 (NASA lab photo), are considered to represent the deepest lithology (early coreIn the context of planetary formation, the core is the central region of a large differentiated asteroid, planet or moon and made up of denser materials than the surrounding mantle and crust. For example, the cores of the Earth, the terrestrial planets and differentiated asteroids are rich in metallic iron-nickel. segregation) of the parent body. A schematic representation of the acapulcoite–lodranite parent body was presented by Li et al. (2018): Interior Structure of the Acapulcoite–Lodranite Parent Body

Schematic diagram credit: Li et al., GCA, vol. 242, p. 96 (2018)
‘Evidence for a Multilayered Internal Structure of the Chondritic Acapulcoite–Lodranite Parent Asteroid’
(https://doi.org/10.1016/j.gca.2018.09.004) The specimen of NWA 468 shown above is a 2.45 g partial slice. The photo below shows a full slice with a close-up of the lower left corner from which the above specimen was removed. The remainder of this slice is in the collection of UCLA. 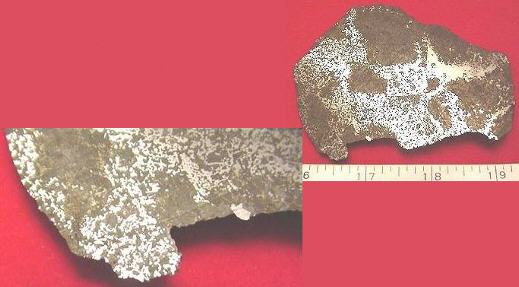