Martian ShergottiteIgneous stony meteorite with a Martian origin consisting mainly of plagioclase (or a shocked glass of plagioclase composition) and pyroxene. They are the most abundant type of SNC meteorites and the type member is the Shergotty meteorite, which fell in India in 1865. Shergottites are igneous rocks of volcanic or
olivine-phyric ∗
(depleted, permafic, reducedOxidation and reduction together are called redox (reduction and oxidation) and generally characterized by the transfer of electrons between chemical species, like molecules, atoms or ions, where one species undergoes oxidation, a loss of electrons,  while another species undergoes reduction, a gain of electrons. This transfer of electrons between reactants) 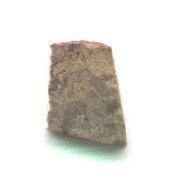 Found January 24, 2000
18° 18.97′ N., 54° 08.87′ E. A stone weighing 1,056 g was found in the Dhofar region of Oman. This meteoriteWork in progress. A solid natural object reaching a planet’s surface from interplanetary space. Solid portion of a meteoroid that survives its fall to Earth, or some other body. Meteorites are classified as stony meteorites, iron meteorites, and stony-iron meteorites. These groups are further divided according to their mineralogy and fell to Earth ~340 t.y. ago, making it one of the oldest recovered meteorites from a hot desert (the record is held by the lunaite, Dhofar 025, which fell 500–600 t.y. ago). Dhofar 019 is a basaltic/doleritic rock consisting primarily (~64 vol%) of the low-Ca pyroxeneA class of silicate (SiO3) minerals that form a solid solution between iron and magnesium and can contain up to 50% calcium. Pyroxenes are important rock forming minerals and critical to understanding igneous processes. For more detailed information, please read the Pyroxene Group article found in the Meteoritics & Classification category. pigeoniteLow-Ca clinopyroxene, (Ca,Mg,Fe)SiO3, found as a major mineral in eucrites and shergottites. In order to be considered pigeonite, the clinopyroxene must contain 5 to 20 mol % of calcium (Wo5 - 20). Chondrites of petrologic types 4 and below contain significant low-Ca clinopyroxene. During metamorphism to higher temperatures, all existing with rims of augiteHigh-Ca clinopyroxene, (Ca,Mg,Fe)SiO3, that occurs in many igneous rocks, particularly those of basaltic composition. In order to be considered augite, the clinopyroxene must contain 20 to 45 mol % of calcium (Wo20 - 45). An important and unique Martian meteorite is NWA 8159, that has been classified as an augite basalt., along with a large content (25 vol%) of maskelyniteNatural glass composed of isotropic plagioclase produced during shock metamorphism (not melting) at pressures of ~30 GPa. Maskelynite is commonly found in shergottites though also found in some ordinary chondrites, HED and lunar meteorites. It is also found in association with meteorite impact craters and crater ejecta. Named after British (from shock conversion of plagioclaseAlso referred to as the plagioclase feldspar series. Plagioclase is a common rock-forming series of feldspar minerals containing a continuous solid solution of calcium and sodium: (Na1-x,Cax)(Alx+1,Si1-x)Si2O8 where x = 0 to 1. The Ca-rich end-member is called anorthite (pure anorthite has formula: CaAl2Si2O8) and the Na-rich end-member is albite feldsparAn alumino-silicate mineral containing a solid solution of calcium, sodium and potassium. Over half the Earth’s crust is composed of feldspars and due to their abundance, feldspars are used in the classification of igneous rocks. A more complete explanation can be found on the feldspar group page.) and a small amount (9 vol%) of olivineGroup of silicate minerals, (Mg,Fe)2SiO4, with the compositional endpoints of forsterite (Mg2SiO4) and fayalite (Fe2SiO4). Olivine is commonly found in all chondrites within both the matrix and chondrules, achondrites including most primitive achondrites and some evolved achondrites, in pallasites as large yellow-green crystals (brown when terrestrialized), in the silicate portion (Borg et al., 2001). Accessory components include chromiteBrownish-black oxide of chromium and iron (Cr-Fe oxide), Cr2FeO4, found in many meteorite groups., ulvöspinel, ilmeniteTi-Fe oxide, TiFeO3, found in achondrites, lunar mare basalts, and shergottites. Ilmenite forms as a primary mineral in mafic igneous rocks. It crystallizes relatively early out of a magma before most of the other minerals, and as a result, the heavier crystals of ilmenite precipitate to the bottom of the magma, chlorapatite, merrillite, magnetiteFe oxide, Fe2+Fe3+2O4, containing oxidized iron (Fe3+) found in the matrix of carbonaceous chondrites and as diagnostic component in CK chondrites. In CK chondrites, magnetite is typically chromian, containing several wt. % Cr2O3., and pyrrhotiteIron sulfide group of minerals whose composition ranges widely between its end members pyrrhotite (Fe7S8) whose crystal structure is monoclinic, and troilite (FeS) whose crystal structure is hexagonal. Its general formula is Fe1−xS (where x = 0 to 0.17). The troilite phase is found mainly in meteorites and in the, along with secondary weathering products including calcite, sulfates, celestine (SrSO4), barite, Fe-hydroxides, and Mg-phyllosilicates (Shukolyukov et al., 2002; Hallis et al., 2017). Rounded, zoned (smectite–calcite–gypsum) ‘orangettes’ similar to those found in ALH 84001 are present within maskelynite fractures; however, those in Dhofar 019 were determined by Hallis et al. (2017) to be of terrestrial origin through dissolution/deposition processes over its lengthy residence in the desert. Similar orange-colored features present in the shergottite SaU 094 have also been atributed to terrestrial alteration (Gnos et al., 2002). .

Dhofar 019 has a heterogeneous texture, with elemental compositions similar to EETA79001A, and features similar to DaG 476 and other olivine-bearing shergottitesIgneous stony meteorite with a Martian origin consisting mainly of plagioclase (or a shocked glass of plagioclase composition) and pyroxene. They are the most abundant type of SNC meteorites and the type member is the Shergotty meteorite, which fell in India in 1865. Shergottites are igneous rocks of volcanic or, including the presence of zoned olivine megacrysts. However, the majority of the olivine grains in Dhofar 019 are much smaller than those present in other olivine-bearing shergottites, and have lower Ni and Mg, and higher Co and Fe contents, indicative of a more evolved magmaMolten silicate (rock) beneath the surface of a planetary body or moon. When it reaches the surface, magma is called lava. source than that of EETA79001A or DaG 476. Other differences include a lack of orthopyroxeneOrthorhombic, low-Ca pyroxene common in chondrites. Its compositional range runs from all Mg-rich enstatite, MgSiO3 to Fe-rich ferrosilite, FeSiO3. These end-members form an almost complete solid solution where Mg2+ substitutes for Fe2+ up to about 90 mol. % and Ca substitutes no more than ~5 mol. % (higher Ca2+ contents occur in Dhofar 019 compared to other shergottites, and a larger compositional range for olivine, maskelynite, and spinelMg-Al oxide, MgAl2O4, found in CAIs., indicative of a rapid cooling rate. Melt inclusions composed of pyroxene and melt glass are ubiquitous in the olivine grains.
*A new shergottite subgroup was proposed which comprises the shergottites having olivine–porphyritic textures. The name picritic shergottite was suggested for this new subgroup by Barrat et al. (2002), while the name olivine-phyric shergottite was suggested by Goodrich (2002). Goodrich suggests that the term picritic shergottite implies certain petrogenetic characteristics, such as mixing of two compositionally distinct magma sources, which is not necessarily the case for all members of this new subgroup; therefore the purely descriptive term olivine-phyric is favored.

Trace elementSubstance composed of atoms, each of which has the same atomic number (Z) and chemical properties. The chemical properties of an element are determined by the arrangement of the electrons in the various shells (specified by their quantum number) that surround the nucleus. In a neutral atom, the number of analyses suggest that Dhofar 019 and DaG 476 were derived from similar but unique incompatible element-depleted parental magma source regions, comparable to the near primary melt represented by Y-980459 but with a lower abundance of Ni; nevertheless, Dhofar 019 is texturally more similar to Zagami and Shergotty. A crystal size distribution analysis reveals a very small grain size, nearly identical to that of Zagami; the size of the pyroxene laths in Dhofar 019 (0.196 mm) is intermediate between that of Zagami (0.213 mm) and DaG 476 (0.082 mm). Calculations based on olivine zoning profiles indicate that the smaller olivine grains nucleated at depth within a late-stage, Fe-rich magma, where they underwent limited diffusionMovement of particles from higher chemical potential to lower chemical potential (chemical potential can in most cases of diffusion be represented by a change in concentration). Diffusion, the spontaneous spreading of matter (particles), heat, or momentum, is one type of transport phenomena. Because diffusion is thermally activated, coefficients for diffusion. The larger and more magnesian olivine megacrysts are an early crystallizationPhysical or chemical process or action that results in the formation of regularly-shaped, -sized, and -patterned solid forms known as crystals. product. After a short period, measured in days to weeks, the olivine grains were infused with a magnesian magma, which was rapidly cooled within a few meters of the surface—too rapidly to establish equilibriumTerm used to describe physical or chemical stasis. Physical equilibrium may be divided into two types: static and dynamic. Static equilibrium occurs when the components of forces and torques acting in one direction are balanced by components of forces and torques acting in the opposite direction. A system in static with the melt. Mikouchi and Miyamoto (2002) calculated a rapid cooling rate of approximately 0.05–0.1°C/hour from 1200°C to 700°C, which corresponds to a burial depth of ~5 m, probably within a lavaHot molten or semifluid rock derived from a volcano or surface fissure from a differentiated and magmatically active parent body. flow.

Probable crystallization ages of 575 (±7) and 525 (±56) m.y. were calculated by Borg et al. (2001) based on Sm–Nd and Rb–Sr, respectively, while an Ar–Ar derived age for maskelynite of 642 (±72) m.y. was obtained by Korochantseva et al. (2007), and an age of ~650 m.y. was obtained by Garrison and Bogard (2001); all of these ages are in agreement within error margins. The calculated Sm–Nd age of Tissint, the only fallMeteorite seen to fall. Such meteorites are usually collected soon after falling and are not affected by terrestrial weathering (Weathering = 0). Beginning in 2014 (date needs confirmation), the NomComm adopted the use of the terms "probable fall" and "confirmed fall" to provide better insight into the meteorite's history. If representing this depleted, olivine-phyric martian meteoriteOver 30 of the meteorites found on Earth almost certainly came from Mars (see http://www.imca.cc/mars/martian-meteorites.htm and http://www2.jpl.nasa.gov/snc/). All but one belongs to the group known as SNC meteorites, which includes the shergottites, nakhlites, and chassignites. SNC meteorites contain minerals that crystallized within the past 1.35 to 0.15 Ga, making them group, is 596 (±23) m.y., which is consistent with that of Dhofar 019 (Brennecka et al., 2013).

Utilizing a cratering model which employs a cratering frequency per area based on a lunar reference, and a Mars/Moon cratering ratio of 1.55, Nyquist et al. (2009) reasoned that the region of Mars known as ‘Amazonis unit 2 north’ could correspond to an age of ~0.5 b.y. This time period, known as the Hesperian epoch, is consistent with hosting the ejection of not only the older shergottites, such as Dhofar 019, but also the nakhlites and chassignitesThe group is part of the SNC martian trio and named after the meteorite seen to fall in Chassigny, France, in 1815. Its subsequent recovery led to it being one of the first meteorites to be recognized as a genuine rock from space. Chassigny resembles a terrestrial dunite - a. Ejection times of the younger shergottites, such as Zagami and NWA 1460/480, are consistent with the Early Amazonian epoch. Notably, these two cratering epochs account for ~30% of the martian surface, and this fact provides a solution to the conundrum whereby too many young meteorites are delivered from what was previously thought to be a mostly old surface.

The specimen of Dhofar 019 shown above is a 0.16 g interior partial slice. The photo below shows the in situ mass of Dhofar 019 as it was found in the desert. 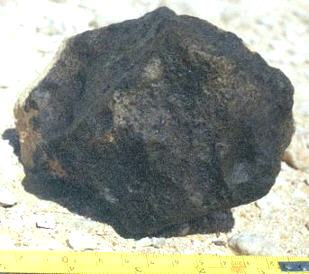