Lunar Feldspathic BrecciaWork in Progress ... A rock that is a mechanical mixture of different minerals and/or rock fragments (clasts). A breccia may also be distinguished by the origin of its clasts: (monomict breccia: monogenetic or monolithologic, and polymict breccia: polygenetic or polylithologic). The proportions of these fragments within the unbrecciated material
(fragmental breccia or immature regolithMixture of unconsolidated rocky fragments, soil, dust and other fine granular particles blanketing the surface of a body lacking an atmosphere. Regolith is the product of "gardening" by repeated meteorite impacts, and thermal processes (such as repeated heating and cooling cycles).   breccia) 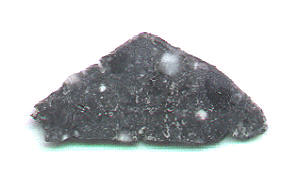 Found November 29, 1999
19° 19.32′ N., 54° 50.85′ E. This fresh, fusion-crusted lunar meteoriteWork in progress. A solid natural object reaching a planet’s surface from interplanetary space. Solid portion of a meteoroid that survives its fall to Earth, or some other body. Meteorites are classified as stony meteorites, iron meteorites, and stony-iron meteorites. These groups are further divided according to their mineralogy and, weighing just 174 g, was found in the Dhofar region of Oman. Although this meteorite has a terrestrial age of 40 (±20) t.y. (Nishiizumi et al., 2004), terrestrial weathering effects are very slight, as evidenced by µm-sized carbonateMineral or compound containing carbon and oxygen (i.e. calcium carbonate, CaCO3, calcite). and sulfate minerals. Although Dhofar 081 is classified as a feldspathic fragmental highland breccia, its relatively high 20Ne content might be diagnostic of an immature regolith breccia (Warren et al., 2005). It is composed of various clasts of older impact-melt breccias and plutonicGeology: Igneous intrusive body that forms when magma is injected into host rocks and solidifies. Plutons occur in the crust of asteroids undergoing differentiation or planets. Named after Pluto, the Roman god of the underworld. Plutonic rocks are the rocks found within a pluton. Astronomy: Category of planet including all rocks. Individual clastA mineral or rock fragment embedded in another rock. types include crystalline fragments of gabbroic anorthosites, granulites, highland basalts, various impact-melt breccias, and high-An plagioclaseAlso referred to as the plagioclase feldspar series. Plagioclase is a common rock-forming series of feldspar minerals containing a continuous solid solution of calcium and sodium: (Na1-x,Cax)(Alx+1,Si1-x)Si2O8 where x = 0 to 1. The Ca-rich end-member is called anorthite (pure anorthite has formula: CaAl2Si2O8) and the Na-rich end-member is albite feldspars. The matrixFine grained primary and silicate-rich material in chondrites that surrounds chondrules, refractory inclusions (like CAIs), breccia clasts and other constituents. minerals consist mostly of olivineGroup of silicate minerals, (Mg,Fe)2SiO4, with the compositional endpoints of forsterite (Mg2SiO4) and fayalite (Fe2SiO4). Olivine is commonly found in all chondrites within both the matrix and chondrules, achondrites including most primitive achondrites and some evolved achondrites, in pallasites as large yellow-green crystals (brown when terrestrialized), in the silicate portion and augiteHigh-Ca clinopyroxene, (Ca,Mg,Fe)SiO3, that occurs in many igneous rocks, particularly those of basaltic composition. In order to be considered augite, the clinopyroxene must contain 20 to 45 mol % of calcium (Wo20 - 45). An important and unique Martian meteorite is NWA 8159, that has been classified as an augite basalt., with minor FeNi-metal, ilmeniteTi-Fe oxide, TiFeO3, found in achondrites, lunar mare basalts, and shergottites. Ilmenite forms as a primary mineral in mafic igneous rocks. It crystallizes relatively early out of a magma before most of the other minerals, and as a result, the heavier crystals of ilmenite precipitate to the bottom of the magma, spinelMg-Al oxide, MgAl2O4, found in CAIs., and rare devitrified brown glass, but no evidence of maficOne of the two broad categories of silicate minerals, the other being felsic, based on its magnesium (Mg) and/or iron (Fe) content. Mafic indicates silicate minerals that are predominantly comprised of Mg and/or Fe.The term is derived from those major constituents: Magnesium + Ferrum (Latin for iron) + ic (having regolith, KREEPLunar igneous rock rich in potassium (K), rare-earth elements (REE), phosphorus (P), thorium, and other incompatible elements. These elements are not incorporated into common rock-forming minerals during magma crystallization, and become enriched in the residual magma and the rocks that ultimately crystallize from it., or mareBroad low plains surrounded by basin-forming mountains, originally thought to be a sea (pl. maria). This term is applied to the basalt-filled impact basins common on the face of the Moon visible from Earth.   basaltBasalt is the most common extrusive igneous rock on the terrestrial planets. For example, more than 90% of all volcanic rock on Earth is basalt. The term basalt is applied to most low viscosity dark silicate lavas, regardless of composition. Basalt is a mafic, extrusive and fine grained igneous rock components was identified. Some clasts have plagioclase and mafic mineralInorganic substance that is (1) naturally occurring (but does not have a biologic or man-made origin) and formed by physical (not biological) forces with a (2) defined chemical composition of limited variation, has a (3) distinctive set of of physical properties including being a solid, and has a (4) homogeneous compositions that plot within the gap separating ferroan anorthositeA phaneritic, intrusive igneous rock made with a modal composition (i.e. volume%) > 90% plagioclase feldspar of undefined composition (anorthitic to albitic, or combination thereof), and a small mafic component between 0 - 10% such as pyroxene, ilmenite, magnetite, and olivine 1. The name anorthosite is derived from the calcium-rich suite rocks (FAN) and high-magnesium suite rocks (HMS). The identification of somewhat higher abundances of solar He and Ne is consistent with a regolith setting (Korotev, 2012 and references therein).

A second stone recovered nearby weighing 251.2 g was investigated for possible pairing with Dhofar 081. Dhofar 280, has a similar chemistry and mineralogy to that of Dhofar 081, but it exhibits some important differences. Only Dhofar 280 contains regolith clasts incorporating glass spherules and FeNi-metal grains. Dhofar 280 is also distinct in containing three new Fe-silicide phases. In light of these differences, further studies were conducted to better constrain the probability of their pairing. Nazarov et al., 2003, and Demidova et al., 2003, found that Dhofar 081 and 280 form a unique group among the large number of recently recovered lunar meteoritesAchondrite meteorites from the surface of the Moon. Most were found in the hot deserts of northern Africa and Oman and others were found in the cold desert of Antarctica, although one, a 19-gram specimen, was recovered in 1990 from Calcalong Creek, Australia. These stones are of great importance because, from the Dhofar region of Oman. Dhofar 081 and 280 have similar and distinctive compositions, including a low abundance of Sm and Sc, a high abundance of feldsparAn alumino-silicate mineral containing a solid solution of calcium, sodium and potassium. Over half the Earth’s crust is composed of feldspars and due to their abundance, feldspars are used in the classification of igneous rocks. A more complete explanation can be found on the feldspar group page., and the lowest Mg# among lunaites, and they share similar degrees of weathering. An Ar systematics study conducted by Korochantseva et al. (2015) revealed that the two meteorites had very different irradiation histories on the Moon—~400 m.y. for Dhofar 280 and 500–600 m.y. for Dhofar 081. They also determined that Dhofar 280 was enriched in KREEP compared to Dhofar 081, and for the two meteorites to have experienced a common ejection event, they must have formed in separate locations in close proximity. Two additional stones, designated Dhofar 910 and Dhofar 1224, were subsequently recovered from this strewnfield and may be additional pairings. A meteorite from northwest Africa, NWA 2998, was found to have an identical highly-feldspathic composition, although with a different texture to that of the Dhofar 081 pairing group, and may be source-crater paired (Korotev et al., 2008). Based on mineralogy, chemistry, petrography, and findMeteorite not seen to fall, but recovered at some later date. For example, many finds from Antarctica fell 10,000 to 700,000 years ago. location, the Oman lunar meteorites that have been analyzed so far can be tentatively resolved into the following groups, listed in order of location from north to south (expedition team member, pers. comm.; Korotev et al., 2008):

Further studies of these finds will help to determine exactly how many independent falls are represented among the many individual Dhofar lunaites. A concise and up-to-date table of all known lunar meteorites can be found on Norbert Classen’s An Up-to-date List of Lunar Meteorites. Multiple shock features are present throughout Dhofar 081, including recrystallization, fracturing, mosaicism, and in situ melting. These features indicate that shock pressures as high as ~15–20 GPa were experienced prior to the final ejection event. One or more shock events also produced melt veins with vesicles and the lithification of previously unconsolidated material. Strong zoning of olivine grains is indicative of rapid cooling within an impact ejecta blanketGenerally symmetrical apron of ejecta surrounding a crater; it is thick at the crater's rim and thin to discontinuous at the blanket's outer edge.. Noble gasElement occurring in the right-most column of the periodic table; also called "inert" gases. In these gases, the outer electron shell is completely filled, making them very unreactive. studies suggest that Dhofar 081/280/910/1224 is not paired with other lunar meteorites from the Dhofar region, but it may be launch paired with the Antarctic lunaite, MAC 88104/5, based on their similar noble gas records. The CRE age of Dhofar 081, 680 (±140) m.y., actually represents the duration of its exposure at depth—calculated to be ~100 cm within the lunar regolith based on Kr and Xe (Lorenzetti et al., 2005), or 111–128 cm deep based on Be and Al (Nishiizumi and Caffee, 2006). Consistent with a launch from shallow depth, Dhofar 081 had a short Moon–Earth transitWhen a small celestial body moves in front of a much larger one (as when Mercury or Venus appears in silhouette against the solar disk or when a satellite passes in front of Jupiter or Saturn). The shadow of a satellite may also transit the disk of its primary. time of ~5,000 years (Nishiizumi, 2003; Nishiizumi and Caffee, 2010), and the stones resided on Earth for another ~12,000 years.

Feldspathic fragmental breccias similar in composition to Dhofar 081 were the most common rock type excavated at the North Ray CraterBowl-like depression ("crater" means "cup" in Latin) on the surface of a planet, moon, or asteroid. Craters range in size from a few centimeters to over 1,000 km across, and are mostly caused by impact or by volcanic activity, though some are due to cryovolcanism., Central Highlands, landing site of Apollo 16. However, even though Dhofar 081 has a very low abundance of mafic components and a highly anorthositic composition similar to Apollo 16 breccias, the absence of KREEP and high magnesium suite constituents makes it more likely that it originated from a ferroan, anorthosite-rich, Feldspathic Highlands Terrane, probably on the far side of the Moon. The specimen of Dhofar 081 pictured above is a 0.143 g very thin partial slice.