R chondriteChondrites are the most common meteorites accounting for ~84% of falls. Chondrites are comprised mostly of Fe- and Mg-bearing silicate minerals (found in both chondrules and fine grained matrix), reduced Fe/Ni metal (found in various states like large blebs, small grains and/or even chondrule rims), and various refractory inclusions (such brecciaWork in Progress ... A rock that is a mechanical mixture of different minerals and/or rock fragments (clasts). A breccia may also be distinguished by the origin of its clasts: (monomict breccia: monogenetic or monolithologic, and polymict breccia: polygenetic or polylithologic). The proportions of these fragments within the unbrecciated material, rumurutiiteMember of a rare group of chondrites, formerly named the Carlisle Lakes group, after a meteorite found in Australia in 1977. It is now named for the type specimen Rumuruti that fell in Kenya, Africa, in 1934. Rumuruti is the only witnessed fall of this group and only one small (tentative classification)
(possibly paired with NWA 4814) 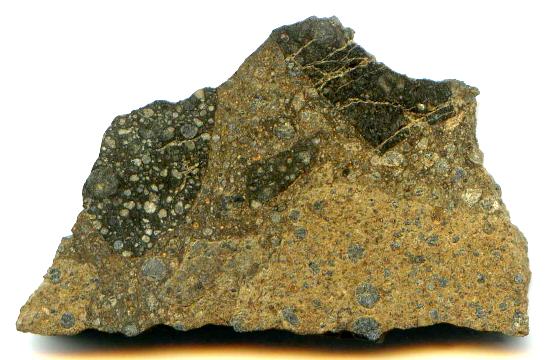 click on photo for a magnified view Found before 2007
no coordinates recorded Many possibly paired stones and fragments representing a unique rumurutiite are thought to be distributed in both Europe (300 g stone) and the United States (400 g fragments). The specimen shown above is reportedly from a lot of two large, fresh, partially fusion-crusted stones weighing together 2,635 g, acquired by American collectors/dealers. A type sample from one or more of these stones was sent to Northern Arizona University for analysis, assignment of a provisional NWA-series number, and classification; however, the exact provenance for the specimen shown above has been lost. As photographed, the specimen above exhibiting pronounced dark and lighter lithologies bears a strong resemblance to both the 300 g R3–6 NWA 2943 found in 2005, and to the 1,120 g R4 [R3–6] chondrite NWA 4814 found in 2006, either of which might or might not share a common source meteoriteWork in progress. A solid natural object reaching a planet’s surface from interplanetary space. Solid portion of a meteoroid that survives its fall to Earth, or some other body. Meteorites are classified as stony meteorites, iron meteorites, and stony-iron meteorites. These groups are further divided according to their mineralogy and. A search for more information on these meteorites could help determine whether they derive from a common meteorite, or perhaps are launch paired.

This rumurutiite exhibits clasts representing a wide variety of petrologic types. Dark, highly unequiliberated clasts containing distinct chondrulesRoughly spherical aggregate of coarse crystals formed from the rapid cooling and solidification of a melt at  ~1400 ° C. Large numbers of chondrules are found in all chondrites except for the CI group of carbonaceous chondrites. Chondrules are typically 0.5-2 mm in diameter and are usually composed of olivine represent type 3 material, while lighter clasts are more highly metamorphosed and represent petrologic types possibly as high as 6. A modified version of the Van Schmus–Wood classification scheme has been proposed by Berlin and Stöffler (2004) to accommodate the R chondrite metamorphicRocks that have recrystallized in a solid state due to changes in temperature, pressure, and chemical environment. variation present in the pyroxeneA class of silicate (SiO3) minerals that form a solid solution between iron and magnesium and can contain up to 50% calcium. Pyroxenes are important rock forming minerals and critical to understanding igneous processes. For more detailed information, please read the Pyroxene Group article found in the Meteoritics & Classification category., feldsparAn alumino-silicate mineral containing a solid solution of calcium, sodium and potassium. Over half the Earth’s crust is composed of feldspars and due to their abundance, feldspars are used in the classification of igneous rocks. A more complete explanation can be found on the feldspar group page., and sulfides, especially the lack of low-Ca pyroxene in types 5 and 6: A more comprehensive look at the rumurutiite chondrite group can be found on the DaG 013 page. The photo shown above is a 1.89 g slice exhibiting a range of petrologic types in this R chondrite breccia.