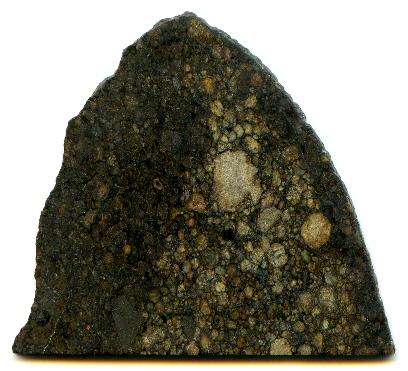 Found December 4, 1999
18° 20.5′ N., 54° 11.3′ E. Three stones with a combined weight of 2.2 kg were found in the Dhofar region of Oman and are considered to be paired. In an analysis conducted at the Vernadsky Institute in Moscow, the percent mean deviation of the FeO content in olivineGroup of silicate minerals, (Mg,Fe)2SiO4, with the compositional endpoints of forsterite (Mg2SiO4) and fayalite (Fe2SiO4). Olivine is commonly found in all chondrites within both the matrix and chondrules, achondrites including most primitive achondrites and some evolved achondrites, in pallasites as large yellow-green crystals (brown when terrestrialized), in the silicate portion (PMD-ol) was determined, a value which serves as a measure of the degree of heterogeneity of a chondriteChondrites are the most common meteorites accounting for ~84% of falls. Chondrites are comprised mostly of Fe- and Mg-bearing silicate minerals (found in both chondrules and fine grained matrix), reduced Fe/Ni metal (found in various states like large blebs, small grains and/or even chondrule rims), and various refractory inclusions (such; i.e., a chondrite with PMD-ol ≥5% is defined as unmetamorphosed or unequilibrated type 3. Dhofar 008 has a PMD-ol that is greater than 42 in at least one of the stones, indicating a highly unequilibrated petrologic grade as low as 3.0. Other stones had varying ranges prompting an initial classification of H<3.3. Further studies at the Vernadsky Institute led to the reclassification of Dhofar 008 as an L3.2/3.3. The latest studies have shown Dhofar 008 to be very similar to the transitional H/L3.6 Tieschitz:

Dhofar 008 might represent a heterogeneous, unequilibrated mixture from different magmaMolten silicate (rock) beneath the surface of a planetary body or moon. When it reaches the surface, magma is called lava. reservoirs on the L chondriteOrdinary chondrites low in free Ni-Fe metal (4 to 10 vol. %), containing olivine (Fa22-26) and the orthopyroxene hypersthene (Fs19-22). Average chondrule diameters (0.7 mm) are larger than those in H chondrites. The asteroid 433 Eros is suspected as a parent body, based on reflectance spectra, but most L chondrites parent bodyThe body from which a meteorite or meteoroid was derived prior to its ejection. Some parent bodies were destroyed early in the formation of our Solar System, while others like the asteroid 4-Vesta and Mars are still observable today., or it could derive from an intermediate chondrite parent body similar to that of Tieschitz. Dhofar 008 contains mostly porphyritic chondrulesRoughly spherical aggregate of coarse crystals formed from the rapid cooling and solidification of a melt at  ~1400 ° C. Large numbers of chondrules are found in all chondrites except for the CI group of carbonaceous chondrites. Chondrules are typically 0.5-2 mm in diameter and are usually composed of olivine, sometimes strongly zoned, in which the olivine fayalitePure* iron end-member (Fe2SiO4) of the olivine solid solution series and an important mineral in meteorites. When iron (Fe) is completely substituted by magnesium, it yields the the pure Mg-olivine end-member, forsterite (Mg2SiO4). The various Fe and Mg substitutions between these two end-members are described based on their forsteritic (Fo) content varies widely. Low-Ca pyroxeneA class of silicate (SiO3) minerals that form a solid solution between iron and magnesium and can contain up to 50% calcium. Pyroxenes are important rock forming minerals and critical to understanding igneous processes. For more detailed information, please read the Pyroxene Group article found in the Meteoritics & Classification category. is the most common silicateThe most abundant group of minerals in Earth's crust, the structure of silicates are dominated by the silica tetrahedron, SiO44-, with metal ions occurring between tetrahedra). The mesodesmic bonds of the silicon tetrahedron allow extensive polymerization and silicates are classified according to the amount of linking that occurs between the, with the presence of minor pigeoniteLow-Ca clinopyroxene, (Ca,Mg,Fe)SiO3, found as a major mineral in eucrites and shergottites. In order to be considered pigeonite, the clinopyroxene must contain 5 to 20 mol % of calcium (Wo5 - 20). Chondrites of petrologic types 4 and below contain significant low-Ca clinopyroxene. During metamorphism to higher temperatures, all existing and augiteHigh-Ca clinopyroxene, (Ca,Mg,Fe)SiO3, that occurs in many igneous rocks, particularly those of basaltic composition. In order to be considered augite, the clinopyroxene must contain 20 to 45 mol % of calcium (Wo20 - 45). An important and unique Martian meteorite is NWA 8159, that has been classified as an augite basalt.. The meteoriteWork in progress. A solid natural object reaching a planet’s surface from interplanetary space. Solid portion of a meteoroid that survives its fall to Earth, or some other body. Meteorites are classified as stony meteorites, iron meteorites, and stony-iron meteorites. These groups are further divided according to their mineralogy and has been shocked to stage S3 and terrestrially weathered to grade W2. The specimen of Dhofar 008 shown above is a 1.3 g thin partial slice showing a darkened portion created by weathering underneath the soil. The photo below shows one of the complete stones in situ. 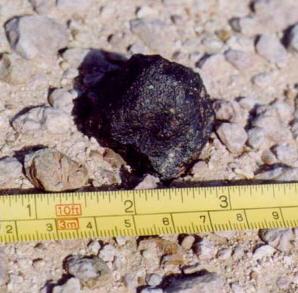