L6–7
(troilite–metalElement that readily forms cations and has metallic bonds; sometimes said to be similar to a cation in a cloud of electrons. The metals are one of the three groups of elements as distinguished by their ionization and bonding properties, along with the metalloids and nonmetals. A diagonal line drawn nodule bearing) 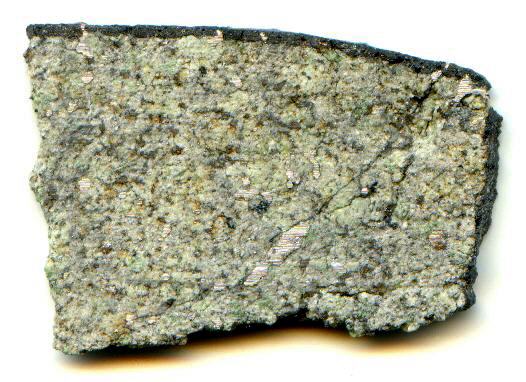 click on photo for a magnified view Fell May 22, 2012
21° 16′ 09′ N., 78° 34′ 49′ E., main massLargest fragment of a meteorite, typically at the time of recovery. Meteorites are commonly cut, sliced or sometimes broken thus reducing the size of the main mass and the resulting largest specimen is called the "largest known mass". In 2012, May 22 at approximately 2:30 P.M., a fireballA fireball is another term for a very bright meteor, generally brighter than magnitude -4, which is about the same magnitude of the planet Venus as seen in the morning or evening sky. A bolide is a special type of fireball which explodes in a bright terminal flash at its end, often with visible fragmentation. accompanied by detonations was seen and heard by local residents as it streaked over the Akola and Nagpur districts of India, moving in a generally eastward direction. At the same time, the Broadband Seismic Observatory of the Geological Survey of India recorded a 2.1 magnitude seismic event lasting 90 seconds, which was centered 30 kms ENE of Akola. Several meteoriteWork in progress. A solid natural object reaching a planet’s surface from interplanetary space. Solid portion of a meteoroid that survives its fall to Earth, or some other body. Meteorites are classified as stony meteorites, iron meteorites, and stony-iron meteorites. These groups are further divided according to their mineralogy and fragments were quickly recovered by residents in and around Katol.