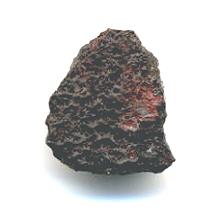 Fell October 9, 1992
41° 17′ N., 73° 55′ W. At 7:48 P.M. a greenish fireballA fireball is another term for a very bright meteor, generally brighter than magnitude -4, which is about the same magnitude of the planet Venus as seen in the morning or evening sky. A bolide is a special type of fireball which explodes in a bright terminal flash at its end, often with visible fragmentation. Click on Term to Read More brighter than the full moon appeared over Kentucky and traveled in a near-grazing trajectory of only 3.4° for more than 700 km in a north–northeasterly direction for at least 40 seconds, finally landing in Peekskill, New York. A sonic boom was heard as it fragmented into over 70 pieces, one of which impacted the trunk of a red Malibu coupe (see photo below) on 207 Wells St., the home of Michelle Knapp. When police arrived on the scene, they filed a report for criminal mischief by a very strong male. The smell of gas from the punctured gas tank finally prompted the fire department to investigate, at which time they found the meteoritic culprit. The stone was impounded by the police and subsequently fractured to see what was inside. This famous meteoriteWork in progress. A solid natural object reaching a planet’s surface from interplanetary space. Solid portion of a meteoroid that survives its fall to Earth, or some other body. Meteorites are classified as stony meteorites, iron meteorites, and stony-iron meteorites. These groups are further divided according to their mineralogy and Click on Term to Read More was eventually returned to the rightful owners. 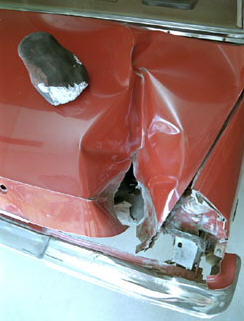