AchondriteAn achondrite is a type of stony meteorite whose precursor was of chondritic origin and experienced metamorphic and igneous processes. They have a planetary or differentiated asteroidal origin where the chondritic parent body reached a sufficient size that through heating due to radioactive decay of 26Al (aluminum isotope) and gravitational Click on Term to Read More, ungroupedModifying term used to describe meteorites that are mineralogically and/or chemically unique and defy classification into the group or sub-group they most closely resemble. Some examples include Ungrouped Achondrite (achondrite-ung), Ungrouped Chondrite (chondrite-ung), Ungrouped Iron (iron-ung), and Ungrouped Carbonaceous (C-ung). Click on Term to Read More
(ureilite-like) 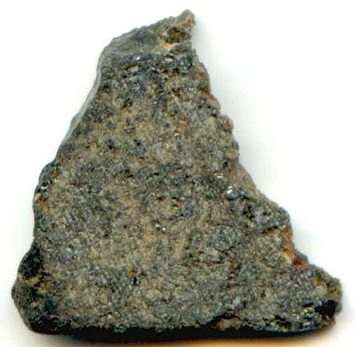 click on photos for a magnified view Purchased 2016
no coordinates recorded A relatively fresh meteoriteWork in progress. A solid natural object reaching a planet’s surface from interplanetary space. Solid portion of a meteoroid that survives its fall to Earth, or some other body. Meteorites are classified as stony meteorites, iron meteorites, and stony-iron meteorites. These groups are further divided according to their mineralogy and Click on Term to Read More weighing 36.67 g was found in Northwest Africa and subsequently purchased by J. Higgins in October 2016 from a dealer in Nouakchott, Mauritania. A sample was analyzed at the University of Washington in Seattle (A. Irving and S. Kuehner) and NWA 11187 was classified as an ungrouped achondrite that has mineralogical and geochemical affinities to the ureilite group.

Northwest Africa 11187 is a coarse-grained achondrite consisting of large poikilitic grains of pigeoniteLow-Ca clinopyroxene, (Ca,Mg,Fe)SiO3, found as a major mineral in eucrites and shergottites. In order to be considered pigeonite, the clinopyroxene must contain 5 to 20 mol % of calcium (Wo5 - 20). Chondrites of petrologic types 4 and below contain significant low-Ca clinopyroxene. During metamorphism to higher temperatures, all existing enclosing small chadacrysts of Cr-poor forsteritic olivineGroup of silicate minerals, (Mg,Fe)2SiO4, with the compositional endpoints of forsterite (Mg2SiO4) and fayalite (Fe2SiO4). Olivine is commonly found in all chondrites within both the matrix and chondrules, achondrites including most primitive achondrites and some evolved achondrites, in pallasites as large yellow-green crystals (brown when terrestrialized), in the silicate portion Click on Term to Read More (Irving and Kuehner, MetBull 106). Neither the Cr-poor olivine nor the poikilitic texture are typical for ureilites, although poikilitic clasts have previously been observed (e.g., polymict ureilite NWA 1926; T.E. Bunch, 2005). GraphiteOpaque form of carbon (C) found in some iron and ordinary chondrites and in ureilite meteorites. Each C atom is bonded to three others in a plane composed of fused hexagonal rings, just like those in aromatic hydrocarbons. The two known forms of graphite, α (hexagonal) and β (rhombohedral), have Click on Term to Read More and kamaciteMore common than taenite, both taenite and kamacite are Ni-Fe alloys found in iron meteorites. Kamacite, α-(Fe,Ni), contains 4-7.5 wt% Ni, and forms large body-centered cubic crystals that appear like broad bands or beam-like structures on the etched surface of a meteorite; its name is derived from the Greek word Click on Term to Read More are present in NWA 11187 as minor constituents. Oxygen-isotope values for NWA 11187 were ascertained at the University of New Mexico (K. Ziegler), and the values plot near the CCAM line near the resolved field for ureilites (see the oxygen three-isotope plot). An in-depth study of multiple samples from the acapulcoite–lodraniteRare type of primitive achondrite named after the Lodran meteorite that fell in Pakistan in 1868. Initially, lodranites were grouped with the stony-iron meteorites because they contain silicates (olivine, orthopyroxene, and minor plagioclase) and Fe-Ni metal in nearly equal proportions. However, since discovery of the closely related acapulcoite group, lodranites Click on Term to Read More clan was conducted by Li et al. (2018), with the ungrouped achondrite NWA 11187 also included in the study. Utilizing a coupled Δ17O vs. ε54Cr (ε54Cr = –0.85 [±0.11]) diagram, they demonstrated that while NWA 11187 does plot among the broad field of the ureilites, it is also close to the compositionally diverse members composing the acapulcoite–lodranite clan (see diagram below). 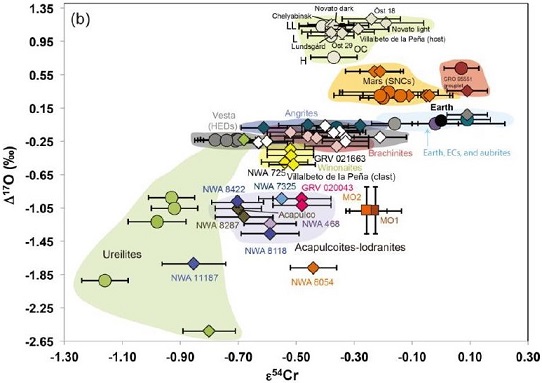 click on image for a magnified view Diagram credit: Li et al., GCA, vol. 242, p. 92 (2018)
‘Evidence for a Multilayered Internal Structure of the Chondritic Acapulcoite–Lodranite Parent Asteroid’
(https://doi.org/10.1016/j.gca.2018.09.004) Northwest Africa 11187 shows evidence for low shock and a low degree of terrestrial weathering. The main massLargest fragment of a meteorite, typically at the time of recovery. Meteorites are commonly cut, sliced or sometimes broken thus reducing the size of the main mass and the resulting largest specimen is called the "largest known mass". Click on Term to Read More of this meteorite resides in the Royal Ontario Museum. The specimen of NWA 11187 shown above is a 0.25 g partial slice that was taken from the ~1 g slice shown below. 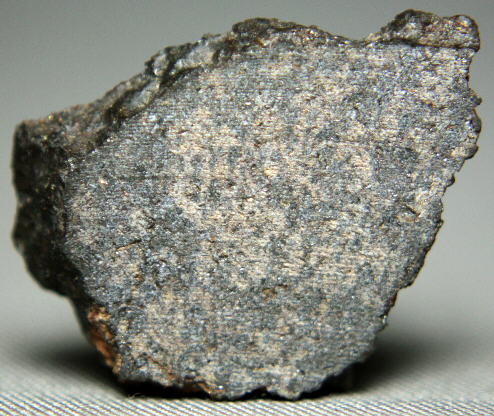