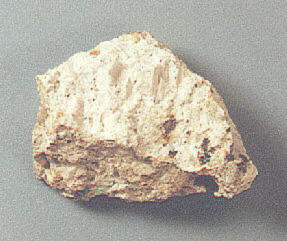 Fell August 2, 1946
30° 7.5′ N., 103° 7.1′ W. After sonic booms and a distinct flight noise were heard, this brecciated aubrite fell into a small natural pond on the Gage Ranch at 1:20 in the afternoon, located 9.5 miles southeast of Marathon, Texas. It was reported (J. Lonsdale, University of Texas in Austin) that twenty-four people observed some aspect of the fallMeteorite seen to fall. Such meteorites are usually collected soon after falling and are not affected by terrestrial weathering (Weathering = 0). Beginning in 2014 (date needs confirmation), the NomComm adopted the use of the terms "probable fall" and "confirmed fall" to provide better insight into the meteorite's history. If of the Peña Blanca (or White Bluff) Spring meteoriteWork in progress. A solid natural object reaching a planet’s surface from interplanetary space. Solid portion of a meteoroid that survives its fall to Earth, or some other body. Meteorites are classified as stony meteorites, iron meteorites, and stony-iron meteorites. These groups are further divided according to their mineralogy and. Two ranch workers who were driving less than 50 feet from the pond heard loud explosions and their truck was suddenly splashed by water and plant debris. A group of grazing horses was frightened away from the pond. The cook at the ranch who was standing on the back porch at the time of the fall became an eyewitness to the meteors plunge into the pond, breaking branches of a willow tree on its way down. At their respective ranch houses which surround the pond, members of the Forker and Catto families were having lunch when they heard the tremendous explosion and impact. Upon seeing the disturbed muddy water in the spring-fed pond, they speculated that a meteorite had hit.

After lowering the water level and searching the pond bottom, fragments having a combined weight of 70.37 kg were recovered. The largest recovered mass of the aubrite, weighing 47.2 kg, was found in the pond about 8 feet from a 2-foot-diameter impact hole. Another large fragment weighing 13 kg was found within 1 foot of the impact hole, while another 444.2 g fragment was found outside the pond. Numerous other pieces having sizes ranging to that of a single grain were recovered. While the recovery was primarily conducted by Oscar Monnig and Harrison Morse, attempts by Oscar Monnig to obtain the largest piece was unsuccessful. This piece was kept by the ranch families until its purchase from the Forker estate by R. Haag in the mid 1980’s.

Current spectral studies link the aubritesAubrites are named for the Aubres meteorite that fell in 1836 near Nyons, France. They are an evolved achondrite that is Ca-poor and composed mainly of enstatite (En100) and diopside (En50Wo50) with minor amounts of olivine (Fa0) and traces of plagioclase (An2-8).  They contain large white crystals of enstatite as to a few near-Earth Apollo asteroids, specifically 3103 Eger and 434 Hungaria (Kelley and Gaffey, 2002). These two high-albedo, iron-free asteroids are composed of an enstatite-like silicateThe most abundant group of minerals in Earth's crust, the structure of silicates are dominated by the silica tetrahedron, SiO44-, with metal ions occurring between tetrahedra). The mesodesmic bonds of the silicon tetrahedron allow extensive polymerization and silicates are classified according to the amount of linking that occurs between the, and are of the appropriate size to make them primary candidates for the aubrite source body. Further evidence has been compiled which is consistent with 3103 Eger being the aubrite source body. For example, the time of day in which aubrites have fallen constrains the orbitThe elliptical path of one body around another, typically the path of a small body around a much larger body. However, depending on the mass distribution of the objects, they may rotate around an empty spot in space • The Moon orbits around the Earth. • The Earth orbits around to one similar to that of Eger. In addition, the long cosmic-ray exposure ageTime interval that a meteoroid was an independent body in space. In other words, the time between when a meteoroid was broken off its parent body and its arrival on Earth as a meteorite - also known simply as the "exposure age." It can be estimated from the observed effects of aubrites is consistent with a stable residence on a near-Earth asteroidAsteroids with orbits that bring them within 1.3 AU (195 million km) of the Sun. NEAs are a dynamically young population whose orbits evolve on 100-million-year time scales because of collisions and gravitational interactions with the Sun and the terrestrial planets. These asteroids are probably ejected from the main belt that has a long-lived orbit, similar to that of Eger. Moreover, the orbital parameters derived for Norton County match those of Eger better than all other orbits. Asteroid 3103 Eger was probably once a member of the Hungaria family of asteroids in the innermost asteroid beltBelt located between 2.12 and 3.3 AU from the Sun and located between the orbits of Mars and Jupiter containing the vast majority of asteroids. The asteroid belt is also termed the main asteroid belt or main belt to distinguish it from other asteroid populations in the Solar System such, which was ejected into an Earth-crossing orbit. Notably, the asteroid 2867 Steins has recently been studied by the Rosetta spacecraft, and it was found to have an albedoRatio of the amount of light reflected by an object and the amount of incident light. Albedo is used as a measure of the reflectivity or intrinsic brightness of an object. A white, perfectly reflecting surface has an albedo of 1.0 while a black perfectly absorbing surface would have an and spectral properties consistent with those of an aubrite (with an abundance of CaS, or oldhamiteMn-Ca sulfide, (Mn,Ca)S, is a pale to dark brown accessory mineral found in minor amounts in highly reduced meteorites such as many enstatite chondrites, and some aubrites and enstatite achondrites. Oldhamite in enstatite chondrites likely formed by solar nebular gas condensation. CaS Oldhamite was also found in the most fresh) (Abell et al., 2008).

In their study of the Hf–W systemDefinable part of the universe that can be open, closed, or isolated. An open system exchanges both matter and energy with its surroundings. A closed system can only exchange energy with its surroundings; it has walls through which heat can pass. An isolated system cannot exchange energy or matter with, Schulz et al. (2010) determined that aubrites fall into two age clusters, probably reflecting impact resetting events, of ~8 and ~20 m.y. after Solar SystemThe Sun and set of objects orbiting around it including planets and their moons and rings, asteroids, comets, and meteoroids. formation. Peña Blanca Spring has a Mn–Cr age (and similar I–Xe age) of 4.563 (±0.003) b.y., which is consistent with that of Khor Temiki (Petitat et al, 2008). It has a cosmic-ray exposure age of 75 (±11) m.y., which, along with LAP 02233 (78 ±12 m.y.), lies just outside of an apparent cluster of several aubrites including Cumberland Falls (49 ±10 m.y.), Bishopville (52 ±3 m.y.), Bustee (52.6 m.y.), Khor Temiki (53.9 m.y.), Y-793592 (55.0 m.y.), and LEW 87007 (58.5 m.y.), which suggests a common ejection event for these meteorites. However, pre-irradiation within the regolithMixture of unconsolidated rocky fragments, soil, dust and other fine granular particles blanketing the surface of a body lacking an atmosphere. Regolith is the product of "gardening" by repeated meteorite impacts, and thermal processes (such as repeated heating and cooling cycles).   of the parent bodyThe body from which a meteorite or meteoroid was derived prior to its ejection. Some parent bodies were destroyed early in the formation of our Solar System, while others like the asteroid 4-Vesta and Mars are still observable today. accounts for a component of these exposure ages, and this raises doubts about the likelihood of their common ejection (Lorenzetti et al., 2003).

Peña Blanca Spring, along with Bustee, contains the lowest concentration of HSE among aubrites (van Acken et al., 2012). It is depleted in Zn and contains the isotopically lightest Zn known so far in the Solar System (Moynier et al., 2010). It is believed that this isotopically light Zn present in aubrites was the result of contamination through condensation of an isotopically light vapor associated with the Zn previously lost by the EL parent body during extended thermal metamorphism. Moynier et al. (2010) contend that the evidence is consistent with the evolution of aubrites from an EL parent body. For additional information on the formation of the aubrite group visit the Mayo Belwa page. The above specimen of Peña Blanca Spring is an 11.9 g fragment composed of large crystals of enstatiteA mineral that is composed of Mg-rich pyroxene, MgSiO3. It is the magnesium endmember of the pyroxene silicate mineral series - enstatite (MgSiO3) to ferrosilite (FeSiO3). with a cataclasticTexture found in metamorphic rocks in which brittle minerals have been broken, crushed, and flattened during shearing. texture.