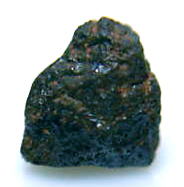 Recognized 1840’s
Bahia Province, Brazil Terrestrial History The name carbonado, meaning burnt or carbonized in Portuguese, was given to this material upon its discovery in Brazil in the 1840’s. This dark gray to black variant of diamondOne of the naturally occurring forms of carbon found in meteorites. Each C atom is bonded through covalent sp3 hydrid orbitals to four others. The strength of the C-C bonds makes diamond the hardest naturally occurring substance (according to the Mohs scale) in terms of resistance to scratching. There are has been mined in the Bahia Province of Brazil since that time. Due to its much greater hardness than typical diamond, it is used industrially for drills and for edges in cutting implements. Carbonado was subsequently found to occur in the same sedimentary geological horizon on a separate continent—in the Ubangui region of the Central African Republic, and has also been reported to occur in Venezuela and the Soviet Union. Carbonado diamond is unique to these limited regions, and it has never been found during any conventional diamond mining and processing operations around the world. The largest recorded carbonado, weighing 3,167 carats (633.4 grams) and named ‘Sergio’, was found in Brazil in 1905. In the ongoing debate to explain the circumstances surrounding the terrestrial occurrence of this unusual diamond, the theory which posits an arrival during a Precambrian (late Archaean) impact event has remained one of the primary contenders. The arrival occurred at a time when the present-day continents of South America and Africa formed a unified supercontinent known as Rodinia. A magnetic anomaly discovered in Central Africa, encompassing an area over 700,000 km², has also been dated to the Precambrian time. This impact feature, the largest known on Earth, might be associated with the delivery of the carbonado diamonds. In a contrary opinion, S. Master (1998) proposed that the Precambrian feature known as the Kogo Structure in Equatorial Guinea (1° 11′ N., 10° 1′ E.), measuring 4.67 km in diameter, would have been situated exactly between the Brazilian and Central African carbonado source locations at the time of its occurrence. He determined that a direct relationship exists between the size of the carbonados and their distance from the Kogo Structure, and suggested that this is the probable impact point from which these diamonds were disseminated. The diagram below presented by Stephen E. Haggerty (2014) shows the only known site of carbonado as it appeared ~1.1 b.y. ago, on the Congo–São Francisco craton (age 3.3–3.7 b.y.; Barbosa and Sabate, 2004). This craton was either part of the Rodinia supercontinent or the pre-Rodinia supercontinent Nuna, the latter of which likely existed between ~1.78 b.y. and ~1.40 b.y. ago (Zhang et al., 2012). The Congo–São Francisco craton, at the time part of Gondwonaland, broke up ~180 m.y. ago into what is now Brazil and the Central African Republic.

Image credit: Stephen E. Haggerty, Earth-Science Reviews, vol. 130, pp. 49–72 (March 2014, open access link)
‘Carbonado: Physical and chemical properties, a critical evaluation of proposed origins, and a revised genetic model’
(https://doi.org/10.1016/j.earscirev.2013.12.008) Physical Characteristics As described by Garai et al. (2006), carbonados are porous (5–15 vol%; Haggerty, 2017), polycrystalline aggregates of sub-µm- to µm-sized, mostly cuboid-shaped diamond crystallites in random orientation. The nodules have a polished surface rind reminiscent of a fusion crustMelted exterior of a meteorite that forms when it passes through Earth’s atmosphere. Friction with the air will raise a meteorite’s surface temperature upwards of  4800 K (8180 °F) and will melt (ablate) the surface minerals and flow backwards over the surface as shown in the Lafayette meteorite photograph below., and it is considered likely that entry- and impact-related processes, including partial ablationGradual removal of the successive surface layers of a material through various processes. • The gradual removal and loss of meteoritic material by heating and vaporization as the meteoroid experiences frictional melting during its passage through the atmosphere. The resulting plasma ablates the meteor and, in cases where a meteor at extremely high temperatures in Earth’s primordial oxygen-poor atmosphere, melted an initially porous texture. Thereafter, secondary mineralization filled the remaining surface pores with silica-based minerals. The interior of carbonado nodules is highly vesiculated, with some pores measuring up to 1 mm in size, and polycyclic aromatic hydrocarbons (PAHs) fill the pores (Kletetschka et al., 2000). In their magnetization studies of carbonado, Kletetschka et al. (2000) found that magnetic carriers are only present at the smooth surface of carbonado nodules and that the nodules are completely non-magnetic throughout the interior. This suggests that the magnetic carriers were not present at the initial site of carbonado formation, but instead were added during the ablation process in Earth’s atmosphere and/or during secondary terrestrial weathering processes. This finding is contrary to what one would findMeteorite not seen to fall, but recovered at some later date. For example, many finds from Antarctica fell 10,000 to 700,000 years ago. given an origin within Earth’s crustOutermost layer of a differentiated planet, asteroid or moon, usually consisting of silicate rock and extending no more than 10s of km from the surface. The term is also applied to icy bodies, in which case it is composed of ices, frozen gases, and accumulated meteoritic material. On Earth, the or mantleMain silicate-rich zone within a planet between the crust and metallic core. The mantle accounts for 82% of Earth's volume and is composed of silicate minerals rich in Mg. The temperature of the mantle can be as high as 3,700 °C. Heat generated in the core causes convection currents in. While the C- and N-isotopic compositions and N abundances of carbonados recovered from Central Africa and Brazil are indistinguishable from each other, they are unlike any known terrestrial-sourced diamond varieties and are inconsistent with either a crustal or mantle origin (Shelkov et al., 1995; A. Pradenas, 2015). These unusual values, such as the isotopically light C content (δ13C ~ –27‰ compared to typical upper mantle values of δ13C ~ –5‰) and the low N abundances, are consistent with an extraterrestrial origin exemplified by Solar SystemThe Sun and set of objects orbiting around it including planets and their moons and rings, asteroids, comets, and meteoroids. material having high contents of organicPertaining to C-containing compounds. Organic compounds can be formed by both biological and non-biological (abiotic) processes. matter (e.g., carbonaceous chondritesChondrites are the most common meteorites accounting for ~84% of falls. Chondrites are comprised mostly of Fe- and Mg-bearing silicate minerals (found in both chondrules and fine grained matrix), reduced Fe/Ni metal (found in various states like large blebs, small grains and/or even chondrule rims), and various refractory inclusions (such, comets). 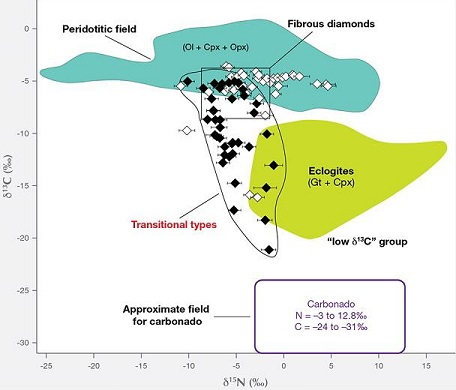