AngriteType of evolved achondrite meteorite that represent some of the earliest stages of asteroidal differentiation and magmatism in our solar system. Angrites are named for the Angra dos Reis meteorite, which fell in Rio de Janeiro, Brazil, in early 1869. They are basaltic (mafic) rocks, often containing porous areas, and
Sub-volcanic/Metamorphic 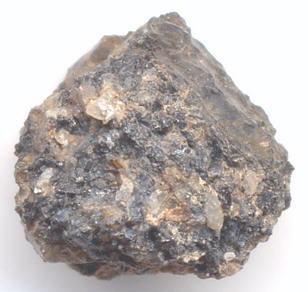 Found June 2006
30° 19.025′ N., 4° 56.573′ W. Numerous fragments with a combined weight of 212.8 g and constituting a single, very fresh, friable, fusion-crusted stone were found 21 km south-southwest of Tamassint oasis and 18 km south of Agoult, Morocco near the Morocco–Algeria border. The fragments were purchased by G. Hupé and an analysis was conducted at the University of Washington in Seattle (A. Irving and S. Kuehner). Northwest Africa 4590 has been determined to be a previously unsampled angriteType of evolved achondrite meteorite that represent some of the earliest stages of asteroidal differentiation and magmatism in our solar system. Angrites are named for the Angra dos Reis meteorite, which fell in Rio de Janeiro, Brazil, in early 1869. They are basaltic (mafic) rocks, often containing porous areas, and type. This classification was verified by an O-isotopic analysis completed at Carnegie Institute in Washington D.C. (D. Rumble III).

Northwest Africa 4590 exhibits textural and mineralogical features that are unique from most other angrites, and it is considered to be neither plutonicGeology: Igneous intrusive body that forms when magma is injected into host rocks and solidifies. Plutons occur in the crust of asteroids undergoing differentiation or planets. Named after Pluto, the Roman god of the underworld. Plutonic rocks are the rocks found within a pluton. Astronomy: Category of planet including all/metamorphic nor basaltic/quenched (McKibbin et al., 2015). Instead, it is more similar to the LEW 86010 angrite, with mineralogical features (e.g., chemically zoned pyroxenes, exsolutionSegregation, during cooling, of a homogeneous solid solution into two or more different solids. lamellae in olivineGroup of silicate minerals, (Mg,Fe)2SiO4, with the compositional endpoints of forsterite (Mg2SiO4) and fayalite (Fe2SiO4). Olivine is commonly found in all chondrites within both the matrix and chondrules, achondrites including most primitive achondrites and some evolved achondrites, in pallasites as large yellow-green crystals (brown when terrestrialized), in the silicate portion) indicative of relatively fast cooling over a period of a few thousand years at a depth of ~240 m; a lithology formed in such an environment is more appropriately termed sub-volcanic rather than plutonic. By comparison, it was ascertained that LEW 86010 is also a sub-volcanic angrite, cooling over a period of ~10–250 years at a depth of <100 m (McKay et al., 1998). Northwest Africa 4590 is a coarse-grained, cumulateIgneous rock composed of crystals that have grown and accumulated (often by gravitational settling) in a cooling magma chamber. rock composed of zoned, purple-brown, Al–Ti-rich clinopyroxene (33%), white intercumulus anorthiteRare compositional variety of plagioclase and the calcium end-member of the plagioclase feldspar mineral series with the formula CaAl2Si2O8. Anorthite is found in mafic igneous rocks such as anorthosite. Anorthite is abundant on the Moon and in lunar meteorites. However, anorthite is very rare on Earth since it weathers rapidly (28%), yellow-green Ca-rich olivine (14%), kirschsteinite (5%), and black ulvöspinelMg-Al oxide, MgAl2O4, found in CAIs. (18%), along with minor merrillite and Cl-bearing Ca silico-phosphate (now resolved to be silico-apatite; Mikouchi et al., 2011). In addition, troiliteBrass colored non-magnetic mineral of iron sulfide, FeS, found in a variety of meteorites. is present typically associated with FeNi-metal and small oxide grains (Riches et al., 2016). Glass having a compositional range between anorthite and ulvöspinel is present at the grain boundaries, and it incorporates re-precipitated primary minerals. This glass is thought to have formed by a rapid melting and cooling process, perhaps during a late impact event, or possibly through a decompression event such as that occurring from the collisional stripping of the lithosphereRigid outer layer of a planet. The base of the lithopshere is defined by the temperature at which the brittle/ductile transition occurs in the mantle. on a large planetThe term "planet" originally comes from the Greek word for "wanderer" since these objects were seen to move in the sky independently from the background of fixed stars that moved together through the seasons. The IAU last defined the term planet in 2006, however the new definition has remained controversial.. This event might be recorded in NWA 4590 and two other angrites as a disturbance of the Mn–Cr and U–Pb chronometers at ~4.5572 b.y. (McKibbin et al., 2015). Timescales for Angrites 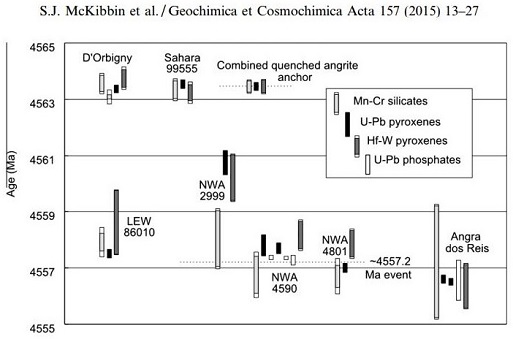 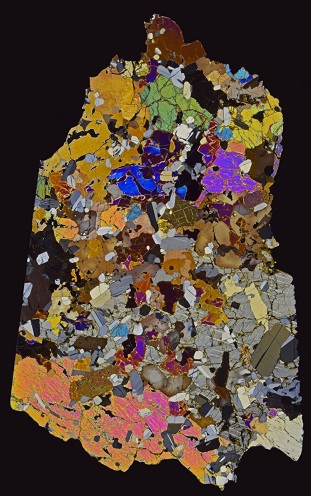