perhaps the freshly fallen meteoriteWork in progress. A solid natural object reaching a planet’s surface from interplanetary space. Solid portion of a meteoroid that survives its fall to Earth, or some other body. Meteorites are classified as stony meteorites, iron meteorites, and stony-iron meteorites. These groups are further divided according to their mineralogy and smelled good, or perhaps because it was shaped like a loaf of bread, which some ureilite are. However, not all of the stones were eaten, and Novo Urei became the type specimen of one of the best-represented achondriteAn achondrite is a type of stony meteorite whose precursor was of chondritic origin and experienced metamorphic and igneous processes. They have a planetary or differentiated asteroidal origin where the chondritic parent body reached a sufficient size that through heating due to radioactive decay of 26Al (aluminum isotope) and gravitational groups. 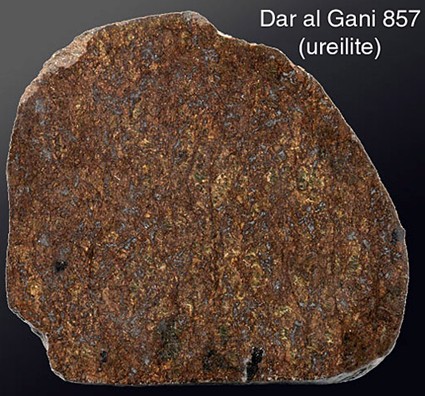 There are two subgroups of ureilite. Main group ureilites are composed mainly of coarse-grained olivineGroup of silicate minerals, (Mg,Fe)2SiO4, with the compositional endpoints of forsterite (Mg2SiO4) and fayalite (Fe2SiO4). Olivine is commonly found in all chondrites within both the matrix and chondrules, achondrites including most primitive achondrites and some evolved achondrites, in pallasites as large yellow-green crystals (brown when terrestrialized), in the silicate portion (Fa5-25), pigeoniteLow-Ca clinopyroxene, (Ca,Mg,Fe)SiO3, found as a major mineral in eucrites and shergottites. In order to be considered pigeonite, the clinopyroxene must contain 5 to 20 mol % of calcium (Wo5 - 20). Chondrites of petrologic types 4 and below contain significant low-Ca clinopyroxene. During metamorphism to higher temperatures, all existing (En75Wo15) and orthopyroxeneOrthorhombic, low-Ca pyroxene common in chondrites. Its compositional range runs from all Mg-rich enstatite, MgSiO3 to Fe-rich ferrosilite, FeSiO3. These end-members form an almost complete solid solution where Mg2+ substitutes for Fe2+ up to about 90 mol. % and Ca substitutes no more than ~5 mol. % (higher Ca2+ contents occur (En80-90), set in a dark carbonaceous matrixFine grained primary and silicate-rich material in chondrites that surrounds chondrules, refractory inclusions (like CAIs), breccia clasts and other constituents. of graphiteOpaque form of carbon (C) found in some iron and ordinary chondrites and in ureilite meteorites. Each C atom is bonded to three others in a plane composed of fused hexagonal rings, just like those in aromatic hydrocarbons. The two known forms of graphite, α (hexagonal) and β (rhombohedral), have and diamondOne of the naturally occurring forms of carbon found in meteorites. Each C atom is bonded through covalent sp3 hydrid orbitals to four others. The strength of the C-C bonds makes diamond the hardest naturally occurring substance (according to the Mohs scale) in terms of resistance to scratching. There are, Ni-Fe metalElement that readily forms cations and has metallic bonds; sometimes said to be similar to a cation in a cloud of electrons. The metals are one of the three groups of elements as distinguished by their ionization and bonding properties, along with the metalloids and nonmetals. A diagonal line drawn, and troiliteBrass colored non-magnetic mineral of iron sulfide, FeS, found in a variety of meteorites.. Polymict ureilites consist of a mixture of different lithologies. Besides clasts from main group ureilites, they contain magmatic inclusions, dark carbonaceous clasts, chondritic fragments of different origins, and various other inclusions. This suggests a surface or regolithMixture of unconsolidated rocky fragments, soil, dust and other fine granular particles blanketing the surface of a body lacking an atmosphere. Regolith is the product of "gardening" by repeated meteorite impacts, and thermal processes (such as repeated heating and cooling cycles).   origin for the polymict ureilites, an assumption supported by the values for noble gasesElement occurring in the right-most column of the periodic table; also called "inert" gases. In these gases, the outer electron shell is completely filled, making them very unreactive. that have been implanted into the regolith by the solar windSupersonic flow of high-speed charged particles continuously blowing off a star (mostly e- and p+). When originating from stars other than the Sun, it is sometimes called a "stellar" wind. The solar wind may be viewed as an extension of the corona into interplanetary space. The solar wind emanates radially. However, both the origin and the formation history of the ureilites remain
enigmatic. Their mineralInorganic substance that is (1) naturally occurring (but does not have a biologic or man-made origin) and formed by physical (not biological) forces with a (2) defined chemical composition of limited variation, has a (3) distinctive set of of physical properties including being a solid, and has a (4) homogeneous and oxygenElement that makes up 20.95 vol. % of the Earth's atmosphere at ground level, 89 wt. % of seawater and 46.6 wt. % (94 vol. %) of Earth's crust. It appears to be the third most abundant element in the universe (after H and He), but has an abundance only isotopic compositions suggest that they are residues of partial meltingAn igneous process whereby rocks melt and the resulting magma is comprised of the remaining partially melted rock (sometimes called restite) and a liquid whose composition differs from the original rock. Partial melting occurs because nearly all rocks are made up of different minerals, each of which has a different melting, and therefore represent primitive achondrites that probably formed on several parent bodies. On the other hand, REEOften abbreviated as “REE”, these 16 elements include (preceded by their atomic numbers): 21 scandium (Sc), 39 Yttrium (Y) and the 14 elements that comprise the lanthanides excluding 61 Promethium, an extremely rare and radioactive element. These elements show closely related geochemical behaviors associated with their filled 4f atomic orbital. patterns and other chemical characteristics indicate that ureilites are highly fractionated igneous rocks that formed in different regions of the same parent bodyThe body from which a meteorite or meteoroid was derived prior to its ejection. Some parent bodies were destroyed early in the formation of our Solar System, while others like the asteroid 4-Vesta and Mars are still observable today.; probably a moderately differentiated C-class asteroid that was disrupted by an impact event and then rapidly cooled. An impact history would also explain the occurrence of high-pressure minerals such as diamond and londsdaleite that are formed by intense shock metamorphismMetamorphism produced by hypervelocity impact between objects of substantial size moving at cosmic velocity (at least several kilometers per second). Kinetic energy is converted into seismic and heat energy almost instantaneously, yielding pressures and temperatures far in excess those in normal terrestrial metamorphism. On planetary bodies with no atmosphere, smaller. Even this theory isn’t without its problems though. Recently, a ureilite from the Libyan Sahara, named DaG 868, was found to contain diamonds, but paradoxically, appears to be nearly unshocked.