Production of 12C by fusionProcess in which two lighter atomic nuclei combine to form a heavier atomic nucleus. Very high temperatures are normally required in order for atomic nuclei to collide with sufficient energy to overcome the Coulomb barrier (their mutual electrostatic repulsions). Fusion that occurs under high-temperature conditions is called thermonuclear fusion. Fusion of 3 4He nuclei (α particles). HeliumHelium (He) Second lightest and second most abundant element (after Hydrogen) in the universe. The most abundant isotope is 4He (99.9998%), 3He is very rare. Helium comprises ~8% of the atoms (25% of the mass) of all directly observed matter in the universe. Helium is produced by hydrogen burning inside produced in hydrogen burningProcesses by which hydrogen (1H) is fused into helium (4He) with in a star. The five possible fusion paths can be divided into two sets of processes: the Proton-Proton (PP) process, which depends only on the amount of H and He in the star, and the CNO cycle (carbon-nitrogen-oxygen), which cannot undergo fusion reactions because of a stability bottleneck. The two most likely reactions for 4He fusion are:

However, both products are unstable, and decay before they can undergo any further reactions. Only at extremely high temperatures (~108 K), can this stability bottleneck be circumvented by a highly improbable reaction. At these temperatures, 8Be (t½ = 0.067 seconds) is formed at a high enough rate that there is always a very small equilibriumTerm used to describe physical or chemical stasis. Physical equilibrium may be divided into two types: static and dynamic. Static equilibrium occurs when the components of forces and torques acting in one direction are balanced by components of forces and torques acting in the opposite direction. A system in static concentration at any one instant. This small concentration of 8Be fuses with 4He yielding an excited stateAny energy state of an atom, or of a solid, above its ground state. For atoms and solids, excited states refers to energy levels of electrons higher than the ground-state energy. Excited states are not indefinitely stable, so the atom will eventually return to its ground state. of 12C (indicated as 12C*) that is also unstable. However, a few 12C* emit a γ-ray
quickly enough to become stable before disintegrating. This extremely improbable sequence is called the "triple-alpha process" because the net reaction is:

The triple-alpha process does not occur in main sequence stars like the SunOur parent star. The structure of Sun's interior is the result of the hydrostatic equilibrium between gravity and the pressure of the gas. The interior consists of three shells: the core, radiative region, and convective region. Image source: http://eclipse99.nasa.gov/pages/SunActiv.html. The core is the hot, dense central region in which the because their central temperatures are too low. However, in the red giantGiant and highly luminous red star in the later stages of stellar evolution after it has left the main sequence. These red stars have a relatively cool surface whose core has burned most of its hydrogen. Red giants lose parts of their atmospheres and thus provide new elements into interstellar phase, after many main sequence stars have consumed their H fuel, central temperatures rise high enough to initiate the triple-alpha process. (Further helium captureFormation of heavy elements by the capture of helium nuclei. For example, at ~6 x 108 K, carbon can form heavier elements by fusion with other carbon nuclei: However, fusion is more likely to occur by helium capture, which requires less energy and lower temperatures (~2 x 108 K): Similarly, reactions then convert some C into O.) Thus, much of the energy for red giants comes from fusion of He into C. Helium burningThe triple alpha process. This is the main source of energy production in red giants and red supergiants. stars occupy a region of the Hertzsprung-Russell diagram known as the horizontal branch. 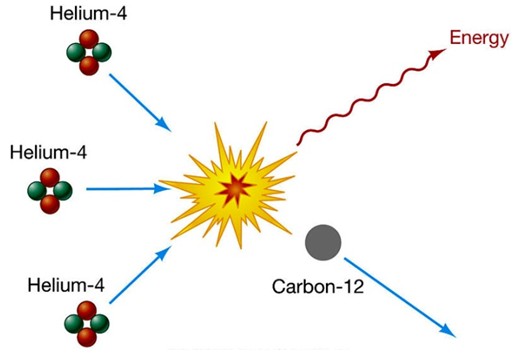