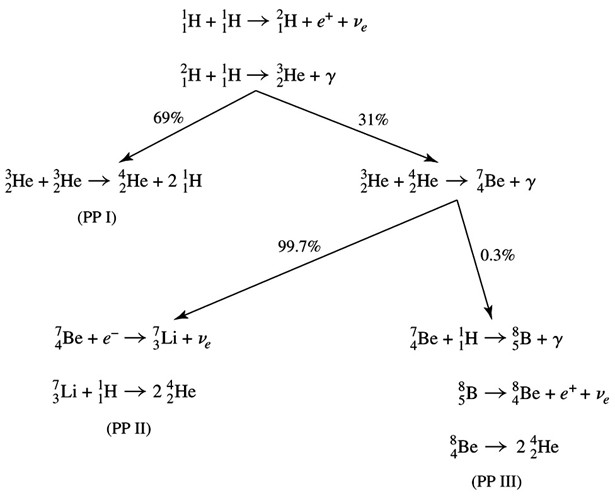 Processes by which hydrogenLightest and most common element in the universe (~92% by atoms; ~75% by mass). Hydrogen's isotopes are: • 1H (99.9885 %)
• 2H (0.0115 %), also called deuterium.
• 3H, also called Tritium, is a radioactive (t½ = 12.32 y) by-product of atmospheric thermonuclear tests in Earth's hydrosphere and atmosphere.
(1H) is fused into heliumHelium (He) Second lightest and second most abundant element (after Hydrogen) in the universe. The most abundant isotope is 4He (99.9998%), 3He is very rare. Helium comprises ~8% of the atoms (25% of the mass) of all directly observed matter in the universe. Helium is produced by hydrogen burning inside (4He) with in a starSelf-luminous object held together by its own self-gravity. Often refers to those objects which generate energy from nuclear reactions occurring at their cores, but may also be applied to stellar remnants such as neutron stars.. The five possible fusionProcess in which two lighter atomic nuclei combine to form a heavier atomic nucleus. Very high temperatures are normally required in order for atomic nuclei to collide with sufficient energy to overcome the Coulomb barrier (their mutual electrostatic repulsions). Fusion that occurs under high-temperature conditions is called thermonuclear fusion. Fusion paths can be divided into two sets of processes: the Proton-Proton (PP) process, which depends only on the amount of H and He in the star, and the CNO cycleFusion process in stars contaminated by "metals," specifically carbon (C), nitrogen (N), and oxygen (O). The two branches of the CNO process cycle through a sequence that converts the elements carbon, nitrogen, and oxygen into each other's isotopes. The first cycle (shown) starts and ends with 12C, which may be (carbon-nitrogen-oxygen), which depends on the amount of these elements in addition to the amount of H and He in the star. There are three branches to the PP process of converting hydrogen (1H) into helium (4He). The first branch does the conversion without creating any nuclei heavier than He. The remaining two branches go through a step that creates Be. The coreIn the context of planetary formation, the core is the central region of a large differentiated asteroid, planet or moon and made up of denser materials than the surrounding mantle and crust. For example, the cores of the Earth, the terrestrial planets and differentiated asteroids are rich in metallic iron-nickel. temperature determines which of these branches is dominant. The first PP process branch (shown) dominates in the production of He for core temperatures below roughly 15 million degrees (1.3 keV).The other two PP processes occur at higher core temperatures (15–25+ million degrees).

The core temperature of a star rises with its mass, so the PP process dominates at low masses, and the CNO cycle dominates at high masses. For main-sequence stars with elemental abundances similar to the SunOur parent star. The structure of Sun's interior is the result of the hydrostatic equilibrium between gravity and the pressure of the gas. The interior consists of three shells: the core, radiative region, and convective region. Image source: http://eclipse99.nasa.gov/pages/SunActiv.html. The core is the hot, dense central region in which the, the conversion of H into He is equal for the two processes when a star is ~2 Msun. Below ~1.2 Msun, the contribution to the energy production from the CNO cycle is insignificant; this means that the Sun is powered only by the PP process. Above ~3 Msun, virtually all of the energy generated in a star comes from the CNO cycle. The minimum mass of a star is ~0.075 Msun. Below this mass, the core temperature never rises high enough for hydrogen fusion to begin.