Type of attractive intermolecular force that exists between two partial electric charges of opposite polarity. Although stronger than most other intermolecular forces, the typical hydrogenLightest and most common element in the universe (~92% by atoms; ~75% by mass). Hydrogen's isotopes are: • 1H (99.9885 %)
• 2H (0.0115 %), also called deuterium.
• 3H, also called Tritium, is a radioactive (t½ = 12.32 y) by-product of atmospheric thermonuclear tests in Earth's hydrosphere and atmosphere.
bond is much weaker than both the ionic bond and the covalent bondInteraction between atoms by which they "share" valence electrons in the outermost energy shells, thereby filling the outer shell of both atoms involved in the interaction. This occurs between atoms with similar high electronegativities (ΔX~0), resulting in highly localized bonding orbitals. For example, each hydrogen atom in a hydrogen gas. When H bonds with a strongly electronegative elementSubstance composed of atoms, each of which has the same atomic number (Z) and chemical properties. The chemical properties of an element are determined by the arrangement of the electrons in the various shells (specified by their quantum number) that surround the nucleus. In a neutral atom, the number of (such as O) the electronegative element attracts the electron cloud from around the hydrogen nucleusCore of an atom, where nearly the entire mass and all positive charge is concentrated. It consists of protons and neutrons. and, by decentralizing the cloud, leaves the atom with a positive partial charge. The resulting charge, though only partial, nevertheless represents a large positive charge densityMass of an object divided by its volume. Density is a characteristic property of a substance (rock vs. ice, e.g.). Some substances (like gases) are easily compressible and have different densities depending on how much pressure is exerted upon them. The Sun is composed of compressible gases and is much that is attracted to sites of negative charge. The hydrogen bond is not a simple attraction between point charges, but possesses some degree of orientation preference. Consequently, it has some of the characteristics of a covalent bond. This covalency tends to be more extreme when acceptors bind H from more electronegative donors.

Hydrogen bonds form the crystal structureMutual arrangement of atoms, molecules or ions that are packed together in a crystal lattice to form a crystal. of ice, bond layers in some phyllosilicatesClass of hydroxyl-bearing silicate minerals with a sheet-like structure. They result from aqueous alteration are dominantly serpentine and smectite in meteorites; found in the matrixes of carbonaceous chondrites. Phyllosilicates consist of repeating sequences of sheets of linked tetrahedra (T) and sheets of linked octahedra (O). The T sheet consists of, connect the two strands of deoxyribonucleic acid (DNA) by joining attached amino acids (below), and play a major role in the folding of proteins. 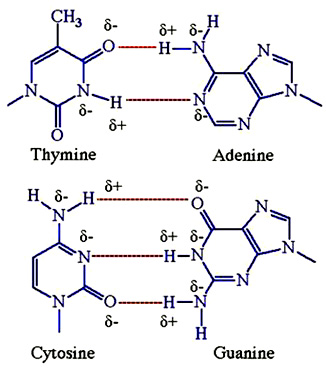