PallasiteOne of two main classes of stony-iron meteorite, the other being mesosiderites. Pallasites are igneous in nature and characterized by crystals of olivine, sometimes peridot (green gem quality clear olivine crystals), embedded in a matrix of Fe-Ni metal. The type specimen, weighing 680 kg, was found in the mountains near, MG (main-group), anomalous metalElement that readily forms cations and has metallic bonds; sometimes said to be similar to a cation in a cloud of electrons. The metals are one of the three groups of elements as distinguished by their ionization and bonding properties, along with the metalloids and nonmetals. A diagonal line drawn composition
low-Δ17O subgroup (see details on the Imilac page) 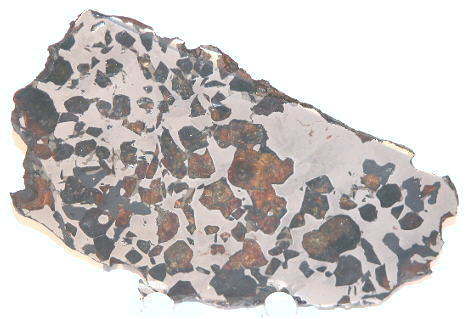 Found June 1967
62° 54′ N., 152° 26′ E. As reported by Mednikov (1967), Zvetkov (1967), and Tsvetkov (1969), a large mass was found in a stream bed of the Yasachnaya River (flowing into the river of Hekandue, a left tributary of the river of Jasachnaja) by a geologist, F. A. Mednikov, about 150 km from Seymchan, in the Magadan Region of the USSR (V. Buchwald, 1975). The thumbprinted, triangular-shaped mass weighed 272.3 kg. In October of that year, a further search of the area by I. H. Markov, utilizing a mine detectorAny device used to sense the passage of a particle or photon (x-ray, γ-ray, etc.). X-rays can be detected using sealed-gas proportional, gas-flow proportional detectors, and Li-drifted Si semiconductor detectors. A Li-drifted Ge detector is used to count γ-rays in the laboratory., resulted in the recovery of an additional mass weighing 51 kg. The large mass was provided to the Academy of Sciences, USSR.

A small section of the iron was analyzed by J. Wasson (1974) and it was determined to be a member of chemical group IIE. Subsequently, a more precise elemental analysis of the IIE iron group members by J. Wasson and J. Wang (1986) found that Seymchan (and another IIE member, Lonaconing) had many elemental trends that deviated strongly from typical IIE group members, and therefore, Seymchan (and Lonaconing) was reclassified as an ungroupedModifying term used to describe meteorites that are mineralogically and/or chemically unique and defy classification into the group or sub-group they most closely resemble. Some examples include Ungrouped Achondrite (achondrite-ung), Ungrouped Chondrite (chondrite-ung), Ungrouped Iron (iron-ung), and Ungrouped Carbonaceous (C-ung). iron. During a 2004 expedition to the original Seymchan discovery site, D. Kachalin found additional masses having a combined weight of ~50 kg. Remarkably, many of the new masses (~20%) were found to contain silicates with a pallasitic texture, something not discovered previously during studies of only small sections of the original mass. This heterogeneous mixture, including portions composed of only FeNi-metal and portions containing silicates in a pallasitic texture, is similar to the iron–pallasite mixtures found previously in both the Brenham and the Glorieta Mountain pallasites. With knowledge of the existence of a pallasitic structure in Seymchan, and of its identical chemical composition to the original Seymchan iron masses, an O-isotopic analysis was conducted; the values plot within the field of the main-group pallasites. Notwithstanding its similar chemical composition to that of the main-group members, Seymchan is an anomalous pallasite due to its high Ir content (van Niekerk et al., 2007). Previous O-isotopic analyses for main-group pallasites and the HED meteorites indicated that these two groups have values that are very similar. In a high precision comparative analysis of the oxygenElement that makes up 20.95 vol. % of the Earth's atmosphere at ground level, 89 wt. % of seawater and 46.6 wt. % (94 vol. %) of Earth's crust. It appears to be the third most abundant element in the universe (after H and He), but has an abundance only three-isotope composition between olivines from five main-group pallasites and representative HED samples, including eucriteMost common type of achondrite meteorite and a member of the HED group. Eucrites are basalts composed primarily of pigeonite and anorthite (An60-98). Eucrites have been placed into three subgroups based on mineralogical and chemical differences. • Non-cumulate eucrites represent the upper crust that solidified on a magma ocean after and diogeniteDiogenites belong to the evolved achondrite HED group that also includes howardites and eucrites. They are named after the Greek philosopher Diogenes of Apollonia, of the 5th century BCE, who was the first to suggest that meteorites come from outer space (a realization forgotten for over 2,000 years). They are material, Jabeen et al. (2013) determined that a clear distinction exists, thus demonstrating that these meteoriteWork in progress. A solid natural object reaching a planet’s surface from interplanetary space. Solid portion of a meteoroid that survives its fall to Earth, or some other body. Meteorites are classified as stony meteorites, iron meteorites, and stony-iron meteorites. These groups are further divided according to their mineralogy and groups originated on separate parent bodies. In another study investigating the close O-isotopic relationship between main-group pallasites, mesosiderites, and the HED clan, Ziegler and Young (2007) discovered that non-homogenized samples of main-group pallasite olivines exhibit a bimodality in 17O values, which also distinguishes their origin from that of the mesosiderites and the HED clan. In their follow-up of this report, a more refined O-isotopic analysis was conducted by Greenwood et al. (2008), but their results did not support a bimodality in 17O values; however, they definitively established that the parental source of main-group pallasites was different from that of mesosiderites and the HED clan. More recently, Ali et al. (2018) employed improved laser fluorination techniques to increase the precision of triple oxygen isotopeOne of two or more atoms with the same atomic number (Z), but different mass (A). For example, hydrogen has three isotopes: 1H, 2H (deuterium), and 3H (tritium). Different isotopes of a given element have different numbers of neutrons in the nucleus. data for 25 MG pallasites and selected members of the HED group. Their results, together with geochemical and other data, not only demonstrate that the HEDs are not genetically related to the main-group pallasites, but also that a significant bimodality exists for these pallasites based on several factors: Δ17O values, MgO content in olivines, bulk olivineGroup of silicate minerals, (Mg,Fe)2SiO4, with the compositional endpoints of forsterite (Mg2SiO4) and fayalite (Fe2SiO4). Olivine is commonly found in all chondrites within both the matrix and chondrules, achondrites including most primitive achondrites and some evolved achondrites, in pallasites as large yellow-green crystals (brown when terrestrialized), in the silicate portion abundance, concentration densityMass of an object divided by its volume. Density is a characteristic property of a substance (rock vs. ice, e.g.). Some substances (like gases) are easily compressible and have different densities depending on how much pressure is exerted upon them. The Sun is composed of compressible gases and is much of olivine grains, and paleointensity. They clearly demonstrated that two statistically distinct subgroups are resolved, and that these subgroups likely represent at least two asteroidal parent bodies with each having homogeneous olivine compositions.

Diagram credit: Ali et al., MAPS, vol. 53, #6, p. 1228 (2018)
‘The oxygen isotope compositions of olivine in main group (MG) pallasites: New measurements by adopting an improved laser fluorination approach’
(https://doi.org/10.1111/maps.13072) The specimen shown above is a 91 g slice of the Seymchan pallasite exhibiting abundant silicates in an FeNi-metal matrixFine grained primary and silicate-rich material in chondrites that surrounds chondrules, refractory inclusions (like CAIs), breccia clasts and other constituents.. The top photo below shows a 35 kg Seymchan individual, while the bottom photo shows a section of an exquisitely solidified crystal mush.