MesosideriteOne of two main types of stony-iron meteorite, the other being pallasites. Mesosiderites are a mixture of approximately 50% basaltic, gabbroic and orthopyroxenitic silicates and 50% Ni-Fe metal and sulfides. The name derives from the Greek "mesos" meaning "middle" or "half" and "sideros" for "iron;" hence "half-iron". The silicates are, group 2C 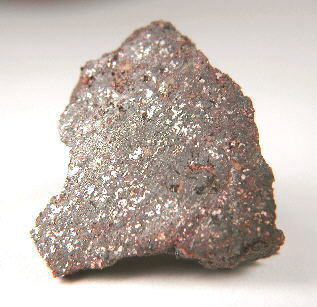 Purchased June 2002
no coordinates recorded A complete, fusion-crusted, stony-iron meteoriteMeteorite composed of roughly equal amounts by weight of silicate minerals and Ni-Fe metal. The stony-irons consist of two groups: mesosiderites and pallasites. However, there is gradual shading into metal-rich stony meteorites such as the lodranites (once considered stony-irons) and silicate-rich iron meteorites. Stony-iron meteorites are less abundant than their, weighing 877 g, was purchased in Risani, Morocco on behalf of an American collector. A polished thin sectionThin slice or rock, usually 30 µm thick. Thin sections are used to study rocks with a petrographic microscope. from NWA 1827 was prepared for analysis at the Department of Earth and Space Sciences, University of Washington (A. Irving and S. Kuehner). Optical petrography, energy dispersive electron microprobeInstrument that analyzes the chemistry of very small spots by bombarding the sample with a focused electron beam and measuring the X-rays produced. The amount and energy of the x-rays indicate the chemical composition of the sample. The electron microprobe is an important tool used in determining the composition of analyses, and quantitative microprobe analyses were utilized in the initial analysis of this meteoriteWork in progress. A solid natural object reaching a planet’s surface from interplanetary space. Solid portion of a meteoroid that survives its fall to Earth, or some other body. Meteorites are classified as stony meteorites, iron meteorites, and stony-iron meteorites. These groups are further divided according to their mineralogy and. Comparative studies of NWA 1827 with NWA 1879 and other independently owned masses (NWA 1882, 1912, 1951, 1982, 3055, and 1645) show that close similarities exist among them, and all of these masses, totaling at least 26.4 kg, are presumed to be paired (Bunch et al., 2004). Continued research was conducted by the Bunch et al. (2014) on these specimens and a large number of mesosiderite samples previously considered to represent a separate fallMeteorite seen to fall. Such meteorites are usually collected soon after falling and are not affected by terrestrial weathering (Weathering = 0). Beginning in 2014 (date needs confirmation), the NomComm adopted the use of the terms "probable fall" and "confirmed fall" to provide better insight into the meteorite's history. If. It was eventually determined that all of these mesosiderites represent a single strewn fieldArea on the surface containing meteorites and fragments from a single fall. Also applied to the area covered by tektites, which are produced by large meteorite impacts. Strewnfields are often oval-shaped with the largest specimens found at one end. Given that the largest specimens go the greatest distance, a meteoroid's (totaling at least 80 kg) comprising mesosiderites of differing subgroups (see also NWA 1878).