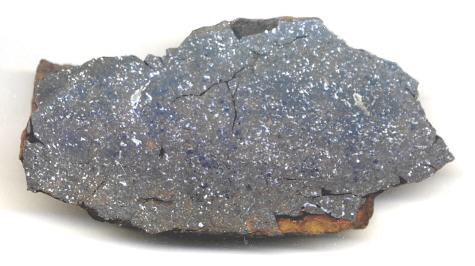 Found 1923, the craterBowl-like depression ("crater" means "cup" in Latin) on the surface of a planet, moon, or asteroid. Craters range in size from a few centimeters to over 1,000 km across, and are mostly caused by impact or by volcanic activity, though some are due to cryovolcanism. known since 1920
27° 38′ S., 117° 17′ E. Approximately 12.2 kg of mesosideriteOne of two main types of stony-iron meteorite, the other being pallasites. Mesosiderites are a mixture of approximately 50% basaltic, gabbroic and orthopyroxenitic silicates and 50% Ni-Fe metal and sulfides. The name derives from the Greek "mesos" meaning "middle" or "half" and "sideros" for "iron;" hence "half-iron". The silicates are fragments, comprising both oxidizedOxidation and reduction together are called redox (reduction and oxidation) and generally characterized by the transfer of electrons between chemical species, like molecules, atoms or ions, where one species undergoes oxidation, a loss of electrons,  while another species undergoes reduction, a gain of electrons. This transfer of electrons between reactants and unoxidized material, have been found in and around a small impact craterCrater formed by high-speed impact of a meteoroid, asteroid, or comet on a solid surface. Craters are a common feature on most moons (an exception is Io), asteroids, and rocky planets, and range in size from a few cm to over 1,000 km across. There is a general morphological progression in Western Australia. A high abundance of sub-mm-sized fragmentation particles, calculated to weigh 40 kg, were found by Smith and Hodge (1996) during their studies of soil from the crater site. Dalgaranga is the only crater known to have been created by a mesosiderite, and is the smallest known crater in Australia, measuring 70 feet across and 11 feet deep. Because the eastern side of the crater is higher than the western side, it is believed that the impactor approached from the west. This is a relatively recent impact event estimated by some to be ~270,000 years old. Dalgaranga contains a high abundance of plagioclaseAlso referred to as the plagioclase feldspar series. Plagioclase is a common rock-forming series of feldspar minerals containing a continuous solid solution of calcium and sodium: (Na1-x,Cax)(Alx+1,Si1-x)Si2O8 where x = 0 to 1. The Ca-rich end-member is called anorthite (pure anorthite has formula: CaAl2Si2O8) and the Na-rich end-member is albite consistent with the mesosiderite petrologic class A, but no metamorphicRocks that have recrystallized in a solid state due to changes in temperature, pressure, and chemical environment. grade (1–4) has been assigned.

The formation of mesosiderites on their parent bodyThe body from which a meteorite or meteoroid was derived prior to its ejection. Some parent bodies were destroyed early in the formation of our Solar System, while others like the asteroid 4-Vesta and Mars are still observable today. has been explained by several theories. A recent model based on smoothed-particle hydrodynamicsStudy of fluid in motion. calls for the disruption and re-accretion of a 200–400 km differentiated asteroid with a molten coreIn the context of planetary formation, the core is the central region of a large differentiated asteroid, planet or moon and made up of denser materials than the surrounding mantle and crust. For example, the cores of the Earth, the terrestrial planets and differentiated asteroids are rich in metallic iron-nickel.. The impactor is calculated to have been a 50–150 km body with an impact speed of 5 km/s. This event initially caused rapid cooling (~0.1°C/y.) from thermal equilibration, followed by very slow cooling (~0.5°C/m.y.) as the brecciated material was deeply covered by a massive debris blanket. The Ar–Ar ages of mesosiderites of 3.7–4.1 b.y. reflect this very slow cooling. Weakly shocked olivineGroup of silicate minerals, (Mg,Fe)2SiO4, with the compositional endpoints of forsterite (Mg2SiO4) and fayalite (Fe2SiO4). Olivine is commonly found in all chondrites within both the matrix and chondrules, achondrites including most primitive achondrites and some evolved achondrites, in pallasites as large yellow-green crystals (brown when terrestrialized), in the silicate portion was sequestered into the core at the time of the catastrophic impact, as molten metalElement that readily forms cations and has metallic bonds; sometimes said to be similar to a cation in a cloud of electrons. The metals are one of the three groups of elements as distinguished by their ionization and bonding properties, along with the metalloids and nonmetals. A diagonal line drawn was mixed with crustal fragments during re-accretion. A more conventional theory calls for the accretionAccumulation of smaller objects into progressively larger bodies in the solar nebula leading to the eventual formation of asteroids, planetesimals and planets. The earliest accretion of the smallest particles was due to Van der Waals and electromagnetic forces. Further accretion continued by relatively low-velocity collisions of smaller bodies in the, melting, and crystallizationPhysical or chemical process or action that results in the formation of regularly-shaped, -sized, and -patterned solid forms known as crystals. of the large parent body ~4.56 b.y. ago. By ~4.47 b.y. ago, crustal remelting had occurred and metal–silicateThe most abundant group of minerals in Earth's crust, the structure of silicates are dominated by the silica tetrahedron, SiO44-, with metal ions occurring between tetrahedra). The mesodesmic bonds of the silicon tetrahedron allow extensive polymerization and silicates are classified according to the amount of linking that occurs between the mixing was taking place. This was followed by a period of impact-melting and metamorphism until 3.9 b.y. ago, by which time the brecciated nature of the mesosiderite parent body was established. It was at this time, 3.9 b.y. ago, that a major thermal event occurred, raising temperatures to as high as 500°C. A likely cause for this event is the collisional disruption and gravitational reassembly of the asteroid. The surface breccias were buried under a deep regolithMixture of unconsolidated rocky fragments, soil, dust and other fine granular particles blanketing the surface of a body lacking an atmosphere. Regolith is the product of "gardening" by repeated meteorite impacts, and thermal processes (such as repeated heating and cooling cycles).   where slow cooling and annealing proceeded. Subsequent impacts excavated this deeply buried material and some of it was ejected into space, establishing a range of cosmic-ray exposure ages for mesosiderites of ~10–340 m.y. Dalgaranga has a Sm–Gd-based CRE age of <10 m.y. (Begemann et al., 1976). A more outdated theory has the basaltic crustOutermost layer of a differentiated planet, asteroid or moon, usually consisting of silicate rock and extending no more than 10s of km from the surface. The term is also applied to icy bodies, in which case it is composed of ices, frozen gases, and accumulated meteoritic material. On Earth, the of a molten parent body founder and sink through the mantleMain silicate-rich zone within a planet between the crust and metallic core. The mantle accounts for 82% of Earth's volume and is composed of silicate minerals rich in Mg. The temperature of the mantle can be as high as 3,700 °C. Heat generated in the core causes convection currents in to the metallic core where mixing occurred. Subsequent collisions exposed this stony-iron layer and delivered fragments to Earth. It is notable that the O-isotopic values of the mesosiderites are almost identical to those of the HED suite of meteorites, implying that a genetic link exists between these disparate groups (Greenwood et al., 2006). Conversely, multiple line of evidence indicate that separate parent bodies were probably involved. The Dalgaranga specimen shown above is a 20 g end section exhibiting a silicate groundmass with a high abundance of metallic grains, but lacking any of the larger silicate or metallic inclusions observed in most larger cut sections of Dalgaranga. The photo below shows the shallow Dalgaranga Crater with bedrock basement. 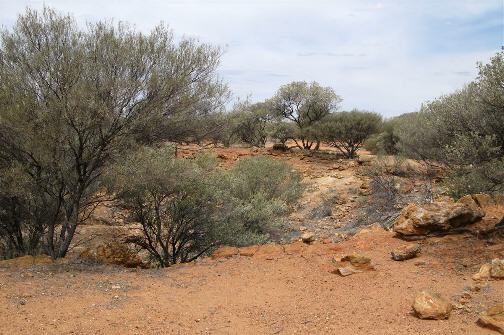 Photo courtesy of Valdi (The Life of Valdi—Blogger)