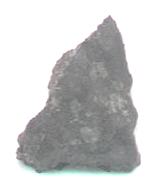 Found Spring 2000
~28° N., ~16° E. A single 40.03 g ureilite meteoriteWork in progress. A solid natural object reaching a planet’s surface from interplanetary space. Solid portion of a meteoroid that survives its fall to Earth, or some other body. Meteorites are classified as stony meteorites, iron meteorites, and stony-iron meteorites. These groups are further divided according to their mineralogy and was found in the Libyan Sahara Desert. As with most ureilites, DaG 868 is composed of grains of olivineGroup of silicate minerals, (Mg,Fe)2SiO4, with the compositional endpoints of forsterite (Mg2SiO4) and fayalite (Fe2SiO4). Olivine is commonly found in all chondrites within both the matrix and chondrules, achondrites including most primitive achondrites and some evolved achondrites, in pallasites as large yellow-green crystals (brown when terrestrialized), in the silicate portion (82 vol%) and pigeonite (11 vol%) along with carbonaceous material forming rims and veins. The small amount of metalElement that readily forms cations and has metallic bonds; sometimes said to be similar to a cation in a cloud of electrons. The metals are one of the three groups of elements as distinguished by their ionization and bonding properties, along with the metalloids and nonmetals. A diagonal line drawn present has been extremely weathered. The olivine in DaG 868 has a high CaO content and a high fayalitePure* iron end-member (Fe2SiO4) of the olivine solid solution series and an important mineral in meteorites. When iron (Fe) is completely substituted by magnesium, it yields the the pure Mg-olivine end-member, forsterite (Mg2SiO4). The various Fe and Mg substitutions between these two end-members are described based on their forsteritic (Fo) value of 20.6, which places it in Berkley’s subgroup I and Goodrich’s subgroup 1.