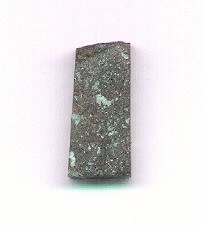 A single mass of 3,636 g was found by a German team in the Ténéré region of the Sahara Desert in north-central Niger, specifically, at a location known as Grein. Provisionally named Te-1, it was classified by J. Otto and A. Ruh (Universitat Freiburg) as a metal-rich, coarse-grained, primitive achondriteAchondrite with an almost chondritic composition with age similar to the primordial chondrites. These should be better classified as "metachondrites".. OlivineGroup of silicate minerals, (Mg,Fe)2SiO4, with the compositional endpoints of forsterite (Mg2SiO4) and fayalite (Fe2SiO4). Olivine is commonly found in all chondrites within both the matrix and chondrules, achondrites including most primitive achondrites and some evolved achondrites, in pallasites as large yellow-green crystals (brown when terrestrialized), in the silicate portion grains are mostly 0.1–0.4 mm in size, but larger grains occur. They commonly exhibit triple-junctions, consistent with recrystallization. Large poikilitic pyroxeneA class of silicate (SiO3) minerals that form a solid solution between iron and magnesium and can contain up to 50% calcium. Pyroxenes are important rock forming minerals and critical to understanding igneous processes. For more detailed information, please read the Pyroxene Group article found in the Meteoritics & Classification category. grains are present, as well as small agglomerates of crystals, sometimes called ‘Sammelkristalle’, which usually form during melting and recrystallization processes. Unlike chondrulesRoughly spherical aggregate of coarse crystals formed from the rapid cooling and solidification of a melt at  ~1400 ° C. Large numbers of chondrules are found in all chondrites except for the CI group of carbonaceous chondrites. Chondrules are typically 0.5-2 mm in diameter and are usually composed of olivine, these structures are composed primarily of plagioclaseAlso referred to as the plagioclase feldspar series. Plagioclase is a common rock-forming series of feldspar minerals containing a continuous solid solution of calcium and sodium: (Na1-x,Cax)(Alx+1,Si1-x)Si2O8 where x = 0 to 1. The Ca-rich end-member is called anorthite (pure anorthite has formula: CaAl2Si2O8) and the Na-rich end-member is albite poikilitically enclosing minor olivines and pyroxenes, and are often accompanied by FeNi-metal. Te-1 is a freshly fallen meteoriteWork in progress. A solid natural object reaching a planet’s surface from interplanetary space. Solid portion of a meteoroid that survives its fall to Earth, or some other body. Meteorites are classified as stony meteorites, iron meteorites, and stony-iron meteorites. These groups are further divided according to their mineralogy and with a weathering grade of W0, and it has a shock stageA petrographic assessment, using features observed in minerals grains, of the degree to which a meteorite has undergone shock metamorphism. The highest stage observed in 25% of the indicator grains is used to determine the stage. Also called "shock level".               of S1–2.This primitive achondriteAn achondrite is a type of stony meteorite whose precursor was of chondritic origin and experienced metamorphic and igneous processes. They have a planetary or differentiated asteroidal origin where the chondritic parent body reached a sufficient size that through heating due to radioactive decay of 26Al (aluminum isotope) and gravitational has a chemical and mineralInorganic substance that is (1) naturally occurring (but does not have a biologic or man-made origin) and formed by physical (not biological) forces with a (2) defined chemical composition of limited variation, has a (3) distinctive set of of physical properties including being a solid, and has a (4) homogeneous composition unlike that of any other meteorite. It has an O-isotopic composition distinct from any other achondrite group, plotting within the CR-field, and interestingly, very near to that of the ungroupedModifying term used to describe meteorites that are mineralogically and/or chemically unique and defy classification into the group or sub-group they most closely resemble. Some examples include Ungrouped Achondrite (achondrite-ung), Ungrouped Chondrite (chondrite-ung), Ungrouped Iron (iron-ung), and Ungrouped Carbonaceous (C-ung). basaltic meteorite NWA 011. OxygenElement that makes up 20.95 vol. % of the Earth's atmosphere at ground level, 89 wt. % of seawater and 46.6 wt. % (94 vol. %) of Earth's crust. It appears to be the third most abundant element in the universe (after H and He), but has an abundance only isotopes are similar to those of the lodraniteRare type of primitive achondrite named after the Lodran meteorite that fell in Pakistan in 1868. Initially, lodranites were grouped with the stony-iron meteorites because they contain silicates (olivine, orthopyroxene, and minor plagioclase) and Fe-Ni metal in nearly equal proportions. However, since discovery of the closely related acapulcoite group, lodranites/acapulcoite parent bodyThe body from which a meteorite or meteoroid was derived prior to its ejection. Some parent bodies were destroyed early in the formation of our Solar System, while others like the asteroid 4-Vesta and Mars are still observable today. but are not an exact match. The mineral composition and noble gasElement occurring in the right-most column of the periodic table; also called "inert" gases. In these gases, the outer electron shell is completely filled, making them very unreactive. content of Te-1 are very similar to that of the brachinites and the brachinite-like meteorite, Divnoe; moreover, the olivine and pyroxene compositions are nearly identical to those of Brachina. Furthermore, the composition of chromiteBrownish-black oxide of chromium and iron (Cr-Fe oxide), Cr2FeO4, found in many meteorite groups. and metalElement that readily forms cations and has metallic bonds; sometimes said to be similar to a cation in a cloud of electrons. The metals are one of the three groups of elements as distinguished by their ionization and bonding properties, along with the metalloids and nonmetals. A diagonal line drawn in Te-1 is also indicative of a very close relationship with Divnoe. These varied characteristics are most consistent with the grouping of Te-1 as a brachinite-like primitive achondrite. See the Tafassasset page for further information.

Te-1 has a CRE age of 45 m.y. The specimen shown above is a 1.72 g partial slice with fresh fusion crustMelted exterior of a meteorite that forms when it passes through Earth’s atmosphere. Friction with the air will raise a meteorite’s surface temperature upwards of  4800 K (8180 °F) and will melt (ablate) the surface minerals and flow backwards over the surface as shown in the Lafayette meteorite photograph below. on one end. The photo below shows the main massLargest fragment of a meteorite, typically at the time of recovery. Meteorites are commonly cut, sliced or sometimes broken thus reducing the size of the main mass and the resulting largest specimen is called the "largest known mass". of Te-1 with an end slice removed. 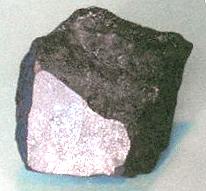