Martian ShergottiteIgneous stony meteorite with a Martian origin consisting mainly of plagioclase (or a shocked glass of plagioclase composition) and pyroxene. They are the most abundant type of SNC meteorites and the type member is the Shergotty meteorite, which fell in India in 1865. Shergottites are igneous rocks of volcanic or
high-Al basaltBasalt is the most common extrusive igneous rock on the terrestrial planets. For example, more than 90% of all volcanic rock on Earth is basalt. The term basalt is applied to most low viscosity dark silicate lavas, regardless of composition. Basalt is a mafic, extrusive and fine grained igneous rock ∗
(enriched, maficOne of the two broad categories of silicate minerals, the other being felsic, based on its magnesium (Mg) and/or iron (Fe) content. Mafic indicates silicate minerals that are predominantly comprised of Mg and/or Fe.The term is derived from those major constituents: Magnesium + Ferrum (Latin for iron) + ic (having, melt rock)

click on photos for a magnified view Found June 17, 2000
18° 9.5′ N., 54° 6.8′ E. A single small stone weighing 15 g was found in the Dhofar region of Oman. Dhofar 378 is a fresh meteoriteWork in progress. A solid natural object reaching a planet’s surface from interplanetary space. Solid portion of a meteoroid that survives its fall to Earth, or some other body. Meteorites are classified as stony meteorites, iron meteorites, and stony-iron meteorites. These groups are further divided according to their mineralogy and that was almost completely covered with black fusion crustMelted exterior of a meteorite that forms when it passes through Earth’s atmosphere. Friction with the air will raise a meteorite’s surface temperature upwards of  4800 K (8180 °F) and will melt (ablate) the surface minerals and flow backwards over the surface as shown in the Lafayette meteorite photograph below.. Analyses performed at the Max–Planck–Institute in Germany, and the Chiba Institute of Technology in Japan, have revealed that this meteorite consists predominantly of ferroan clinopyroxenes (49 vol%) and plagioclaseAlso referred to as the plagioclase feldspar series. Plagioclase is a common rock-forming series of feldspar minerals containing a continuous solid solution of calcium and sodium: (Na1-x,Cax)(Alx+1,Si1-x)Si2O8 where x = 0 to 1. The Ca-rich end-member is called anorthite (pure anorthite has formula: CaAl2Si2O8) and the Na-rich end-member is albite in the form of maskelyniteNatural glass composed of isotropic plagioclase produced during shock metamorphism (not melting) at pressures of ~30 GPa. Maskelynite is commonly found in shergottites though also found in some ordinary chondrites, HED and lunar meteorites. It is also found in association with meteorite impact craters and crater ejecta. Named after British (47 vol%). An unnamed mass of 209.1 g is reported to be paired.

Throughout this meteorite, large vesicles (~1 mm diameter) occur within areas of blackened maskelynite. This maskelynite exhibits flow textures and recrystallized fibrous, crystalline, needle-like textures (Mikouchi and McKay, 2003). It often exhibits zoning, from K-, Na-rich cores to Ca-rich rims. In addition, rare areas of K-, Na-rich clear glass are accompanied by quenched rims and recrystallized plagioclase, along with ‘bubble-like pores’ (Ikeda et al., 2006). The presence of these petrographic features, which are similar in many respects to those observed in the martian meteoriteOver 30 of the meteorites found on Earth almost certainly came from Mars (see http://www.imca.cc/mars/martian-meteorites.htm and http://www2.jpl.nasa.gov/snc/). All but one belongs to the group known as SNC meteorites, which includes the shergottites, nakhlites, and chassignites. SNC meteorites contain minerals that crystallized within the past 1.35 to 0.15 Ga, making them NWA 4797 (Walton et al., 2009), is indicative of strong impact-shock effects. Experiments have demonstrated that these features are consistent with a shock force of 55–75 GPa (Ikeda et al., 2006), heating to temperatures of >1,000°C, and a post-shock cooling rate of ~2.5°C/hour (Mikouchi et al., 2006). Some of the minor minerals present in Dhofar 378 include ilmeniteTi-Fe oxide, TiFeO3, found in achondrites, lunar mare basalts, and shergottites. Ilmenite forms as a primary mineral in mafic igneous rocks. It crystallizes relatively early out of a magma before most of the other minerals, and as a result, the heavier crystals of ilmenite precipitate to the bottom of the magma, phosphates, hedenbergite, fayalitePure* iron end-member (Fe2SiO4) of the olivine solid solution series and an important mineral in meteorites. When iron (Fe) is completely substituted by magnesium, it yields the the pure Mg-olivine end-member, forsterite (Mg2SiO4). The various Fe and Mg substitutions between these two end-members are described based on their forsteritic (Fo), silicaSilicon dioxide, SiO2., Ti-rich magnetiteFe oxide, Fe2+Fe3+2O4, containing oxidized iron (Fe3+) found in the matrix of carbonaceous chondrites and as diagnostic component in CK chondrites. In CK chondrites, magnetite is typically chromian, containing several wt. % Cr2O3., sulfide, and pyroxferroite.

The chemistry and mineralogy of Dhofar 378 is consistent with its formation through a late-stage fractional crystallizationA crystallization process in which minerals crystallizing from a magma are isolated from contact with the liquid. It is a key process in the formation of igneous rocks during the process of magmatic differentiation. Also known as crystal fractionation. process, and is quite similar to that of Los Angeles 001/002. A severe impact-shock event on Mars resulted in the maskelynization of plagioclase and other shock-induced features. In a subsequent event, at initially high temperatures, the recrystallization of some plagioclase grains ensued, promoted by slow cooling conditions. Although the Dhofar 019 shergottite has similar igneous textures, it is much more magnesian than Dhofar 378, and the two are not paired. Noble gasElement occurring in the right-most column of the periodic table; also called "inert" gases. In these gases, the outer electron shell is completely filled, making them very unreactive. data also confirm that these two are not paired, in that Dhofar 019 has a CRE age of ~16.7 m.y. while that of Dhofar 378 is ~2 m.y.

Cosmic ray exposure ages have now been determined for many martian meteorites, and Mahajan (2015) compiled a chart based on the reported CRE ages for 53 of them. He concluded that together these 53 meteorites represent 10 distinct impact events which occurred 0.92 m.y., 2.12 m.y., 2.77 m.y., 4.05 m.y., 7.3 m.y., 9.6 m.y., 11.07 m.y., 12.27 m.y., 15 m.y., and 16.73 m.y.—see his chart here. It was argued that Dhofar 378 was launched from Mars during the 2.12 m.y.-old impact event. In a subsequent review based on multiple criteria, Irving et al. (2017 [#2068]) made a new determination of the number of separate launch events associated with the known (101 at the time of their study) martian meteorites. They speculate that the number could be as few as twenty, and suggest that Dhofar 378 and at least 26 other enriched olivine-free mafic shergottitesIgneous stony meteorite with a Martian origin consisting mainly of plagioclase (or a shocked glass of plagioclase composition) and pyroxene. They are the most abundant type of SNC meteorites and the type member is the Shergotty meteorite, which fell in India in 1865. Shergottites are igneous rocks of volcanic or were probably ejected in a few separate impact events ~2–5 m.y. ago.

Utilizing Sm–Nd chronometry, Nyquist et al. (2018) determined a crystallizationPhysical or chemical process or action that results in the formation of regularly-shaped, -sized, and -patterned solid forms known as crystals. age for Dhofar 378 of 157 (±23) m.y., which is within uncertainty of the age determined for samples of Los Angeles 001 and 002 (172 [±8] m.y. and 173 [±24] m.y., respectively). The εNd values for the three meteorite samples are also identical within error (–6.5 [±0.3], –6.3 [±0.2], and –6.1 [±0.6], respectively). In addition, Rb–Sr age data were calculated for all three meteorites and found to be similar among them within uncertainties, corresponding to ages of ~159 m.y., 165 (±7) m.y., and 158 (±15) m.y. for Dhofar 378, Los Angeles 001, and Los Angeles 002, respectively. The Ar–Ar age calculated for Dhofar 378 of ~141 m.y. probably dates the severe impact-induced shock-heating event, while various scenarios have been proposed to explain how this chronometer avoided being reset at the time of ejection ~2 m.y. ago (Park and Bogard, 2006). Noble gas data (21Ne and 38Ar) for Dhofar 378 was obtained by Park and Nagao (2006) to ascertain the CRE age. Their results suggest that this meteorite may have been ejected in a different impact event from that of either Los Angeles or the compositionally similar Ksar Ghilane 002 shergottite.

Satake et al. (2010) utilized the MELTS software program to better understand the parental magmaMolten silicate (rock) beneath the surface of a planetary body or moon. When it reaches the surface, magma is called lava. composition of the enriched shergottites Dhofar 378 and Los Angeles, both of which are plagioclase-rich melt rocks. They determined that the starting melt composition of Dhofar 378 and Los Angeles could have been derived from the residual melt of the non-poikilitic areas within the enriched poikilitic shergottite NWA 4468 at 1090°C, suggesting that all these shergottites might share a common magmatic origin.

The specimen of Dhofar 378 shown above is a 0.11 g partial slice containing dark areas and veins composed of maskelynite. Along the top of the specimen the fusionProcess in which two lighter atomic nuclei combine to form a heavier atomic nucleus. Very high temperatures are normally required in order for atomic nuclei to collide with sufficient energy to overcome the Coulomb barrier (their mutual electrostatic repulsions). Fusion that occurs under high-temperature conditions is called thermonuclear fusion. Fusion crustOutermost layer of a differentiated planet, asteroid or moon, usually consisting of silicate rock and extending no more than 10s of km from the surface. The term is also applied to icy bodies, in which case it is composed of ices, frozen gases, and accumulated meteoritic material. On Earth, the is interrupted by a mass of clear glass. The photo below shows a larger slice of this unique martian meteorite, courtesy of S. and E. Haiderer. 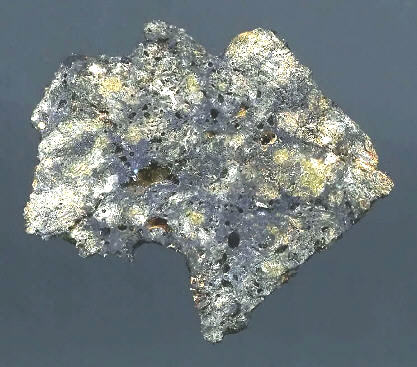