Lunar MaficOne of the two broad categories of silicate minerals, the other being felsic, based on its magnesium (Mg) and/or iron (Fe) content. Mafic indicates silicate minerals that are predominantly comprised of Mg and/or Fe.The term is derived from those major constituents: Magnesium + Ferrum (Latin for iron) + ic (having, Th-rich, Impact-Melt BrecciaWork in Progress ... A rock that is a mechanical mixture of different minerals and/or rock fragments (clasts). A breccia may also be distinguished by the origin of its clasts: (monomict breccia: monogenetic or monolithologic, and polymict breccia: polygenetic or polylithologic). The proportions of these fragments within the unbrecciated material
(KREEP-melt regolithMixture of unconsolidated rocky fragments, soil, dust and other fine granular particles blanketing the surface of a body lacking an atmosphere. Regolith is the product of "gardening" by repeated meteorite impacts, and thermal processes (such as repeated heating and cooling cycles).   breccia) 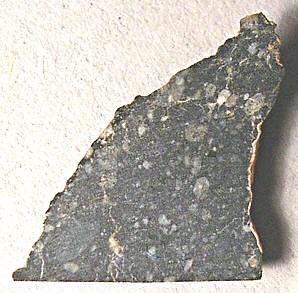 Found Summer of 2006
no coordinates recorded Two paired stones weighing 64.3 g (NWA 4472) and 188 g (NWA 4485) were found in the Algerian desert and subsequently purchased by separate collectors (G. Hupé and S. Ralew, respectively). A portion of each was submitted for analysis to the University of Washington in Seattle (S. Kuehner and A. Irving) and Washington University in St. Louis (R. Korotev), and the meteoriteWork in progress. A solid natural object reaching a planet’s surface from interplanetary space. Solid portion of a meteoroid that survives its fall to Earth, or some other body. Meteorites are classified as stony meteorites, iron meteorites, and stony-iron meteorites. These groups are further divided according to their mineralogy and was classified as a unique KREEP-rich, basaltic melt breccia.

Image credit: A. Calzada-Diaz et al.
MAPS, vol. 50, #2, p. 220 (2015)
‘Constraining the source regions of lunar meteorites using orbital geochemical data’
(http://dx.doi.org/10.1111/maps.12412) Establishment of a thorough chronological history of this lunar rock following the initial basin-forming impact, and including the time spent on the lunar surface, in Moon–Earth transitWhen a small celestial body moves in front of a much larger one (as when Mercury or Venus appears in silhouette against the solar disk or when a satellite passes in front of Jupiter or Saturn). The shadow of a satellite may also transit the disk of its primary., and in terrestrial residence has begun (Joy et al., 2009). Cosmogenic Ar–Ar data are indicative of a ~300 m.y. near-surface residence as part of the ancient lunar regolith. The Pb–Pb and U–Pb ages were calculated from the phosphates fluorapatite and merrillite in matrix and basalt clasts, as well as from zirconOrthosilicate mineral, Zr(SiO4), observed in all terrestrial rocks type and in ordinary chondrites, eucrites, mesosiderites, and lunar rocks. grains in the KREEP basalt component (Joy et al., 2011). The ages found within this regolith breccia reflect a diversity of lithic fragments with a wide range of crystallizationPhysical or chemical process or action that results in the formation of regularly-shaped, -sized, and -patterned solid forms known as crystals. ages (~4.35–3.94 b.y.); the younger ages in this range are consistent with those of Apollo KREEPy mare basalts possibly dating the formation of Mare Imbrium, while the oldest ages were derived from a matrix apatite grain and might reflect the crystallization of the HAS lithology. The lower Ar–Ar apparent age of 1.7–2.2 b.y. obtained for trapped solar windSupersonic flow of high-speed charged particles continuously blowing off a star (mostly e- and p+). When originating from stars other than the Sun, it is sometimes called a "stellar" wind. The solar wind may be viewed as an extension of the corona into interplanetary space. The solar wind emanates radially Ar is thought to reflect a recent impact-resetting event which could represent the consolidation of the NWA 4472/4485 meteorite components. A more thorough treatment of the chemical classification of lunar meteorites can be found on the WUSL—Lunar Meteorites website, including information on the other (unpaired) KREEP-rich meteorites SaU 169 and Dhofar 961/960/925/SaU 449, the KREEPy clastA mineral or rock fragment embedded in another rock. bearing meteorites Calcalong Creek and Y-983885, and the KREEP basalt meteorites comprising the NWA 733 pairing group, the LAP pairing group, and Dhofar 287a. NWA 4472/4485 contains Sr and Ba indicative of terrestrial weathering. Both portions of the meteorite also contain high Br concentrations, suggesting that they were contaminated by seawater. The photo of NWA 4485 shown above is a 0.32 g partial slice, while that pictured below is the uncut mass as found (both photos courtesy of Chladni’s-Heirs.com). 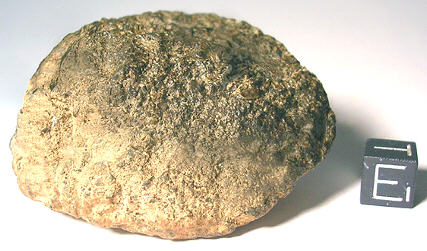