Lunar Feldspathic BrecciaWork in Progress ... A rock that is a mechanical mixture of different minerals and/or rock fragments (clasts). A breccia may also be distinguished by the origin of its clasts: (monomict breccia: monogenetic or monolithologic, and polymict breccia: polygenetic or polylithologic). The proportions of these fragments within the unbrecciated material
(granulitic breccia) 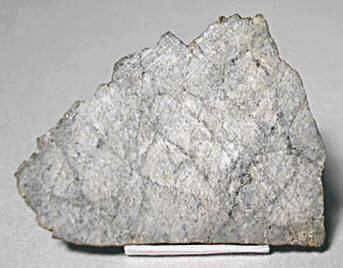 Found August 2005
no coordinates recorded Initially, a fresh, fusion-crusted stone weighing 1,634 g was found in the Mauritania–Algeria desert region. The meteoriteWork in progress. A solid natural object reaching a planet’s surface from interplanetary space. Solid portion of a meteoroid that survives its fall to Earth, or some other body. Meteorites are classified as stony meteorites, iron meteorites, and stony-iron meteorites. These groups are further divided according to their mineralogy and exhibited a thin, translucent, greenish fusion crustMelted exterior of a meteorite that forms when it passes through Earth’s atmosphere. Friction with the air will raise a meteorite’s surface temperature upwards of  4800 K (8180 °F) and will melt (ablate) the surface minerals and flow backwards over the surface as shown in the Lafayette meteorite photograph below. with clasts visible underneath. The stone was purchased by G. Hupé and a portion was submitted for analysis to the University of Washington in Seattle (A. Irving and S. Kuehner) and Washington University in St. Louis (R. Korotev). The meteorite, designated NWA 3163, was classified as a rare feldspathic granulitic breccia, similar samples of which were recovered at most Apollo lunar highlandsThe highly cratered, topographically high, ancient crust of the Moon. This region is composed mostly of anorthosite, a plagioclase-rich rock. sites. This meteorite has the composition of a noritic anorthositeA phaneritic, intrusive igneous rock made with a modal composition (i.e. volume%) > 90% plagioclase feldspar of undefined composition (anorthitic to albitic, or combination thereof), and a small mafic component between 0 - 10% such as pyroxene, ilmenite, magnetite, and olivine 1. The name anorthosite is derived from the calcium-rich. Subsequent to this classification, 12 additional paired fragments from the strewn fieldArea on the surface containing meteorites and fragments from a single fall. Also applied to the area covered by tektites, which are produced by large meteorite impacts. Strewnfields are often oval-shaped with the largest specimens found at one end. Given that the largest specimens go the greatest distance, a meteoroid's were acquired by S. Ralew, and these submitted samples were given NWA-series designations of NWA 4483 (208 g) and NWA 4881 (606 g). An additional 5 fragments weighing together 1.3 g was designated NWA 6275. It was determined that these four meteorites, which constitute a single stone having a weight of 2,449 g, have compositions that overlap each other, and these NWA-designated stones are considered to be paired. An additional 57.2 g unnamed stone that was found in 2008 is possibly source-crater paired (R. Korotev; see WUSL website).

Northwest Africa 3163/4483/4881 (NWA 4483) is a feldspathic, granulitic, metamorphosed breccia or impactiteSlag-like glassy object found on surface of the Earth formed from rock melted by the impact of a meteor. This word is also applied to rocks that have been affected by impact (impact breccia, suevite, etc.) The backscattered electron photograph below shows the impactite’s complex internal structure. from the lunar highlands (Irving et al., 2006). Its low content of incompatible elements attests to an origin far from the KREEP-rich PKT region (Fernandes et al., 2009). By comparison, Apollo granulitic breccias have trace and siderophile elementLiterally, "iron-loving" element that tends to be concentrated in Fe-Ni metal rather than in silicate; these are Fe, Co, Ni, Mo, Re, Au, and PGE. These elements are relatively common in undifferentiated meteorites, and, in differentiated asteroids and planets, are found in the metal-rich cores and, consequently, extremely rare on contents, Ar–Ar ages, and shock effects that indicate they were derived from a different region from that of the NWA 4483 pairing group (Hudgins et al., 2011). Northwest Africa 4483 is composed of ~70 vol% plagioclaseAlso referred to as the plagioclase feldspar series. Plagioclase is a common rock-forming series of feldspar minerals containing a continuous solid solution of calcium and sodium: (Na1-x,Cax)(Alx+1,Si1-x)Si2O8 where x = 0 to 1. The Ca-rich end-member is called anorthite (pure anorthite has formula: CaAl2Si2O8) and the Na-rich end-member is albite that encloses small grains of pyroxeneA class of silicate (SiO3) minerals that form a solid solution between iron and magnesium and can contain up to 50% calcium. Pyroxenes are important rock forming minerals and critical to understanding igneous processes. For more detailed information, please read the Pyroxene Group article found in the Meteoritics & Classification category. (pigeoniteLow-Ca clinopyroxene, (Ca,Mg,Fe)SiO3, found as a major mineral in eucrites and shergottites. In order to be considered pigeonite, the clinopyroxene must contain 5 to 20 mol % of calcium (Wo5 - 20). Chondrites of petrologic types 4 and below contain significant low-Ca clinopyroxene. During metamorphism to higher temperatures, all existing with minor augiteHigh-Ca clinopyroxene, (Ca,Mg,Fe)SiO3, that occurs in many igneous rocks, particularly those of basaltic composition. In order to be considered augite, the clinopyroxene must contain 20 to 45 mol % of calcium (Wo20 - 45). An important and unique Martian meteorite is NWA 8159, that has been classified as an augite basalt.), olivineGroup of silicate minerals, (Mg,Fe)2SiO4, with the compositional endpoints of forsterite (Mg2SiO4) and fayalite (Fe2SiO4). Olivine is commonly found in all chondrites within both the matrix and chondrules, achondrites including most primitive achondrites and some evolved achondrites, in pallasites as large yellow-green crystals (brown when terrestrialized), in the silicate portion, and accessory minerals. Maskelynized anorthitic plagioclase is present in shock veins and pockets throughout (S3), but they are thought to antedate the ejection event which launched the meteoroidSmall rocky or metallic object in orbit around the Sun (or another star). to Earth. Precursor material to this granulitic breccia was probably a mixture of anorthositic rocks, including components of the ferroan anorthositic suite and the feldspathic Mg-suite, derived in part from olivine gabbroic to diabasic lithologies located within the upper layers of the lunar highlands. While the KREEP-poor feldspathic fragmental breccias are texturally and compositionally similar to the granulitic breccias, only the latter experienced significant thermal metamorphism at depth where temperatures reached ~1070°C. Lunar granulites cooled rapidly at shallow depths (<200 m) and are associated with small impact craters. MetamorphicRocks that have recrystallized in a solid state due to changes in temperature, pressure, and chemical environment. textures were developed beneath an ejecta blanketGenerally symmetrical apron of ejecta surrounding a crater; it is thick at the crater's rim and thin to discontinuous at the blanket's outer edge. or at the base of the craterBowl-like depression ("crater" means "cup" in Latin) on the surface of a planet, moon, or asteroid. Craters range in size from a few centimeters to over 1,000 km across, and are mostly caused by impact or by volcanic activity, though some are due to cryovolcanism. near impact-melts. A division of the granulites into three groups has been proposed by Cushing et al. (1999). Poikilitic types are coarse-grained and were cooled from impact-melt sheets. Poikilitic–granoblastic (or poikiloblastic) types, similar to NWA 4483, have smaller grain sizes and generally represent metamorphic textures, while possibly experiencing some minor melting. Granoblastic types are metamorphosed fragmental breccias with very fine-grained, equant, granular, hornfelsic textures and prevalent 120° triple junctions. Granoblastic types have undergone recrystallization and grain coarsening by Ostwald ripening during annealing, and this process has enabled investigators to estimate the cooling rate to be relatively rapid at 0.5–50°C/year. Cushing et al. (1999) used this cooling rate to provide a rough estimate for the burial depth of the granoblastic granulites, which they determined ranged from 20 m for the fastest rate, to 200 m for the slowest rate. By determining the metamorphism rate which would be associated with these cooling rates and burial depths, they arrived at a minimum crater diameter of 30–90 km. The NWA 4483 granulite is thought to have been buried even deeper within the lunar crust—up to tens of km deep (Irving et al., 2006). The Rb–Sr chronometer places the separation of the melt from its source reservoir at 4.56 (±1.2) 0.1 b.y. ago. The Ar–Ar-based age was calculated to be ~3.327(±0.029) b.y., which reflects late impact resetting of this isotopic chronometer associated with extensive metamorphism at depth—possibly recording the event that produced the granulitic texture (McLeod et al. 2013). An even younger Ar–Ar age of ~2 b.y. was calculated for the paired NWA 4881. The CRE age was calculated to be 14.5 (±1.2) m.y. A terrestrial residence age of 12,000 years has been measured for NWA 4483 (Fernandes et al., 2009 and references therein). The photo shown above is a 1.522 g slice of NWA 4483. The top two photos below show both sides of an uncut 42.387 g stone from the NWA 3163/4483/4881 pairing group. The next photo shows many of the individual stones which comprise the pairing group. The bottom photo is a close-up view of the large 606 g NWA 4881 paired stone. 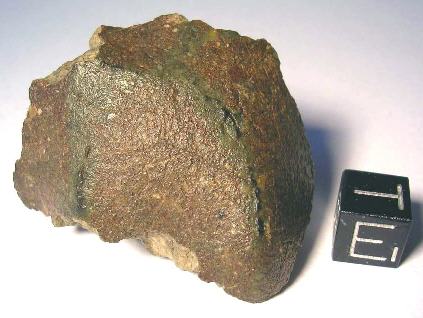 click on photo for a magnified view
42.387 g stone with primary fusionProcess in which two lighter atomic nuclei combine to form a heavier atomic nucleus. Very high temperatures are normally required in order for atomic nuclei to collide with sufficient energy to overcome the Coulomb barrier (their mutual electrostatic repulsions). Fusion that occurs under high-temperature conditions is called thermonuclear fusion. Fusion crustOutermost layer of a differentiated planet, asteroid or moon, usually consisting of silicate rock and extending no more than 10s of km from the surface. The term is also applied to icy bodies, in which case it is composed of ices, frozen gases, and accumulated meteoritic material. On Earth, the 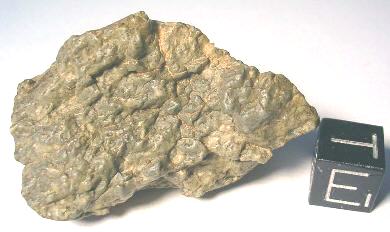 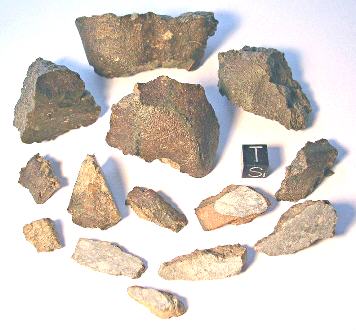 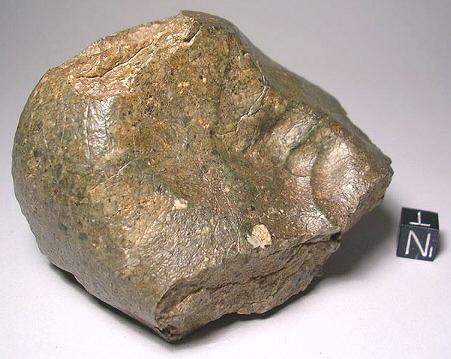